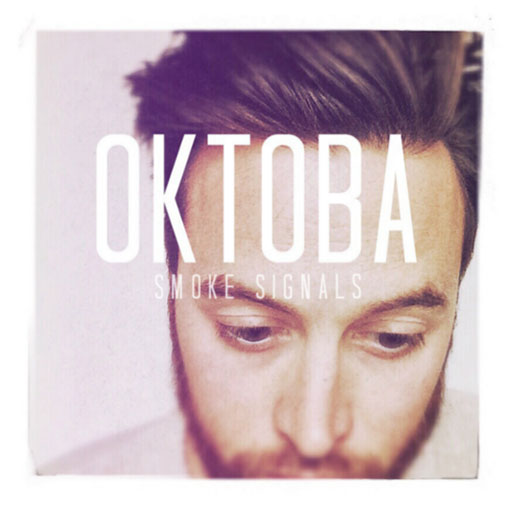 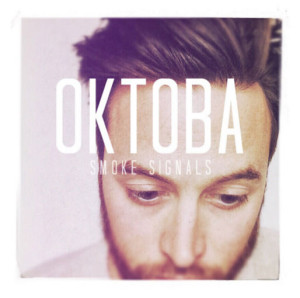 The ancient communication technique of smoke signalling has many uses, two of which include: a warning of danger and bringing people together. In a double edged sword way, the title of Oktoba‘s (Chris Arthorne) debut album ‘Smoke Signals‘ lives up to it’s name.

Whilst a lot of voices nowadays are clouded by sonic effects, Arthorne’s is pure and clear with every grain of lyric equally audible. He excels at narrating themes that can resonate to a maximum audience and hinge connections; particularly because they are delivered, emotionally charged. Arthorne is on the verge of crying on ‘Aeroplane‘ and mentions such action on ‘I’ll Be Fine’ and ‘You and Me’- and with an autobiographical influence.

‘Something New‘ is about the fear of change and travelling with the bare minimum; “I’ve got clothes on my back and a heart of love.” It could be reflective of Arthorne’s adoption of Brighton after moving from his Suffolk home town of Bury St Edmunds and his decision to go into acoustic solo territory away from his grittier blues rock band is fittingly called This Boy Wonders. Whilst on the title track he speaks to his late father about the family he left behind with the kind of respect and assurance that Ibeyi gave on their own paternal tribute. It’s essentially about impermanence and independence. Arthorne confessed in an interview that his best songs are spontaneous yet universal observations and it’s easy to imagine the songwriter with pen in hand sitting on a rock adjacent to Brighton pier in ‘On My Mind’ and ‘Run’ with their thalassic metaphors. “Waves crash into the storm, painting pictures as they form.”

For all the lyrical engagement, there’s a danger that that vocally and instrumentally Oktoba’s sound is too over-familiar. With smoke signals indicating it could be confined to inoffensive supermarket radio. It’s good to be thoughtful but a listener must care enough to investigate. Firstly, his romantic vocal style combined with charming prose might warm women’s hearts – e.g “my only thought is lying next to you” – but it’s too comparable to Ed Sheeran. For instance the singing key on ‘On My Mind’ is incredibly similar to the singer-songwriter’s ‘Thinking Out Loud’. Being a vocal doppelgänger isn’t always that bad, like in the case of The Migrant‘s Thom Yorke impersonation but in that scenario the genre package was different to it’s muse.

The Americana twang, piano and cello elements might add extra layers to his acoustic folk-pop and welcome fans of Villagers, Ásgeir and Bob Dylan but the formulaic structure of his songs – consisting of predictable near-silent bridges and jollier lifts – make his performances indistinguishable. Still, Sticks and Stones benefits from Lord Huron cooing and ‘Wind Fire Water Stone‘ is interesting when it includes a Dolly Parton-Kenny Rogers country-style duet with fellow Brighton resident singer Bo Lucas.

Arthorne altered the spelling of his birth month October to categorize himself away from a namesake hip hop artist but the level of his dedication to developing his own identity will be judged in the remainder of his career. In opposition to his misconstrued advice on single ‘Tongue Tied‘: don’t “ignore the warning signs and the writings on the wall.”