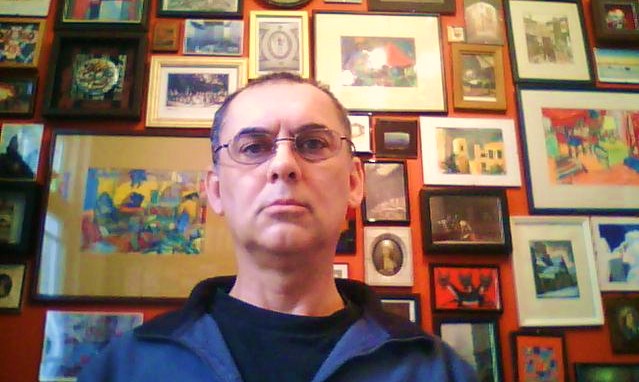 Leeds author John Lake is the writer of the ‘Leeds 6 Trilogy’ of novels, all set in the city where he grew up. The novels have earned praise from likes of best-selling writer David Peace, who described Lake as a ‘West Riding iconoclast’. Lake’s new novel, ‘Amy And The Fox’ is a departure from the series, set amongst the London middle class, and about a bereaved teacher struggling to come to terms with the accidental death of her husband. I spoke with John about the novel, and his work with Leeds-based ‘punk publishers’ Armley Press

Amy And The Fox is quite a departure from your Leeds 6 trilogy. Would you like to tell me what you feel the main themes of the book are?

One theme is certainly mortality. I wrote the first draft some years ago after being diagnosed with a life-threatening illness, wondering how my wife would deal with my death. In the end, she died first. Is that irony? I don’t know. More importantly, though, it’s about hypocrisy and forgiveness. A common human failing is to overlook the same faults in ourselves that we criticise in others. It’s the old beam in the eye story from the Bible. Another concern the book touches on is the prevalence of CCTV surveillance. We are constantly told that it’s there for our protection if we are law-abiding citizens but it clearly has the power to wreak havoc and ruin innocent lives as well.

Was it a conscious choice to write something outside of the world you created in Leeds 6?

In one sense, no. I’ve never seen myself as working in a particular genre, or writing about a particular fictional world, and the Leeds 6 Trilogy represents only half my output. However, I did live in London for twenty years and felt drawn to using it as a backdrop for something, so in that sense alone, it was a conscious decision.

Was it hard to leave the old characters behind?

Actually, I hadn’t. If memory serves me correctly (a big if!) I completed the first draft of Amy and the Fox before I wrote Speedbomb. I think I was taking a necessary break from those characters and that world, after which I was able to come back and write what I think is the best book in the trilogy.

As well as writing your own novels, you’re heavily involved with indie publishers Armley Press, through whom you publish your work (and for whom John selected my own novel for publication, in the interests of full disclosure). Tell us about how Armley Press came about, and what your role is.

Armley Press was set up by fellow ‘Leeds author’ Mick McCann in about 2007 for his book Coming Out as a Bowie Fan. It was at the beginning of the print-on-demand revolution, which drastically reduced printing costs and radicalised the publishing business model. Mick read my novel Hot Knife, which had been doing the rounds with a London agent, and immediately wanted to publish it. In 2014, after my wife died, I moved back to Leeds and offered to help reboot the company by finding new authors. Mostly, I commission new books from the submissions that we get and do all the copy editing.

Your first novel Hot Knife was the subject of much interest from the London publishing industry, before you eventually published through Armley Press. How do you view the current state of mainstream publishing?

It’s a business pure and simple, which means that it chases one goal only – profit. I’m not sure that mainstream publishers have ever cared very much about the state of literature or the quality of their output as long as they made money. Historically, many of the greats were spurned by big publishers and only got their start through self-publishing or small presses. Woolf, Lawrence, Joyce, Kafka – the list goes on. The mainstream publishers are risk-averse but always ready to cash in when it suits them. You can still see the same thing happening now. If a self-published author is selling shedloads of books online it won’t be long before a mainstream publisher is sniffing round them. It’s all about numbers. There’s not much passion for literature involved, and the vast bulk of what they put out won’t last much beyond Christmas.

As part of an indie publishers, what do you feel are the advantages and disadvantages of indie publishing, and how did you own experiences with Hot Knife inform how Armley Press in particular work?

I guess the advantage is that we have total artistic control. We can put out whatever book we want by whatever author we choose with whatever cover we like, and if that sounds bratty… well, we’re punk publishers! The costs of print-on-demand publishing are such that there isn’t much in the way of financial risk. But it takes time to build a good reputation and to spread the word. There isn’t a lot of money in it so far, but there’s a lot of love. And we’re publishing authors that in many cases have been rejected by bigger publishers not because of the quality of the writing but because of the subject matter and simply because we’re northerners.

What can we expect from Armley Press in the future?

In a nutshell, the dark and disturbing. And funny. The books lined up for early 2016 feature crime, vigilantism, mental health and magic realism as major themes, but we like jokes too. For instance, Mark Connors’ novel Stickleback has a protagonist who is institutionalised, yet it’s also hilariously vulgar in tone. We’re trying to make our website a fun, dynamic place to visit too, with new blogs and short stories going up all the time (go to armleypress.com). We’re also nurturing new young talent. Seeta Wrightson is a wonderfully explicit blogger/writer whose book Just Another Northern Girl, when it is finished, will be a little comic gem.

Back to your own writing, what’s next for you? The Leeds 6 trilogy has something of a cult following, will you revisit those characters in the future?

I’ve tentatively begun a new novel featuring Hamed, the hero of Speedbomb. It’s intended as a spinoff rather than another sequel, and may have nothing to do with Leeds at all. The main thing I’m working on is a story called ‘The Restaurant’. It’s pretty Kafkaesque. It will probably be novella length, so I’m thinking of putting it in a collection with my other ‘weird tales’. Being so busy with Armley Press, I’ve only written short stories lately. My life has taken some staggeringly unexpected turns in the last two years and I still have a lot of mental and emotional processing to do before another novel emerges out of any of it.