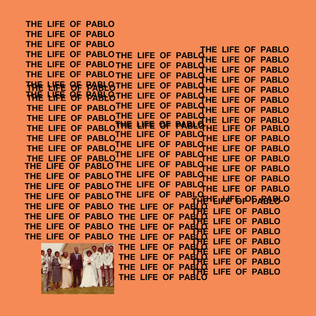 If there’s ever a name to divide a room and cause an instantaneous reaction, it’s Kanye West. With all of the publicity with every tweet he sends or newspaper quote that comes out of his mouth, it’s easy to forget he’s an actual artist and producer. It’s how he started his craft and what sets him apart from every other loud mouthed wannabe. His past two releases, 2010’s My Beautiful Dark Twisted Fantasy and 2013’s Yeezus were each a masterpiece in their own right, following West’s personal life and his ever-changing spectrum of insane creativity. The followup to ‘Yeezus’ has been closely watched, especially after previews with performances on TV and his “Good Friday” Soundcloud drops, and now we finally have some substance to the media circus that is Kanye West in 2016.

‘The Life of Pablo’ is, once again, a hype crushing album that delves into the psyche of, whether you like it or not, one of this generation’s greatest artists. There are reasons for this, it’s not pure speculation or subjectivity. No artist around currently puts as much effort into generating a persona or following like West. Which other current active artists carry out a full on fashion show at their album launch party at Madison Square Garden? West has the drive for results and follows it through. Of course this isn’t about West as a person, but it certainly does help to understand him as an artist.

‘…Pablo’ doesn’t consist of obvious singles like his previous releases, this is an album to be listened to consecutively.  Starting track, ’Ultralight Beam’, relies upon heavy religious themes, with gospel singing and thunderous drums that add to the power in the messages by backing vocals and samples. It’s sparse and relies upon the words rather than an elaborate musical accompaniment. Further into the album you may have seen various stories circulating about the track ‘Famous’ and one line in particular. All versions of the origin of this aside, it’s an incredibly strong track with samples that pretty much contradict everybody’s theories on how much a twat he actually is, but that’s a whole other article.

‘I Love Kanye’ shows West at his most playful, obviously referencing those who complain about his self-loving tendencies. People seem to forget that it’s personality as well as talent that sells records: West isn’t a monster himself, he’s just created one. He gives the people what they want and in return they give him what he wants, which is the numbers. ‘Real Friends’ gives us a glimpse into what happens when you’re Kanye West and your life is surrounded by those who want your success and not you as a person.

At nineteen tracks, which is also something that could potentially change with the amount of editing and experimenting West has been doing on an almost weekly basis since the albums launch, various tracks have been remixed or reworked, in particular ‘Wolves’, which was “fixed” just today (16/3/16). “Fixed” is a term loosely used, Frank Ocean’s original part within the song is now its own forty second entity, and some of the transitions between verses are clunky and nowhere near as natural as the original cut. On the current concept that ‘Pablo’ is a “living breathing changing expression”, could this potentially be the advent of a new period for artists and the music industry, releasing an album and making changes as and when necessary with ease thanks to the technology? Probably not, but if anyone was going to kick start it, it would be West.

‘The Life of Pablo’ is a perfect summation of where West is in his career and life right now – it’s varied and certainly not consistent, but even at its lowest ebb there’s a talking point. He might talk a lot of shit but at least he’s good at what he does.