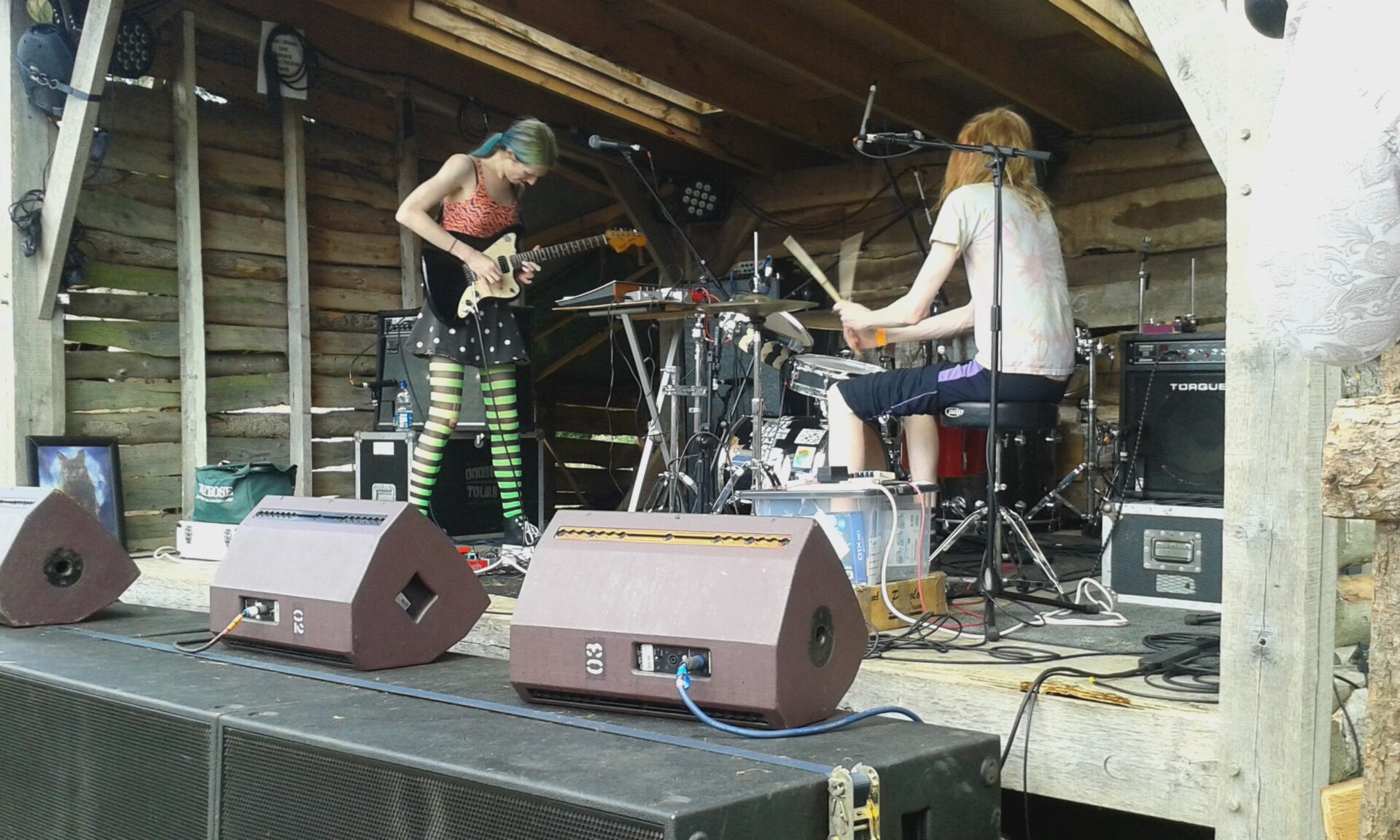 Supernormal, “the alternative’s alternative”, is possibly the UK’s most idiosyncratic festival, one that simply defies all categories. It is a place where there are no boundaries between artists and the audience, where you are just as likely to engage in live drawing or poetry writing as you are to witness some of the most exciting experimental music around. With the bill bringing together hardcore veterans, MDC, noise mongers Pigs, Pigs, Pigs, Pigs, Pigs, Pigs, Pigs, trailblazers The Ex, noise experimentalist JK Flesh and ex-Country Teaser frontman The Rebel, 2016 was always going to be a vintage year. And we were not to be disappointed.

Before Pigs, Pigs, Pigs, Pigs, Pigs, Pigs, Pigs hit the stage the audience got an unexpected delight of two women dressed as The Overlook Twins from The Shining. On top of their heads was a detailed wooden replica of The Overlook Hotel with lights shining through the windows.  But as soon as Pigs launched into their first song, ‘I am Demon?’,  the crowd went mental. By the end of the set, the multiple stage diving turned into a full-scale dancing stage invasion, with those not on the stage left screaming, clapping and battered into submission by the Pigs screaming aural brutality.

Finally, it was time for the mighty MDC all the way from San Francisco via Texas via Portland Oregan. This punk rock band have been active since the Reagan era 80s and have lost none of the anger. Their songs were fast and aggressive, yet the lyrics and impassioned vocals of lead singer Dave Dictor made the delivery far from throwaway. Not afraid to tackle uncomfortable subjects – from animal rights to gay rights, far-left politics and anti-capitalism – their  set was liberating. It was invigorating. Walking back to the tent with their intelligent rage ringing in our ears, it felt like Supernormal 2016 could take on the world.

With breakfast out of the way, it was time for Black Metal High Aerobics. Hundreds of people star jumping, lying down and peddling to Venom tracks and other black metal delights was a sight to behold.  A hilarious and life-affirming start to the day.

Guttersnipe are a drum and guitar duo from Leeds. The lead singer Gretchen’s yelping and howling vocals combined with the spasmodic drumming of her bandmate resulted in something beautifully noisy, yet grotesque in its delivery. It was a brutal cacophony of the highest order.

Afternoon belonged to the Brazier’s House and The Jug Choir: Ectoplasmic Variations. As the orchestra took their places behind beautifully crafted jugs, it was clear something special was about to happen.  The audience was instantly enthralled as soon as the blowing, humming and speaking-in-tongues into the jugs started. The second piece took in animal noises, running water, gurgling water sounds and an unearthly sound that seemed to take you to a different yet familiar plane. Extraordinary.

Bowie Vs Prince Karaoke threatened to overtake the whole of Saturday’s proceedings. With makeup provided by Surreal Skin Decorator Natalie Sharpe, this was always going to be an event to end all events.  We had great Bowie tunes rendered and Prince tunes murdered, but it was fun.

Multi-instrumentalist Heather Leigh started her show with a slow-burning choral singing, then changed into a distorted slide guitar noise that seemed to encapsulate her rock star voice. The Overlook Girls come wandering past again, this time with models of the Bates Motel on one head and Norman’s house on the other. Brilliant.

Unsurprisingly, The Ex were yet another coup for Supernomal 2016.  Another band that rarely play live but potentially made their mark on every single musician across the entire bill, The Ex can certainly claim their place amongst the most influential post punk guitar bands including Gang of Four, Joy Division, Wire and elements of Scratch Acid.   It’s all about their guitar sound, and the excited crowd were there to lap up all this rock’n’roll  history, to ingratiate themselves in the joy of The Ex.

Sophie Cooper and Julian Bradley started a fascinating collaboration that involved them developing the sounds and act totally separately by way of emailing files back and forth to each other. Minimalist electronic drone and guitar from Bradley and the exquisite (looped) voice of Cooper combined to create a beautiful aural spectacle that stunned the capacity audience.

Billed as a “black feminist punk band based in London”, Big Joanie‘s demeanour was chilled and fun. Their ramshackle performance (I mean that as a positive!) gave the impression that they had just formed five minutes before coming on stage! With a standing drummer whose performance bordered on tribal, they had a real Slits feel about them.

Christopher Josiffe on the tale of Gef-the-talking-Mongoose was next. The story of Gef talking to a young farm girl and her family back in the 50s as some manner of familiar poltergeist was made even more brilliant by Josiffe’s deadpan delivery and occasional vocal imitation of Gef.

Fast and furious, Casual Sect were very confrontational and noisy. Fronted by a ferocious girl who could scream like a banshee and pull awesome shapes, they had a very skronky/80s no-wave/Teenage Jesus and the Jerks vibe to them.

Set in the woods, then came The Neighbours are Bats, a very Supernormal experience.  Samples of UK’s bats hooked up to keyboards and Guitar Hero guitars provided the set up for the audience to “jam” with the bat sounds. Hilarious.

Along with Serafina Steer, Natalie Sharpe aka The Lone Taxidermist and Medea, created a visual spectacle taking in opera, theatrics, minimalist sounds and stage production.  In her vocal gymnastics and theatrics, Natalie’s performance could only be compared to Kate Bush.  Unbelievable.

The Lowest Form have their roots firmly planted in hardcore and have no pretensions at all. They just made an almighty fast racket.  Their frontman prowled the stage, sweating pints, goading the audience and band.

Appearing on stage in a white boiler suit, JK Flesh immediately hunched over his table of equipment and effects. The crowd grew hypnotised by his noisy repetitive beats. It wasn’t pretty. It wasn’t brash. It was harsh. At times it was excruciatingly loud, designed to upset and abuse the unruly Supernormal crowd.

Finally it was time for The Rebel. An incredibly prolific musician, artist and poet since 1989, The Rebel is most well-known as the front man of Scottish art-punk band the Country Teasers often cited as the precursors of Fat White Family.  Before he took to the stage, one of The Overlook Twins appeared with another painfully accurate depiction of a horror film building balanced on her head. This time it was The Amityville House in all its gory glory.

He started with a slow-burning spoken word piece over guitar noise. Then came a Dylanesque number that with the haunting lyrics “down in the vines, dark as a dungeon”. The songs just kept on coming…  The Rebel sang about “rotted coriander” followed by a demented version of The Animal’s ‘The House of the rising sun’. Seemingly naive sounds, they were, in fact, well-crafted and painfully pieced together songs replete with both guttural heartfelt vocals and near silences.  He was – hands down – THE voice of Supernormal.

Once again Supernormal 2016 had everything and offered some hidden surprises too. Lovely people. Great organisation. Beautiful site,. Provocative acts. Challenging ideas. In fact, it was just perfect. See you next year!