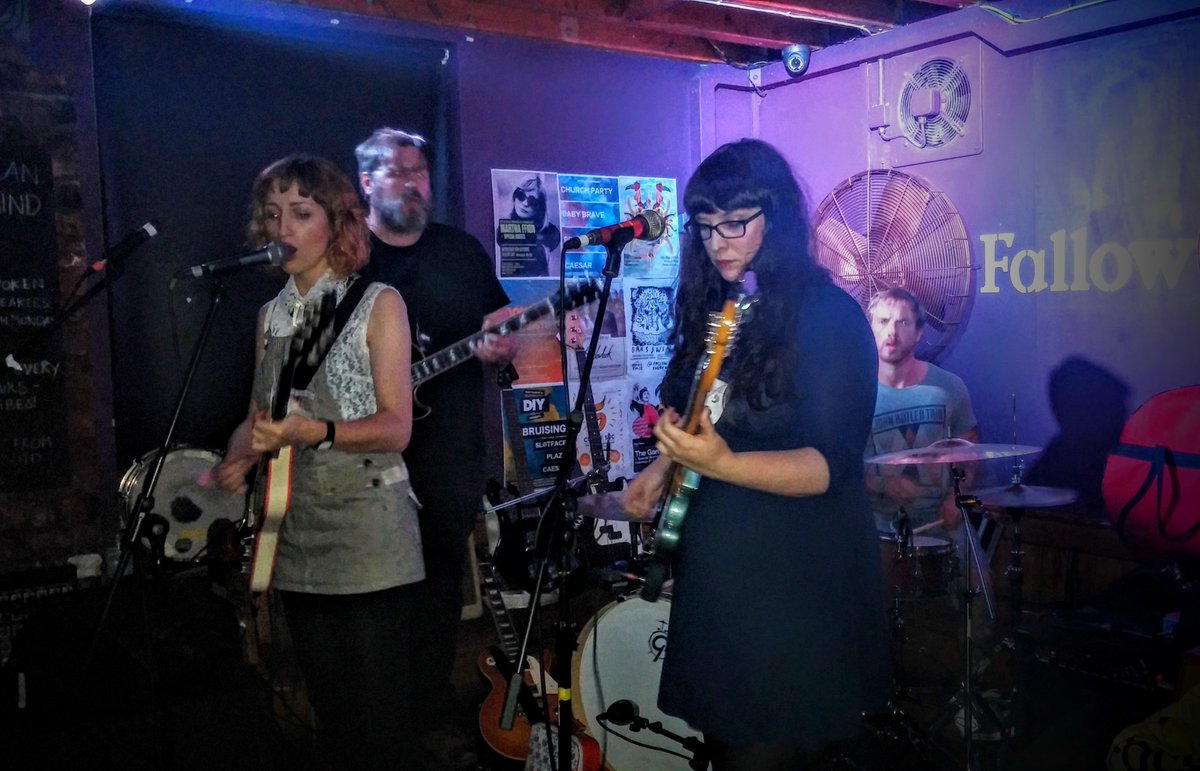 I’ve seen Baby Brave described as Chrissie Hynde of the Pretenders fronting My Bloody Valentine; I’ve also seen them compared to Elastica, which is true if you’re thinking about the non-singles tracks from their debut.  There’s a grubby, dirty Wedding Present-sounding rhythm in there, too.  And a pounding, danceable drum beat and some truly fantastic vocals and lyrics from Emmi Manteau, who fronts the band, both of which are far in excess of anything Justine Frischmann ever managed.

Tonight they open with the fabulous ‘Colours’ from the King Horse EP.  It’s pretty close to the gorgeous, shimmery record, but understandably a bit less pristine and a little grungier.  Partially because the sound in the room isn’t great, but some variance from the record can also be excused because they’re playing with their new drummer tonight.  Arms outstretched like Keith Moon, he plays his kit with a substantially greater amount of intelligence and taste.

More tracks from King Horse include ‘Jitters’ which is just about as close to twinkly dream-pop as the band get, sending shivers down one’s spine, especially by the time the beautiful ear-worm of a chorus kicks in.  This time, the sound  is effortlessly recreated on stage.  Guitarist Steve Nicholls seems to have a different guitar (and at least two unique pedals) for each track, but the trouble this might cause is definitely worth it given the results.

There are at least three fantastic shimmery pop singles from the second EP – ‘Alone in Tokyo’, ‘Shinichi Kudo’ and the stellar ‘Mimic My Shins’; all are delivered tonight with the right amount of shimmer, and perhaps a trifle more excitement and spontaneity than on record.  One key winner was hearing ‘Rock Paper Scissors’. Live, it’s revelatory and is in stark contrast to the recorded version on the album.  The guitar sound is satisfactorily filled out even though – for this song only – Emmi ceases to play the grubby, churning rhythm lines she’s been chopping out throughout, and treats us to a mime of the lyrics instead.  It’s a great, eye-catching act and maybe something worth replicating on other songs.

Other highlights were a new track, which suggests a further development of the band’s style, and greater use of backing vocalists, and second, the sublime ‘Wrists’ for the closer.  On record it’s an ethereal piece, suggesting all sorts of hazily recalled misdeeds, but live it just does not cease in its aggressive attack.  Easily the heaviest number in their set, and a great closer.