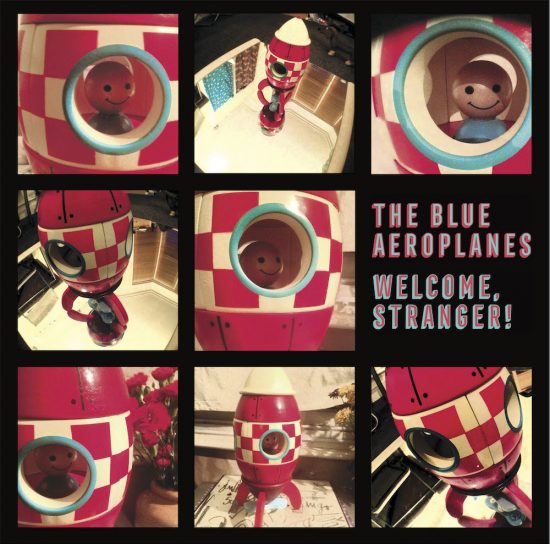 “The Blue Aeroplanes? Have they reformed then?”

You would be amazed how many times I have had to inform people, from the world outside God Is In The TV, that the band has never actually split up, and what’s more that they have released a whole 14 innovative albums since the first of those, Bop Art, was unleashed on the world way back in 1984. The fact that people think they’ve been away for a long time is sad enough. Perhaps even more tragic is the response from most of the other folk – “The Blue Aeroplanes? Who?“. Let’s face it, worldwide fame is looking decidedly unlikely these days.

It will be 36 years, in 2017, since Gerard Langley and his crew took to the stage under this moniker (previously having been the Art Objects), yet the band show precious little evidence of slowing down. Welcome, Stranger!, their first album in just over five years, begins with slowly ringing guitars like the clanging chimes of doom (hang on, where have I heard that before?), but soon evolves into the relentless energy of the brilliant ‘Looking For X’s On A Map‘. It’s an invigorating return and you can already hear what clearly inspired the likes of Art Brut, R.E.M. and perhaps even Lawrence, from Denim/Felt/Go-Kart Mozart fame/infamy.

Better still is ‘Sweet Like Chocolate‘, which follows, and is neither a copy of the Shanks & Bigfoot chart topper nor Tulisa‘s update of it. Instead, it blurs the boundaries musically between The Skids – its guitar motifs are eerily reminiscent of the late Stuart Adamson) and Focus, which is no mean feat in itself and… hang on a minute…it bloody well IS the Shanks & Bigfoot number – it just sounds absolutely nothing like it! The Aeroplanes have, of course, had a history of sparkling cover versions of all sorts of artists, further illuminating originals by Bob Dylan, Paul Simon and The Bad Seeds among others, and this is right up there with their best. Another highlight is the winsome jangle of ‘Dead Tree! Dead Tree!‘, which also features the kind of gospel-like backing vocals you would have found on ‘Young Americans‘ or ‘Walk On The Wild Side‘.

More cowbell? Look no further than the surreally painted picture of ‘Elvis Festival‘, which describes such an event eloquently and with trademark Langley humour: “You sing…badly / but no-one cares, you are…ELVIS! / They accept you, gladly“. It comes at you initially like a bastardised version of the Pixies classic ‘U-Mass‘, and develops into an utterly charming affair.

‘Skin‘ is something of a square peg in a round hole, as the band have long refused to follow any rule books other than their own, and they even tear THAT up on a regular basis. This one features iDestroy‘s Bec Jevons on lead vocals and proves that, should they ever wish to write a hit record for a major label pop artist like, say, Avril Lavigne, they’d clearly be more than capable.

Blue Aeroplanes are no strangers, and on this evidence, they are very, very welcome indeed. A resounding success.

Welcome Stranger is released on 6th January 2017 through Pledgemusic.