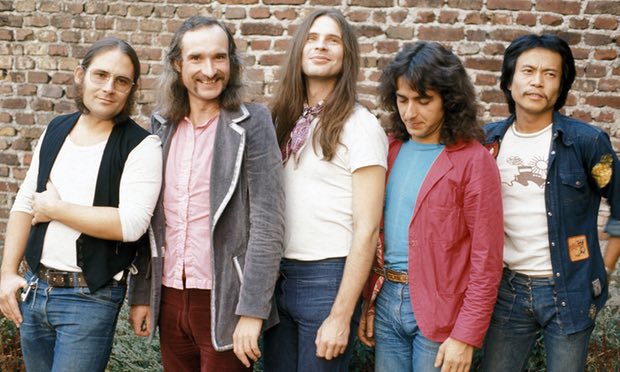 Yesterday it was announced that Jaki Liebezeit, the drummer and co-founder of pioneering German band Can, had passed away at the age of 78. A statement on Can’s official facebook page read: “It is with great sadness we have to announce that Jaki passed away this morning from sudden pneumonia. He fell asleep peacefully, surrounded by his loved ones. We will miss him hugely.” 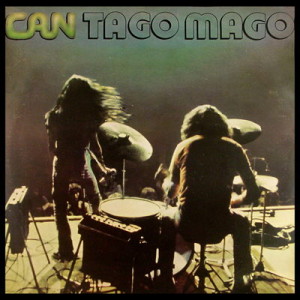 Cast adrift just 900 metres from the north-west coast of Ibiza is the unassuming island of Tagomago. This seemingly tranquil Mediterranean oasis, with its abundance of both fauna and flora; menagerie of bird life; and impressive otherworldly terrain inspired Can’s stoic adroit drummer/percussionist, Jaki Liebezeit, to enthral his bandmates with his tales of its magical beauty and eerie presence.  In particular, a certain supernatural luminescent rock formation caught his imagination: stirring something deep within Liebezeit.  Tagomago has a shrouded esoterical past: a one-time retreat, its believed, for the occultist trickster showman, Aleister Crowley; whose hokum dark arts and rites usually involved liberal spreading of sodomy and gonorrhoea. Can’s third studio album – though this is contestable as the previous ‘Soundtracks’ LP was really just a collected compilation of their TV and film work, up until 1971 – took a darker transcendental flight into the ether; picking up on those spooky vibes.  Founding member and alchamist composer Holgar Czukay described the vision for this album as: “…an attempt in achieving a mystery musical world of light to darkness and return”.

Further allusion’s were cast with the inclusion of the ectoplasmic, brown trouser inducing, ‘Aumgn’ track: partly a reference to the sacred end of pray exclamation uttered by Crowley in his Creed of Ecclesia Gnostica Catholica edict – though it’s really a derivative rendering of the original Sanskrit mantra “Aum”: more commonly known as “Om”.  Hardly the Satanic majesty’s of doom; or indeed willing disciples at the black sabbath: Can merely took a passing fancy; their spiritual worship enlightened by the allure of free-jazz, musique concrete, African polyrhythms, and proto-Marxist, and Situationist theory.

A couple of years previously they’d mixed the avant-garde and radical new-classicism of Stockhausen – both Czukay and Schmidt had studied under the behemoth Teutonic composer – with recent developments in western underground rock music. Their debut, ‘Monster Movie’, took its inspiration from the Jimi Hendrix Experience, Frank Zappa, Velvet Underground – who Schmidt had met in New York in the late 60s and hung out with – Love and The Doors; and featured the black American artist/beat poet, Malcolm Mooney’s faux-Arthur Lee/Hendrix vocal prose.  Now in 1971 they would, essentially, write the future blueprint of music, with an LP as much alive now as it was on its maiden voyage.

‘Tago Mago’ – now spilt into two separate words, for some reason – would be the bands first, wholly original sounding, masterstroke, and would also feature the strange incantations of the bewildered Japanese busker, (Kenji) Damo Suzuki – picked up, literally, by Czukay and Liebezeit when they came across him busking in Munich. Their previous erstwhile vocalist, Mooney, left for New York after suffering a traumatic episode of psychosis – after one drawn-out live performance, Mooney, like a stuck record, repeated the loony cantation of, “Upstairs, downstairs” for 6-hours; unable to break from the loop of his own making!

Key changes at this time involved Schmidt’s wife, Hildergard, take over the day to day management of the group. Can’s fortunes rapidly changed, as their newly appointed matriarch secured more money for gigs/tours, and pursued more lucrative soundtrack commissions: Can composed the theme tune for an Anglo/German detective series, based on the exploits of the fictional Paul Temple; a huge success, their signature tune, ‘Spoon’ sold over 50,000 copies and made the charts in Europe – not included on the original ‘Tago Mago’, it has since been added to CD versions and is featured on the 40th anniversary edition as a 30-minute extensive live jam.

Competent handling allowed Can to jam away on ideas for hours and days in their self-built, mythical studio – the Schloss Norvenich Castle, reincarnated as Inner Space. Czukay was helmsman, steering the sessions towards the most tenuous of goals: he’d sift through reams of recordings to edit together a thematic concomitant series of musical themes.  Essentially an album of two distinct halfs; the more bombastic, reverential blasts of cosmic psychedelia like ‘Paperhouse’, ‘Mushroom’, ‘Oh Yeah’, and the grandoise breakbeat opus ‘Halleluwah’, being balanced by the ghostly eastern ‘Augmen’, Mandarin imbued abstract ‘Peking O’, and antiquated organ come-down of ‘Bring Me Coffee Or Tea’.  Earmarked originally as a 5-track single volume, it would be Hildergaard’s foresight that persuaded the band to include the challenging unfinished, at that time, ‘Augmen‘ and ‘Peking O’; and so expanding the LP into the seminal double treat we’ve come to praise highly. 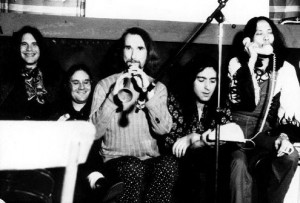 Eulogist pronunciations come thick and fast from numerable directions, when you mention ‘Tago Mago’: but why?

Can gave us the future; inventing almost single-handidly the art of remixing – a band that remixed their own material, by cutting and pasting musical passages together from related sessions – and can claim to have laid the foundations for all manner of dance music (techno, electro and trance), and help inspire Hip Hop.  However ‘Tago Mago’ is a rock album: no matter how you look at it.  To catalogue it as experimental, or, class as an anomaly, is to do it a dis-service, and to give the wrong impression of what this album really stands for.  Can re-invented rock music, broadening the scenes scope to accommodate ever-more influences: Can were unique; their mix of history, disciplines, and hunger for the new, gave them a certain edge – oh and before anyone starts drawing parallels with Pink Floyd, don’t. And whilst you’re at it, you can toss those Floyd remasters in the bin: I’d pick a Can album any day over bloody ‘Dark Side Of The Moon‘ trite.

By 1971 three of the five members were in their early 30s; bolstered by years of prodigal musicianship: the fresh-faced impish gifted guitarist, and Violinist, Michael Karoli, was their link to the current happenings – he had been a pupil of Czukay’s in the late 60s.  Though imbued with all his contemporaries, Karoli conjured up highly original licks and riffs from beyond the outer limits of space, the Nigerian delta, and atavistic Byzantine.  Each individual brought his own apodictic erudite genius to the aleatory mix, overlapping skills and sending the musical suites into four dimensions.  Irmin Schmidt with his interplanetary switchboard of keys and effects, would go into overdrive with his esoteric organ; laying down strange, and often, ethereal modulating soundscapes.  Jaki Liebezeit bounced around on his kick-drum pedal – pumping it as though he were blowing up a giant bouncy castle – and rattled off some of the funkiest drumbreaks in the known universe.  All the while, Holgar Czukay probed, teased and kept the momentum going no matter where his companions went, as Michael Karoli pined, wept and bent syphon diaphanous howls of reverence from his blessed guitar: plucking notes from the empyreal, at will. The kool-aid shamen, Damo Suzuki, sang in a style that would drift from uttering delicately laced, pursed lip, soliloquist statements, to reversed vacuum sucking weirdness, as he cut a swathe through the maestros bed of vistas.

Perhaps the best example of all this can be found on Can’s most referenced magnum opus, the 18-minute plus futurist jam, ‘Halleluwah’.  Confidently striding tall like a kaftan sporting Colossus of Rhodes; this epic breakbeat kicking, Teutonic funk and psych moon-stomp, showcases all the individual elements that go into completing a Can experience. A totem; testament; transmitter; this workout would touch and bless The Stone Roses – check ‘Fools Gold’ just for starters – The Happy Mondays, U.N.C.L.E and Primal Scream, alone.  The talisman marauding groove of ‘Halleluwah’ is hypnotic: 18-minutes fly by, as you’re sucked into the soulful glow of titanic Germanic funk. It also incorporates, to a point, all the different themes in evidence on this whole LP; from the chaotic dystopia of sound manipulation on ‘Aumgn’ , to the chanting ritualistic beat of ‘Oh Yeah’.

Let’s see: Julian Cope, Fuck Buttons, Moon Duo, John Lydon, Radiohead, The Fall, Sonic Youth, Horrors and Sterolab; a pretty serious list of talent you’d agree? Well they’ve all seen the light, and namechecked this album to the hilt – though just lifting it misses the point i.e Horrors!   Hell, some of these artists/groups have even had a go at remixing the great Can back catalouge – in 1997 Spoon asked a wealth of Can fans to remix key tracks for the, aptly entitled ‘Sacrilege’ LP.  A boxset DVD and full appraisal of the band followed.