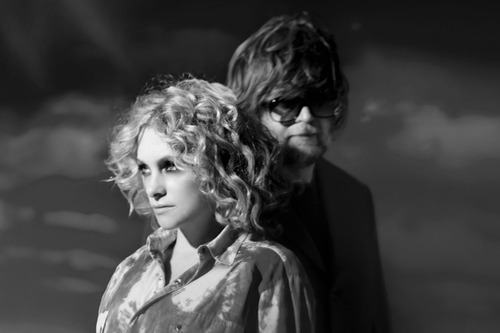 Last week Goldfrapp released their first single in three years, ‘Anymore’. Their new single takes them closer in spirit to the sleazy glam electro-pop of Black Cherry and Supernature with a renewed sense of attitude. They also revealed details of their seventh album, Silver Moon out on March 31st.  The announcement of a new Goldfrapp album is always welcome. Alison Goldfrapp and Will Gregory are into their 17th year of releasing music and they’re one of the few bands to put out consistently good records whilst refusing to be pigeonholed.

They started their career with the moody paranoia of Felt Mountain and then quickly changed direction with 2003’s masterpiece, Black Cherry. The mix of glam and electro pop they created quickly became an influential sound of some of the best mid-00s pop music including Kylie, Sugababes and Rachel Stevens. After their most successful record, 2005’s Supernature, they’ve taken stylistic detours from album to album. Their last release to date was the very underrated Tales Of Us in 2013.

Today, I’m picking 11 highlights that go back through their diverse career.

Reviews of Felt Mountain that labelled it a trip-hop album with comparisons to Portishead always seemed way off the mark. It has more in common with the dark and eerie atmospherics of Julee Cruise’ Floating Into The Night. Their strangely romantic debut single, ‘Lovely Head’ starts the album with a wailing theremin before turning into a jazz-tinged electro torch song. Alison’s vocals are disguised with unconventional sound effects as she reaches the highs of Billy Mackenzie and Minnie Riperton in the cinematic chorus. Musically, Will and Alison invoke a perfect warped soundtrack for this late night lullaby.

Since Goldfrapp appeared in 2000, many bad decisions have been made about who should record the latest James Bond themes. Every time the announcement comes, I cling on to the hope they’ll finally make the right call and pick Goldfrapp. ‘Sartorius’ has the perfect John Barry-esque strings and haunting melody that would make a classic Bond soundtrack. Goldfrapp performed ‘Sartorius’ in session and live on their Felt Mountain tour but it has sadly never had an official release. Maybe they’re still saving this beautiful song just in case they get that call?

Goldfrapp headed in a different direction on their second record, ‘Black Cherry’. They increased the electronics whilst adding disco and glam influences helping to create a flawless record. The third single, ‘Twist’ was overshadowed by previous singles, ‘Train’ and ‘Strict Machine’ (even being omitted from their singles collection) but it’s equally thrilling. Alison is full of Grace Jones style lust as she sings, “put your dirty angel face between my legs and knicker lace” over the dizzying synths and a deep infectious bassline. They had quickly mastered the perfect pop song with their updated take on 70s and 80s pop.

On Black Cherry Alison and Will successfully designed their own brand of art disco. They also put a new twist on the hazy soundscapes of Felt Mountain with an increased electronic edge. ‘Hairy Trees’ finds Alison on seductive form as she sensually sings, “touch my garden” in her own unique way. It’s an easy song to get lost in as the music is so elegant and dreamy. It’s one their warmest and most beautiful melodies.

Goldfrapp named their third album Supernature after Cerrone’s 70s disco masterpiece. They took the aesthetics of glam and disco that they’d introduced on Black Cherry and pushed them further. Lead single, ‘Ooh La La’ gave them their biggest hit, but it was far from the album’s best song. ‘Satin Chic’ is a highlight with its offbeat feel thanks to the slightly detuned honky tonk piano that bounces along with the melody. The Moroder styled synths and Alison’s playful vocals make this one of their most addictive and distinctive songs.

‘Number 1’ is one of Goldfrapp’s most straightforward pop songs. It’s laced with gliding synthesizers inspired by Gary Numan and OMD (there’s more than a hint of ‘She’s Leaving’ in the main synth line) as Alison gives one of her most tender vocals. There’s a calming reassurance as she sings, “I’ll be there to meet you”. Will doesn’t tour with the band so it’s easy to overlook his contribution to the group. ‘Number 1’ is an example of how their musical and lyrical ideas mesh together with ease. It gave them their second top 10 single in the winter of 2005.

With Supernature having sat nicely alongside some of the strongest pop albums of 2005, they took another left turn on the follow-up, Seventh Tree. They went against current pop trends and DFA inspired dance music of 2008 to make a pastoral record. Seventh Tree begins with the exquisite, ‘Clowns’. In a delicate voice over an acoustic guitar Alison asks, “what d’ya wanna look like Barbie for”. A stunning orchestral arrangement appears that gives the song such a gentle folk-inspired sound it could be on Nick Drake’s Bryter Layter.

‘A&E’, the first single from Seventh Tree remains Goldfrapp’s finest moment. Alison tackles the dark subject of ending up in hospital after taking an overdose waiting for her lover to arrive home. A natural blend of folk and electronica accompanies this heartbreaking story showing that they are a group who can find beauty in the darkest situations. It starts as mellow as ‘Clowns’ before some keyboards reminiscent of Erasure provide some comfort. Eventually, drums kick in for the climax as Alison pleads, “how did I get to accident, emergency? all I wanted was you to take me out high, and I was feeling lonely, feeling blue”. The vulnerability in her voice is devastating and compliments the passionate music crashing around her. ‘A&E’ is one of the most emotional and outstanding performances to ever make the top 10.

2010’s Head First found Goldfrapp taking their electronic template and streamlining their sound resulting in a polished 80s pop record. Alison has since said they weren’t happy with the record, saying it was rushed. It’s their weakest release, but there is still plenty to love here. The undoubted highlight is ‘Hunt’ which has a Hounds Of Love era Kate Bush feel to it. Over breathy backing vocals and swirling synths this lush mid-tempo ballad has some of Alison’s most evocative vocals as she promises, “tonight they hunt for you”.

Goldfrapp took their time to follow up Head First making sure they got to make a record they were satisfied with. Tales Of Us was a triumphant return to the stripped down sound of Seventh Tree. It’s one of the great autumnal records along with Beth Gibbons & Rustin Man’s Out Of Season and David Sylvian’s Secrets Of The Beehive. ‘Stranger’ starts as an intricate acoustic ballad before a breathtakingly gorgeous string arrangement comes in and takes over incorporating everything that makes their folkier side so bewitching. There’s a sense of mystery to ‘Stranger’ as it’s the only song on Tales Of Us that’s not named specifically after a person that makes it one of their most compelling songs.

‘Thea’ is the only departure from the understated acoustic nature of Tales Of Us. It features a slow pulsating beat and is the only song to recall their electronic past. It’s captivating from the offset with chilled arpeggiated synths that slowly build into the album’s most intense moment. It’s another alluring vocal from Alison as she paints a picture of the song’s character, “there’s wild in your eyes, there’s a light, oh Thea, there’s a feeling, It’s cruel and it’s dark in this town”. The music builds with into a widescreen electronic epic. Will again excels in making an atmospheric ambience that fills some of their best songs. ‘Thea’ is another remarkable entry into their excellent back catalogue.