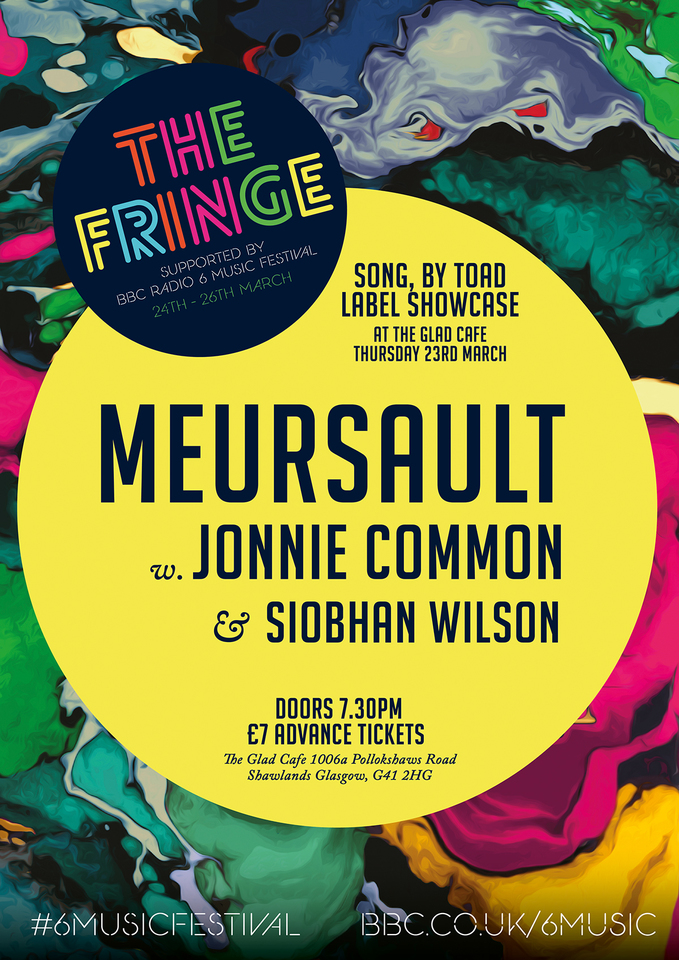 If ever a gig showcases the futility of aiming for the middle ground, this, the opening salvo in a city-wide sprawl of musical goings on, epitomises it. As part of the BBC 6 Music Festival, Meursault are initially truly guttural and primal onstage if you focus on the thunderous and excellent rhythm section. Bass and drums flatten all-comers but it’s hard to see beyond that. The songwriting and vocals from Neil Pennycook are fine enough, but no more than that. The jackhammer beats rattling around the tiny fringe venue are far and away the most diverting aspect.

Now, I’m fine with that. Groove works for me. I have them sized up, know what they’re about. It’s utterly shocking then when having asked the crowd to quieten down a bit, Pennycook dispenses with his mic, dispenses with all forms of electronic amplification and batters into an almighty roar for ‘Day Drinker’. Kicking the accordion player onto an old upright piano by the bar, the noise summoned up between just the two of them is something else. It’s quite staggering and a real, “wow, just wow“, moment. If anything it’s even more powerful than when the whole five-piece are going at it. The crammed-in crowd are pretty much slack-jawed to a man and woman. No one saw that one coming. Well, unless they’ve seen ’em before, right enough, but we won’t let that spoil the notion. Never jump to conclusions is the obvious but oft-ignored point.

And so we alternate through the set. Some full ensemble action with some fairly mental fiddle playing by Robyn Dawson – and it most certainly is a fiddle, not violin – to more stalking about the crowd blasting out songs without any electricity at all. And though the songs are quite universal growls and musings, Meursault are very identifiably Scottish. Like their Burgundian namesake, they have an unmistakable terroir. Not in an off-putting way, though, which surprises me. Too overt a sense of place can be a pain in the arse with a lot of bands.

‘I Will Kill Again’ is particularly strong and, in title at least, appeals to the inner sociopath. Reflects a certain darkness about the band as well. A pleasing darkness at that. You get the feeling that, despite the songs being tight and crafted, even in quieter moments, inside the head of the frontman is a tumultuous roar on permanent loop. At the extremes is where this band works.

Meursault are a band to be seen live. Far more impressive and with a deal more gusto than is apparent on wax. Mention must go to the support from two fellow Song, By Toad artists. Siobahn Wilson is perhaps not yet the finished article. Solo and with an angelic voice, the songs themselves drift a little but the vessel is there with a bit more development. Jonnie Common delivers a set of observational musings that flit along in a droll, wry and often flat out hilarious way. Witty fellow with witty songs.

Mention must also go to a flyer for the previous night’s entertainment at the vegan-friendly Glad Cafe. Hip hop, by the looks of things – featuring MC Almond Milk. If there’s a more site-specific name for a master of ceremonies, I’ve yet to see it. One hopes the next performance will be in support of Lo-Salt-N-Pepa. Rumours of a drop in by Figgy Smalls are yet to be confirmed.