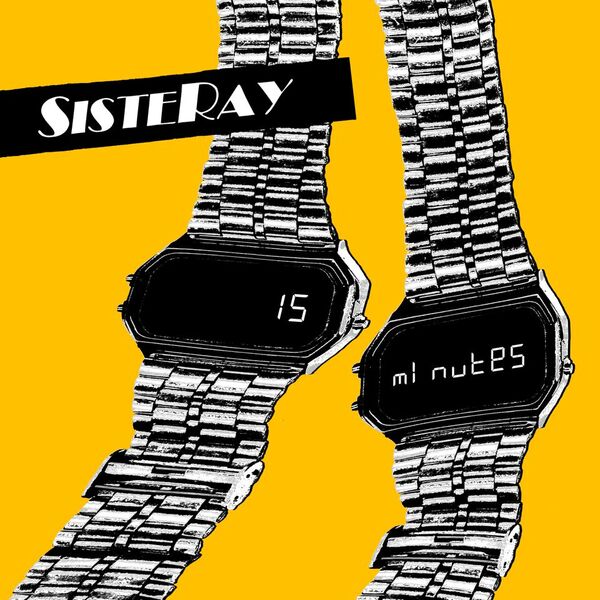 Five songs, exactly 15 minutes long, radgie and political as fuck. On this new EP release the Sisteray premise is simple. Fans of the band will already know ‘Fast Food‘, a blistering two-chord punk riff straight off the Kings Road that soon turns into a no-culture sideswipe at the hundred-mile-an-hour lifestyles of their high-rolling London peers, before collapsing in on itself in less than two minutes. Be afraid, the underclasses are coming and they are pissed off by now. The week after we handed in our Article 50 letter at school, Sisteray might not be here to save us single-handedly from decades of detention but they are definitely bringing the chicken nuggets and the banging tunes.

Amazingly, ‘Fast Food‘ is the weakest song on this incendiary battle-cry release, a clarion call, a red flag to the rich and two fingers to the stinking political elite. For those about to be disappointed by the new King Blues record, Sisteray are your new favourite band. 15 Minutes is early Oasis at their most snarling and ferocious (because first and foremost they were an antagonistic punk band) crossed with Arctic Monkeys’ signature pounding rhythms and the kind of vitriolic delivery in Niall’s vocals only a genuine ire can unleash. When the elongated Supersonic style guitar note introduces ‘Queen’s English‘ after that sample it’s like hearing 5 Minutes With… for the first time (comparisons will be made because of the title) and knowing it’s going to be amazing, so by the time you get to the end of a giddy 3 minutes and 8 seconds you already know it could be track of the year. We don’t care about the mixed metaphors in the lyrics or the train-wreck guitar solos that could play themselves and pepper this EP, we care about songs for air guitaring and music to riot to. Sisteray do too and they care about me and you, and about our country slipping into the abyss, “dead eyed and nihilistic/we’re fucked let’s be realistic”, they snarl as ‘Queen’s English‘ peaks and the wild abandon of the minor pentatonic scale possesses guitarist Dan once again. Utterly brilliant.

Next up, archly cynical and with no little irony, ‘Nostalgia Trip‘ is a rip-roaring piss-take, “Is there nothing new/just recycled grooves” Niall catechises as the bluesy bass groove carries the song to a giant chorus and Ramones like anthem. It’s heavy as hell, totally raw and just the right kind of under-produced. Further in there is barely a let up, ‘Famous For Nothing‘ breathlessly takes down the rich offspring filling our magazine racks via a series of clever but no less polemical lyrical tricks and then drops another breakneck guitar solo. Unchained and all delightfully uncensored. And closer, ‘White Knuckle Joyride‘, a sawdust-on-the-floor punk rocker about a girl who is “lightning in a box room”, and is a high-speed Bonnie and Clyde lyrical storyboard, showing that there is also more to the band’s song-writing bow than mere political agitation and that the possibility of a full album further down the line could be a wide-open space for the band.

Exciting, full of attitude, educated and anarchic; and because it’s the best new EP by an emerging band in years, with 15 Minutes Sisteray may hold the future of British guitar music in the palm of their hand just like Oasis and the Arctics before them. What they choose to do with it is entirely up to them.

15 Minutes is released on 14th April through Vallance Records.