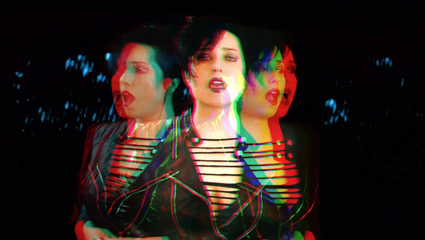 If Goldfrapp‘s recent return to stomping electronic glamour left you eager for more sultry moves on the dancefloor, then Los Angeles-based duo LUCKYandLOVE‘s new track ‘Digging in the Earth‘ may satisfy that hunger. A pulsing, reverb-drenched study in sci-fi glam strewn shadowy electronic pop. Then scattered with April’s artful delivery understated lyrics digging for meaning, like a abandoned astroid shooting across the cosmos shimmering with mystery, intrigue and a foreboding for its impending impact upon earth, there are echoes of everyone from the sultry playfulness of Grace Jones and the dark dystopic electro of OMD cloaked in a pristine futurism comparable with Ladytron. Lifted from their debut album Lucky + Love on June 30th. Watch the video above directed and edited by cinemaphotographer and animator Steve Barron.

“Musically, as much attention was paid sonically to the organic moog instruments as April’s voice, and we offered the analog synths space in the songs to breathe to their true dynamic potential,” says Luck.