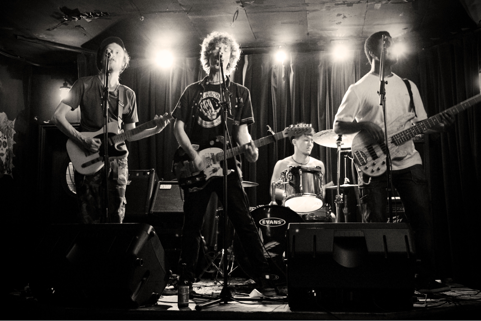 London four piece Smiley And The Underclass have given us the premiere of their new video for ‘Jump The Barrier’ off their new album Rebels Out There watch it above.

‘Jump The Barrier’ is armed with chopping riffs almost Specials aping percussion, vocals that spit somewhere between Jamie T and Joe Strummer and a shout out loud chorus they hope to deliver ‘a positive message to lift the spirits in these uncertain times.’  Shot by Japanese film makers Haruki Okuyama and Yukitaka Anemiya, the video takes its inspiration from the band’s debut album artwork by Italian surrealist Ronch.

Smiley & The Underclass don’t like to ‘beat people over the heads’ with the lyrics on the new album and made a conscious effort to not use any names, because “that ages everything” – Smiley explains “I remember listening to ‘Taxman’ by the Beatles and wondering who Mr. Wilson and Mr. Heath were. It’s the same with talking about David Cameron, Theresa May or even Trump. The themes are there and are pretty obvious for anyone who’s willing to listen: environmental apocalypse, inequality, the death of reason and the rise of bullshit. The weird thing was that we wrote the album before the Brexit vote and the US elections. We were singing about building walls and making truth long before these arseholes came and turned reality on its head.”

Catch Smiley And The Underclass on tour this summer and autumn.