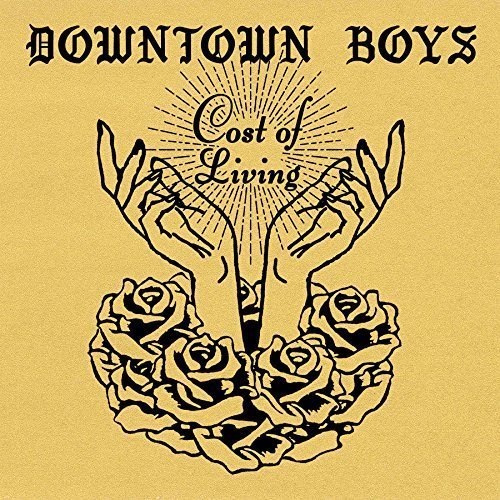 Downtown Boys are a 5-piece band from Rhode Island, USA on a mission to wake people up and ignite their fighting spirit.  Their music is colourful, angry and adopts an uncompromising take on the sorts of issues others are afraid to confront.  The band has never shied away from bold statements, naming their second album the deliberately provocative Full Communism.  Released through Don Giovanni Records, that record catapulted them into a new limelight.

Their follow up, Cost of Living, released through the long-acclaimed Sub Pop, is even more commanding and abrasive than their previous releases.  Although it has a less provocative title than its predecessor, it is a little less refined in sound.  Produced by the one and only Guy Picciotto (Fugazi, Rites of Spring), Cost of Living really captures the group’s sheer force, sincerity and demands for justice like no other band.

The album opens with lead single ‘A Wall’, of course referencing Donald Trump’s election promise to build a wall between the USA and Mexico.  To hear this song from a band with both Latinx and white members has a particular potency.  The mid-tempo, poppier sound of ‘A Wall’ contrasts well with the faster-paced abrasion of ‘I’m Enough (I Want More)’.  To say lead vocalist Victoria Ruiz‘s voice is on fire in this song would be an understatement.  It represents the kind of rage and pain of someone speaking from deep within.  ‘Somos Chulas’ and ‘Promissory Note’ has the band’s trademark catchy choruses and are particularly notable for Mary Regalado‘s basslines and Norlan Olivo‘s drumbeats holding the band together.

The long, tense intro to ‘Because You’ erupts into a wall of noise, decorated with guitarist Joey DeFrancesco‘s poppy hooks which help carry the song to a triumphant close.  There are more relaxed moments (well, relaxed for Downtown Boys) on ‘Violent Complicity’ and ‘It Can’t Wait’ where the music bops along while Ruiz sings earnestly about structural power amongst other topics.  ‘Heroes’ pays tribute to Aaron Swartz, co-founder of Demand Progress, an organisation that fights for Internet freedom.  Swartz killed himself just before being imprisoned for his fight for net neutrality, an issue that Downtown Boys have raised awareness for.  ‘Lips That Bite’ smoothly follows and is a infectious, dancey track.  The frenetic ‘Clara’ and calmer ‘Bulletproof (Outro)’ round off the album to a neat close.

Cost of Living is the kind of album that must be appreciated in its entirety for the songs to really make sense.  Listening to individuals tracks, as superb as they are, doesn’t necessarily pack the same punch as the songs lined up after one another.  That’s a testament to the impact of this record as a complete body of work.  No one can fault the band for their sheer sincerity.  They pour their heart and soul into what they do and back up their words with direct activism and organisation within their communities.  They truly embody a counter-force, to quote bell hooks, to the white supremacist capitalist cis-heteronormative patriarchy.  In these times we live in, their music will likely inspire people to do the same.

Cost of Living is released on 11th August.