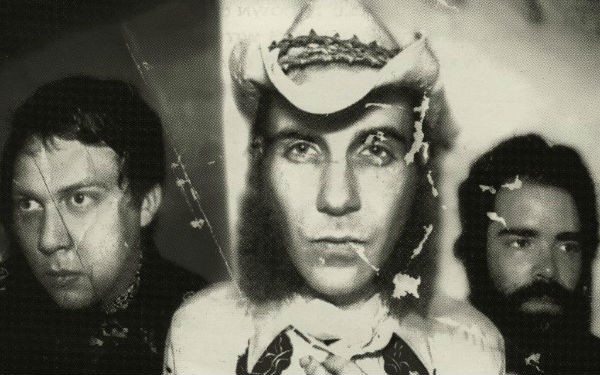 Meursault frontman Neil Pennycook is a busy man. Just six months after the release of the band’s fourth album (sort of a comeback, in that the act had been retired in 2014) I Will Kill Again, he’s already finished the next album in the last week. Given that that album is one of the highlights of 2017, expectations are already high. Not a man to rest for long, he is joined tonight by singer and violinist Robyn Dawson for an excellent set.

Part of the appeal of Meursault is the way Pennycook and cohorts don’t feel the need to play the game that other bands would. So instead of repeatedly pushing the last album and the new one, they play a handful of covers alongside with their own material. ‘This is my new thing. I play covers and say who wrote them at the end,’ deadpans Neil. This includes local and associated acts Viking Moses and Rob St. John (the latter now making series waves as part of Modern Studies), as well as a gorgeous version of Hank Williams’ ‘I Heard My Mother Praying For Me.’ For those who have yet to see Meursault live, it’s worth noting that there’s a fabulous counterpoint between the songs’ fragile beauty and Neil’s uplifting onstage banter. Despite the fact that the headliners may make music that at times it seems will melt you face (more about them later), Robyn and Neil hold the crowd rapt. And as an old adage has it, talent borrows, genius steals: hearing ‘I Will Kill Again’ live and hearing how it incorporates Vince Guaraldi’s ‘Christmas Time Is Here’ shows just what a clever steal it was.

Everyone knows about the statement about The Velvet Underground & Nico (google it, it’s become too much of a cliché to repeat, however true it is), but the legend around Lift To Experience has grown over the past few years. What is clear is this: the band were and are singer-guitarist Josh T. Pearson, bassist Josh ‘The Bear’ Browning and drummer Andy ‘The Boy’ Young. When they performed at SXSW in 2000, Robin Guthrie and Simon Raymonde of Bella Union were so impressed they signed the band to their label that very day. Legendary DJ John Peel was so impressed by them that they recorded three sessions for his programme in 2001 in the space of just five months (to put this in some kind of context, not even The Fall did that). That year they released their one and only album The Texas-Jerusalem Crossroads; a double album about the Second Coming of Jesus Christ that casts Texas as the Promised Land. What could have fallen flat on its face is a staggering piece of work – and in some ways feels like a cousin to Slint’s Spiderland. (Whether the band actually split or not after the release of The Texas-Jerusalem Crossroads or not depends on what you read.)

Having reformed for shows last year, the band have now remixed and re-released the album this year, with more shows following. By the time they walk onstage at Summerhall, anticipation has reached quite a level. Josh T. Pearson has shaved off his hellfire preacher beard and with his cowboy hat looks like a cool Texan dude, which with that accent, he most definitely is. And so it begins.

It’s not just the religious themes on the record: it must be said that watching Lift To Experience live -and even more so, seeing their effect on the crowd, is akin to some kind of religious experience. It’s a wonderful, wailing wall of sound that seems to run the gamut of human emotion, and quite staggering the think that this is just the work of three people. Seeing the crowd move almost in time, swaying to the sounds produced onstage, hypnotised, mesmerised, is really quite something.

Sure the album’s still fantastic. Live it really is taken to a whole new level. It isn’t everything but the kitchen sink (no hip-hop beats or sequencer bleeps, for example), but what is impressive is just how much is mixed in. On one level, there’s the shoegazer-indie-post-rock axis. But then add hints of americana, spirituals and gospel…there’s few that could even dream of trying to take this template. When Josh calls ‘The Ground So Soft’ a gospel song, it really is.

It’s not to say that the gig passes entirely smoothly. There are a few technical hitches – but the crowd, including yours truly, will forgive them anything. When Josh apologises, one audience member shouts ‘Never apologise!’ This isn’t blind devotion, but a sense that it’s worth it. For the encore, aware of where he is, Josh comes on to do a cover of the old Scottish folk song ‘Wild Mountain Thyme’ which works perfectly as an idea, and even if the delivery is slightly shambolic, it all feels part of the same glorious package.

Paying tribute to those caught up in the horrors in Barcelona, Josh tells us ‘God Bless You.’ He means it. We file out into the open air, ears ringing, wowed.