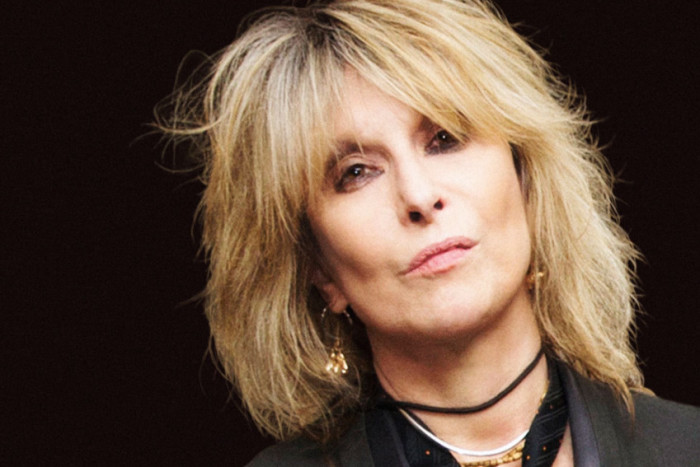 Chrissie Hynde is a force of nature.She has been fronting the The Pretenders since 1978, and tonight shows no signs of letting up or losing any of her edge.

Prowling the stage in a sparkly jacket, tour t-shirt and skinny jeans in the opening song, (the title track of last year’s Alone album), Hynde has fun with the very Lou Reed vocal: “What am I gonna do today?”, she asks the audience in surely the perfect opening line for a performance. It’s the best song to carry the Pretenders brand for some time and gets things moving nicely in a sold-out Symphony Hall.

Another newbie, ‘Gotta Wait’ follows hot on its heels and then the hits come out in force. Hynde tells the crowd that the Birmingham accent is her favourite and how she feels that it is under-represented in the media before tearing into a ferocious ‘Message Of Love’. ‘Talk Of The Town’ is another big-hitter that is dispensed with early on, Hynde managing to fit in a mild rebuke to those filming the show on their phones, (there was a firm request to leave phones in pockets at each entrance to the auditorium), into the songs ebullient chorus.

James Walbourne (who had earlier appeared alongside his wife Kami Thompson in tonight’s support act The Rails) did a sterling job on guitar, treating James Honeyman-Scott’s iconic guitar sounds with a real respect and lightness of touch (the original Pretenders guitarist died in 1982 aged just 25). ‘Private Life’ sounds immense, its insistent groove a real contrast with what has gone before.

‘Hymn To Her’ initially sees Hynde accompanied by just keyboards, showing off the range and strength of her voice as the other band members join the track one by one, leading to a devastating ending. A track from Stockholm, Hynde’s 2014 solo record, follows – this time Walbourne fills the shoes of Neil Young, who played on the original. (“James wasn’t available, so I had to get Neil Young,” quips Hynde). And a great job he does too, perfectly conjuring up Young’s weathered guitar textures.

And the hits keep on coming: ‘Back On The Chain Gang’, debut hit ‘Stop Your Sobbing’ and ‘Don’t Get Me Wrong’ in which Hynde suggests that the audience would be better off on their feet – they are to stay there for the rest of the evening.

Long-standing drummer Martin Chambers indulges in a good-natured but potentially unnecessary drum solo before ‘Middle Of The Road’ shows its mettle, Hynde’s guitar and a stupendous bass performance (from Nick Wilkinson) driving the track along and bringing the show to a close.

But there are still three encores to come: Honeyman-Scott and original bassist Pete Farndon (who tragically also died just one year after his band-mate) are honoured with a dedication before a touching run through of the impeccable early hit ‘Kid’, while there is a very welcome appearance of ‘I Go To Sleep’, perfectly sung and delicately played, one of many jewels in the Pretenders’ crown.

Hynde is In great humour throughout, joking with the crowd and looking like she is having the time of her life. And there is still time to throw in ‘Precious’ and arguably the band’s signature song ‘Brass In Pocket’, (first new Number One of the ’80s, you know), before the band disappear to a standing ovation.

On this form, Hynde and The Pretenders will be around for a while yet.