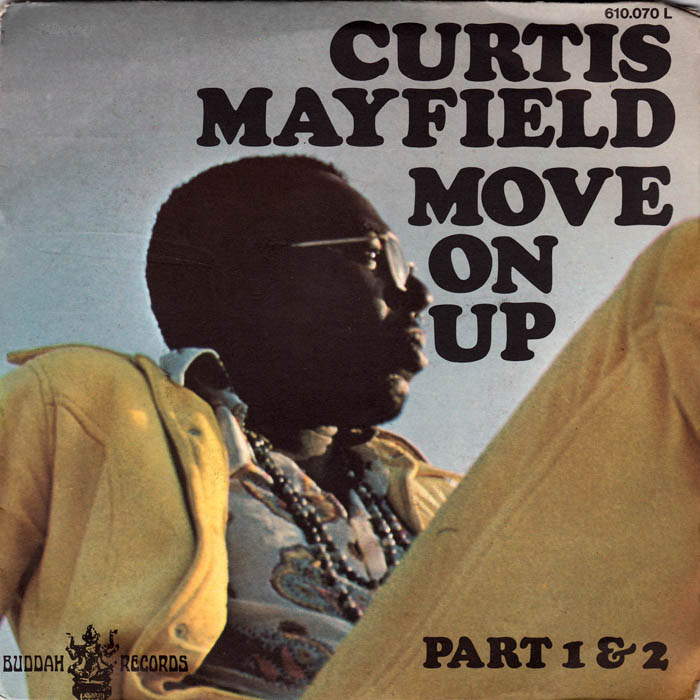 ‘Just move on up, to a greater day/With just a little faith/ If you put your mind to it you can surely do it’ intones Curtis Mayfield on the final chorus of his superlative signature tune ‘Move On Up’, offering a helping hand at the end of a dark tunnel.

‘Move on Up’ is a stone cold classic song, the near nine-minute album version first appeared on his classic 1970 debut solo album Curtis. But it punctured the general public’s consciousness back 1971 when the slimmed-down single version of the song spent 10 weeks in the top 50 of the UK Singles Chart.

Jumping off the start line on the back of an exultant fanfare of horns and given constant motion by hand-dappled drums that act as an anchor to this memorable song. Like the spinning wheels on a gleaming Chevy, the relentless, undeniable perpetual rhythm provided by ex-Rotary Connection drummer Donald Simmons and conga paddler Henry Gibson is threaded by dancing strings and Mayfield’s silky falsetto that’s meditative and comforting, less preacher more gentle fatherly philosopher offering guidance in the midst of a turbulent storm in an era dominated by racial tensions, social shifts and civil rights uprising. Mayfield was part of a growing group of black artists that stirred elements of soul, funk, jazz and blues into a stew with themes concerned with social consciousness of the issues of not just black struggle but those faced by the every day and women in American society.Marvin Gaye, Stevie Wonder and Isaac Hayes these artists connected, reflected and sought to document and speak to a tumultuous era of social change and emancipation.

‘Hush now child’ he offers at once calming and reassuring presence then expands upon this lyric that fixes its gaze firmly ‘ahead’ despite life’s ‘wet roads’ pitfalls and knockbacks along the way. Wonderfully dextrous baselines and Mayfield’s glistening guitar lines(that he trademarked with his group The Impressions) are the glue that holds the insistent percussion, warm dabbing keys and wind section together gliding into glorious uplifting key changes that circle back to the horn-led opening. Mayfield would perhaps never sing with such soaring hope again, darkness and was never far away in his work but ‘Move on Up’ isn’t just a great soul song it’s a great pop song because its message is timeless, keep on pushing, keep on going despite the odds this is a perennial mantra during the trials of the human condition. This coupled to its relentless looping earworm qualities makes this an enduring single something witnessed when the likes of Kanye West sampled it, its also brief glimpse at the wealth of Mayfield’s supreme, effortless, musical talent that we lost 18 years ago this week, that brimmed with sincerity and humanity for his fellow man.