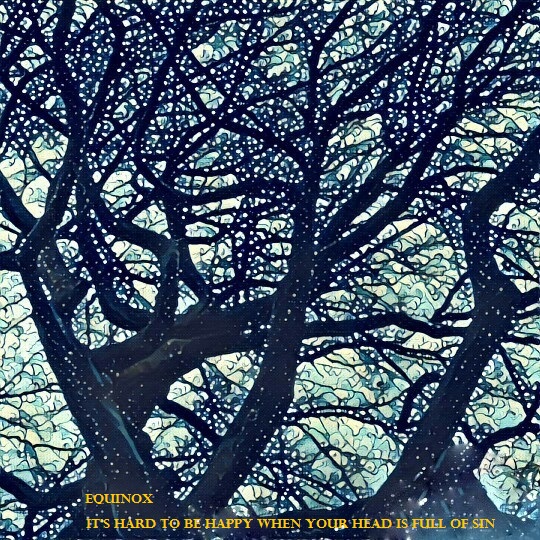 As a genre, spoken word can sometimes be subject to misconceptions (not least because of a certain Star Trek star’s forays into the style). On his debut album It’s Hard To Be Happy When Your Head Is Full Of Sin, poet and spoken word artist Equinox is challenging some of those preconceptions with often powerful and thought-provoking examinations on life and death.

To accompany his often lo-fi, almost laid-back speaking style, Equinox brings together fourteen artists to deliver their own arrangements. He enlists everyone from New England pastoral-punk artist Nat Lyon to Vince Clarke (who’s worked with the likes of Erasure and Depeche Mode) to independent acts such as Ceiling Demons and Superhand, resulting in a surprisingly varied collection. Rather than simply being filled with downbeat soundscapes that form a backdrop to Equinox’s words, the collection dabbles in everything from atmospheric and cinematic electronica to garage-rock. With ‘Don’t Die On Me’, there’s even a moment of disco-funk, complete with slap bass, while ‘Gone’ creates an oppressive atmosphere with machine-gun beats.

Even though the instrumentation can be attention-grabbing though, it’s still the words that pack the most punch. This is a hard-hitting collection, one that examines the grittier side of life, from suicide to depression and prostitution. Existential dread and mortality are running themes throughout the record, with Equinox also returning to themes of human connection, or the lack of it. He speaks of wanting “somebody who’s there when I’m needing a friend” and “is this the start of where we drift apart/ To loneliness now we descend”.

Sometimes he paints incredibly vivid pictures of a scene, honing in on details to transport the listener truly inside of the experience. ‘Goodnight Vienna’ epitomises this, as Equinox describes “an empty prescription bottle sticking to his claggy hand/ And half a dozen tablets scattered round like grains of sand.” Vince Clarke’s icy drones leave the words in stark relief, making the mental image conjured even more realistic.

While there are moments when Equinox drags the listener into his darkened world though, there are often times when It’s Hard To Be Happy feels patchy and occasionally incomplete. Sometimes the musical accompaniments are short, reflecting the concise nature of Equinox’s words, while at other times they’re extended out, leaving his short passages to feel oddly underdeveloped. Occasionally, such as on ‘Humankind’, his words can even feel obscured by an overly noisy mix.

At other times, it’s the music itself that comes across as half-finished. This comes across the most on ‘Belief’ with Will Harris. Here, the male chorus begins to swell at what could be assumed was the climax, but instead of reaching an emotional apex, the track is left to conclude unceremoniously, fading out suddenly and finishing with a whimper where there should have been a roar.

While Equinox attempts to build atmosphere and intensity, these moments dampen some of the power of his vision. It’s Hard To Be Happy turns out to be something of an uneven first collection, but there are enough striking lyrics to help break down some of those spoken word misconceptions.