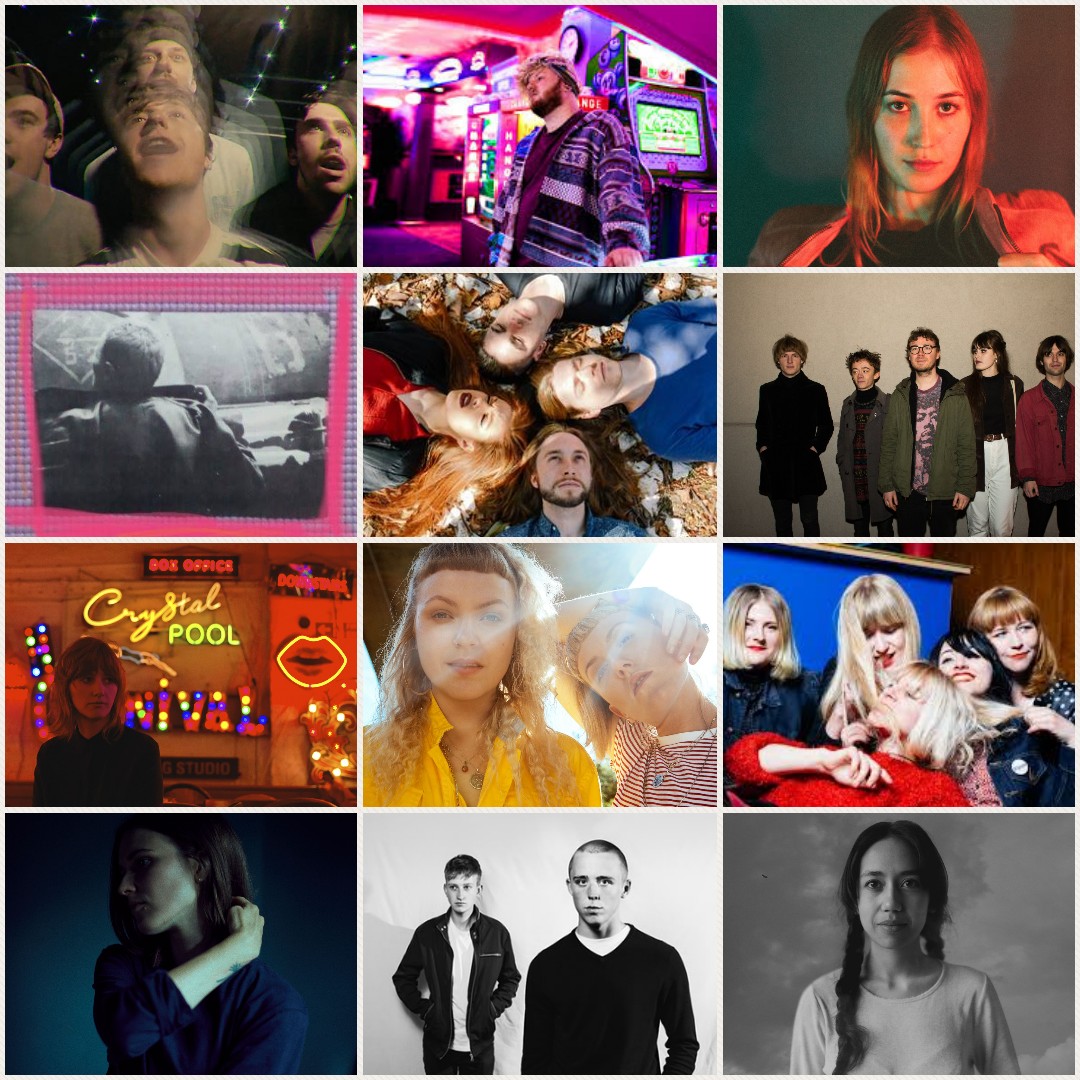 Welcome to my annual Tip Tape a playlist of some of my favourite new musical acts that I am highlighting for the next 12 months. I considered a few artists who have excellent debuts slated for this year(The Orielles, Seazoo, Stef Chura, Dream Wife), but decided to focus on much newer artists with an emerging reputation, as it’s more applicable here. Some are tipped on the basis of one song others on the basis of a series of singles; all of them are acts I am looking out for over the coming year.

Boy Azooga – Face Behind Her Cigarette

Boy Azooga is the vehicle for Cardiff’s Davey Newington (previously drummer with Charlotte Church and Houdini Dax) multifarious musical mission, the infectious psych-pop rhythms of ‘Face Behind Her Cigarette’, his ace debut single for Heavenly Recordings.  With hints of Hot Butter’s 1972 synth-pop smash Popcorn and the playful percussive psych of Django Django, it draws inspiration from the late Nigerian funk overlord William Onyeabor. It’s an earworm that’s guaranteed to get you dancing. With a debut EP released in 2017 that showed different sides of Boy Azooga with insidious Kurt Vile-like tunes rubbing alongside their more floor-filling numbers, and with more releases hopefully coming out on Heavenly records, Boy Azooga are ones to keep a keen ear out for in 2018.

Gathered from all four corners of the globe, London based girl gang Yassassin took their name from a David Bowie song as a way of celebrating his legacy and they do this with glee. Delivering off-kilter pop with lashings of personality releasing an EP Vitamin Y in the autumn of last year and developing a reputation for riotous live shows and the songwriting to back it up. From the serrated edges and bass bounds of ‘Pretty Face’ that dance across your ears and explode into singalong stomps could literally be a punky yet melodic anthem for the #metoo campaign and a large two fingers salute to misogyny. To the sinister ‘Cherry Pie’ with its sawing guitars, twitchy post-punk rhythms, with vocals that lead you up the garden path and pile on top of you yelping in your ears with illusions to sexual obsession. The ghosts of The Slits and Lush swirl around elements of these tracks but never intrude. Spiky, tuneful and bursting with attitude Yassassin are frankly a bloody brilliant proposition!

Hatchie is the world of Harriette Pilbeam from Brisbane Australia, rather than looking outwards for inspiration Pilbeam “instead turns her gaze inwards, making a soundtrack out of her daydreams, setting her emotional life to song.” Her second single ‘Sure’, the follow up to her debut release ‘Try‘, has captured our hearts, a gorgeous pop earworm carved out of gleaming glass, this gorgeously wistful melody cascading across a backdrop of shimmering guitars and shivering synths is a diamond cut of pop that’s had us swooning throughout the day! “So you wanna do it over? But is it really ever over?” sings Pilbeam on an impossibly catchy see-sawing chorus melody that has echoes of the Sundays or M83, her effortless vocal performance captures the bittersweet essence of what its like to fall in and out of love, to want to give it another try despite it all: “I wrote “Sure” about people I know falling in and out of the same relationship issues as we grew out of our teens into early adulthood” she explains. “When I initially wrote it, it was about a couple that decided to give it “one more shot” over and over again because they couldn’t bear to be apart. When I think about all the lyrics now I realise that it could be interpreted in a number of different ways.” Hatchie plays SXSW and The Great Escape in 2018, we’re desperately hoping for a debut album!

IDER are the vocal, instrumental talents of Megan Markwick and Lily Somerville. 2017 started with the release of their excellent debut EP ‘ GMLAA’ featuring amongst a clutch of prodigious tracks the impossibly hooky sinuous R&B snap of electro-pop cut ‘Face On’. They followed it up with the entwined vocals and delicate sound of ‘Learn To Let Go’ on their new label home Glassnote Records (Chvrches, Phoenix, and more), while their most recent song the blossoming affecting twin melodies, weaving pianos and intricate percussion of ‘Body Love’ wraps itself around our cold hearts and won’t let go. With a slew festivals across Europe l and two immediately sold-out shows at East London’s Archspace, followed by a U.K./EU tour of packed-out venues with XL twin pairing Ibeyi. These past twelve months have confirmed IDER, this exciting shape-shifting pop duo as ones you have to keep your ears open for.

As we face the January cold let me introduce you to emerging Cardiff group Perfect Body, Their apt debut ‘Getting Cold’ possess clattering percussion, that’s drenched in wave upon wave of clanging distortion peddle guitars that sheet-like spitting rain on a grey day, while ghostly female vocals are whistling around your head and enveloping your heart. The obvious touch points of Slowdive are present and correct, but there’s a darker more sinuous, unsettling gloomy majesty at work with Perfect Body, one that suggests cavernous wells of potential. Perfect Body have also released a second track ‘Round The Bend’ is more male-led vocally its wonky rhythms and fuzz box sounds are charming as they are intriguing, catching you off guard at every turn. As part of the Forte project an organisation that helps fund emerging acts in South Wales, you can be sure to hear more from Perfect Body in the next twelve months.

Everything by Electricity- The Last Day of the Summer

Everything by Electricity released their debut single ‘Last Day Of The Sun’ on 22 November. We’re absolutely smitten with this shimmeringly gorgeous synth-pop cut, the effortlessly sighing vocals of singer and multi-instrumentalist Yulia Bizyukova are draped with a longing and regret. It’s redolent of mid-period New Order and the bittersweet majesty of ’80s 4AD groups, immaculately constructed with an ambition and widescreen brilliance all of their own, the atmospheric production and spiralling synth patterns gives you the feeling of staring into the middle distance at the blinking lights of the city’s winter sky and wondering what life is all about. They’ve recently supported Marnie of Ladytron in the Oslo in London, and have plans for further singles and a debut album in 2018, we can barely wait!

Joel Avaient – ‘Someone I Don’t Know’

Joel Avaient‘s ‘Someone I Don’t Know’, is his sprightly debut track mixing the refreshing pop melodies that snap with the rhythm of a Michael Jackson fan yet aware of the soul-baring queen Amy Winehouse, while the playful productional gear changes constantly keep you on your toes, and are the work of someone with a few Timbaland produced records. Created alongside producer Dan Humphries of StudioToy in Cardiff, an ingeniously moreish earworm and a tantalising introduction to an exciting talent. We’ve also seen some impressive live videos from SWN festival at the end of last year that suggest Joel has quite a wealth of talent up his to sleeve to share in the coming months.

Haley Heynderickx‘s debut single ‘Oom Sha La La’ was an offbeat delight it is.Her dulcet tones, part spoken, part sung tumble forth like words on the page with a spellbinding, intricate eye for detail turning doubt spawned by mundane moments in time into positive affirmations.  This brilliantly tuneful shuffling sway, is laced with toe-tapping Shalala backings, sharing a rickety lo-fi undertone with Kimbya Dawson and a doe-eyed raw intimacy with Angel Olsen, or the introspective songwriting of early Emmy the Great, but it’s Heynderickx’s voice that scorches this tune on your brain, like a wax stamp on a very important letter. Her vocals underscored by an existential angst that’s released by songwriting as therapy so much so that she squeezes the life out of her larynx by the end. The chorus lines dance like precious moments of humour, joy and tunefulness amongst the detritus of a stream of consciousness, like the moment you laugh at how bad you feel briefly managing to release the tension for a while.

Mysterious Irish producer Sal Dulu released his second track ‘Antasma’ at the tail end of last year and it’s a delightful gem that’s already been picked up on by various newspapers. Lacing laid-back beats with a patchwork of ingenious samples, jazzy washes and playful instrumentation there are hints of The Avalanches, Groove Armada and elements of hip-hop, to craft an intoxicating and refreshing atmosphere that transport you to abandoned Island shores. Sal Dulu promises more singles this year, hus nascent work is as adventurous as is it is visionary and intrigues as to what he will come up with this year.

Pembrokeshire-based duo Names released two singles this past year ‘Limb by Limb’ was the follow up single to ‘Backs Turned’, a masterclass in sparse cinematic instrumentals that decorate vast wintery landscapes and entwined vocals that detail existential doubt. ‘Limb By Limb’ is “largely inspired by the ignorance of issues within a relationship which slowly bring about its demise. Also the effect of a background anxiety on life and ability to socialise.”  With hints of the subtle textures of Talk Talk and the meditative qualities of mid-period Radiohead, Names’s brand of bilingual alt-pop has the hallmarks of some prodigious levels of promising songwriting.

At once intoxicating and exciting London four-piece Mellow Gang made a big impression on me in 2017 with their sumptuous debut single ‘Lagoon (Solina)’ and followed it up with the excellent debut EP, ‘Play’ which threw more light on the evocative corners of their soulful, dreamy sound that is redolent of the psych sounds of Tame Impala and the heavy darkness of early Howling Bells.

Sumptuous minimal, pulsing pop from Polly Mackey who has been involved in a few musical projects down the years. Her new guise may be her best yet going by the vast scope of her debut EP, lead track ‘Bending Back’ is anything to go by mysterious and beguiling, echoing the works of Everything But The Girl only placed in a setting of contemporary production. Mackey’s gorgeously wistful vocals detailing the push and pull of the centre of control in a relationship. Art School Girlfriend possesses a songwriting talent with the ability to stop you dead in your tracks.