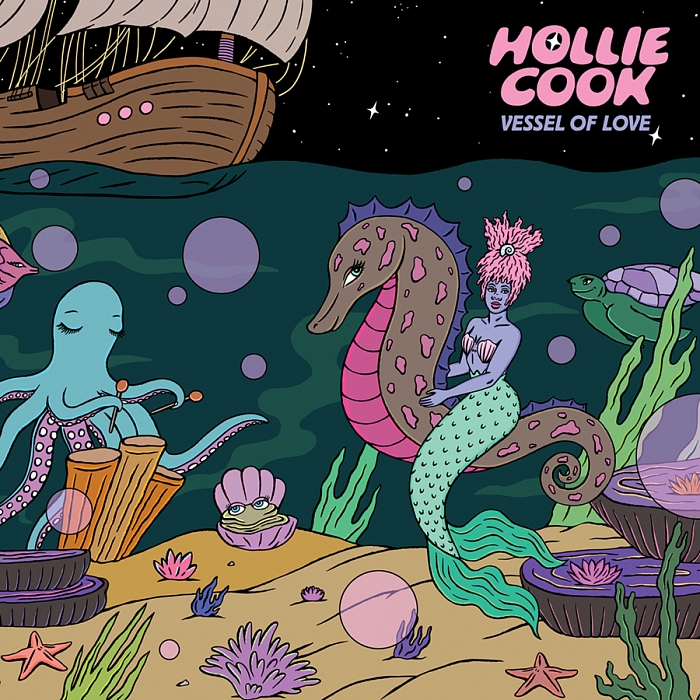 Hollie Cook is one of those figures that will be forever associated with a very specific place in pop music History; as the woman at the front of the last lineup of legendary group The Slits, Cook became part of a lineage of musicians that inspired generations of artists striving to convey a message of liberation. The sonic regions explored by the band, bridging racial and cultural gaps, contributed to a fresh, more cosmopolitan understanding of the music of young Britain, and she’s a heir to this tradition. What she achieved in that particular era is just a prologue for Cook, whose solo trajectory has built upon these concepts, but now at the service of a different master: Songs about Love. A different cry for freedom.

She makes her distinction as a pop singer very clear on Vessel of Love, her third studio album, which is itself kind of a manifesto. Cook has defined her music as “Tropical pop” and this statement permeates the record’s entire musical sense, from the song structures and arrangement styles, to the warm, breezy production space. Of course, we can safely assume that this work is also sort of a departure for Cook; never before had she been so concerned with exploring the current pop trends, embracing abstract electronics and technicolor synths on top of pockets of Prince Fatty Horseman drum samples. The end result, naturally, is a dreamier, smokier effort, with Martin “Youth” Glover’s production anchoring Cook’s cosmic crooning, which always takes center stage.

Like in previous LP Twice, reggae is the creative starting point of Vessel of Love. However, while the former is rooted in the cavernous sounds of dub, and more in line with the 70’s-80’s tradition of Caribbean diaspora music, the latter encompasses R&B, girl-group soul and even psychedelic elements into her brand of Lovers Rock. This new approach may seem disjointed at first, but its focus on textures is a better match for Hollie’s lyrics. There’s a special sense of melancholy throughout the album; most of these songs were created in times of struggle, some of them even during bouts of depression and anxiety, which is especially evident in their delivery. Hook is a sensual, confident singer ─ comparisons to Sade have been common all throughout her career ─, but in this record, she comes off more urgent, more in touch with these complex emotions, and even when the hazy instrumentals suggest a sense of escapism, Hook’s voice brings the messages back to the ground.

Vessel of Love is an album for lovers, for those who come back from hell, for the survivors, for new beginnings. This record is both about the sensation of falling in love and about the relief of moving out of the toxic past, and if we are to believe that old saying that all reggae is a celebration, then it is safe to say that Hollie Cook’s new material celebrates the amazing complexities of the heart, and our great capacity for transformation.

Vessel Of Love is released on January 26th through Merge Records.