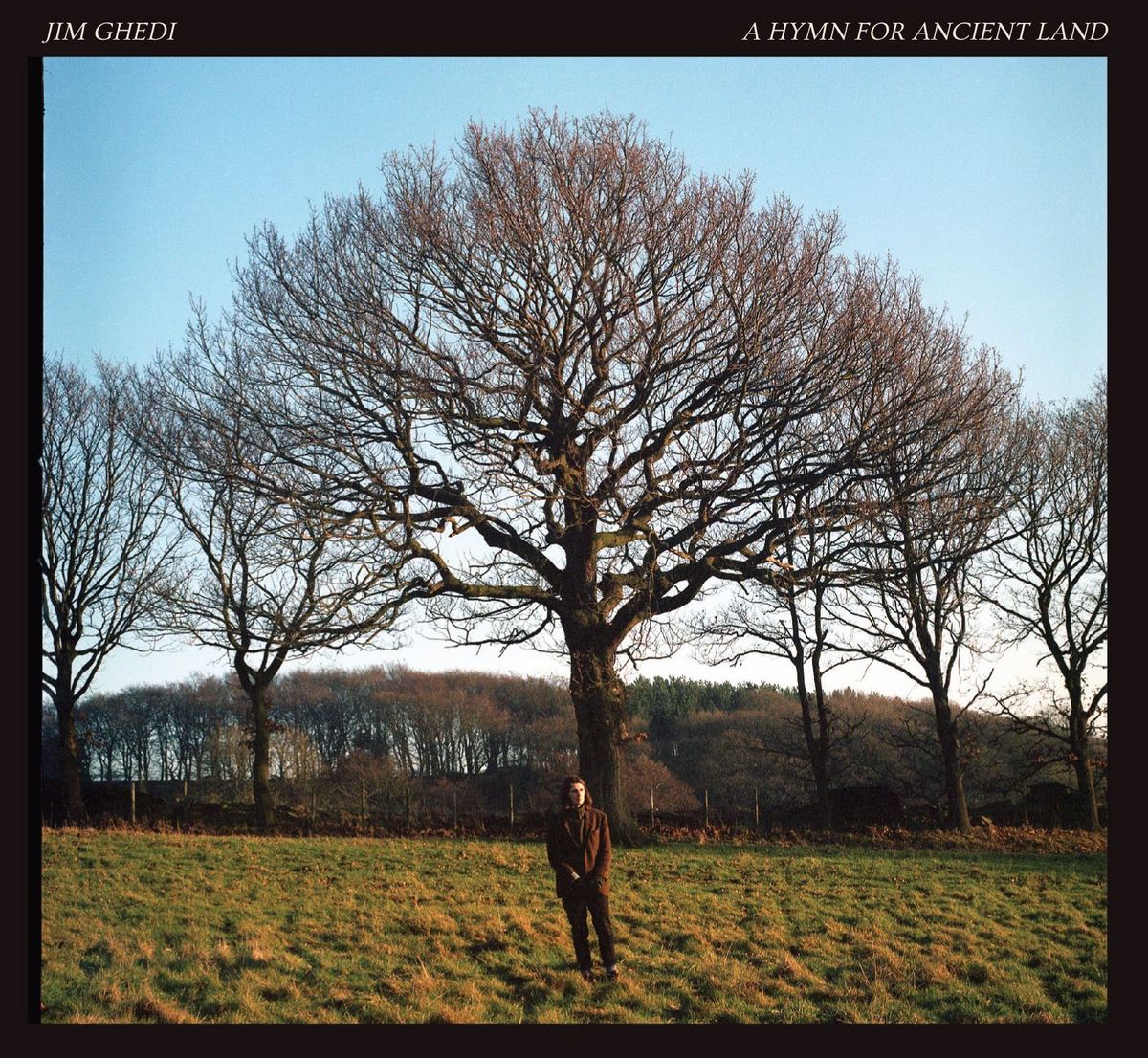 There are records that sing of the land, and those that wear traces of its soil beneath its author’s fingertips. Nature may be elegant, but it is rarely clean. It is a coarse thing, roughly marked by men and women who have known the abrasion of bark and nettle, skinned knees and chapped lips, seasons marked by sloe berries and the quick snap of frost. “In north-east Derbyshire,” Jim Ghedi begins at last, “I have worked my years.” Five songs in, they’re the first words spoken on A Hymn for Ancient Land, and the preceding tracks immediately feel less like instrumentals and more like their own wordless storytelling, the landscape rendered in strings and bows before anything as brittle as language is permitted to enter the fray.

There’s a difference between an artist such as Jim Ghedi – a fond memory of my own time spent living in Sheffield and Derbyshire – and those who employ the signifiers of country living to lend their own work an air of rugged authenticity. Everything here arrives at its own pace, each track a living thing breathing in and out with lungs at rest and heart at peace. The musicianship is lustrous throughout: Sheffield’s multi-talented Neal Heppleston provides artful double bass, and there’s a sense that Ghedi’s time spent on tour with labelmates Nadia Reid and Julie Byrne, both of whom had significant critical breakthroughs with stripped-back folk records in 2017, was a tonic for all involved. Silences here are vast and comfortable, meted out in their own measure like music, a succession of tiny graces that recalls the opening indentations of Talk Talk’s masterful Spirit of Eden. You just can’t fake that ear for transcribing nature’s own cascading rhythm in song. It’s a gift.

A more modern calling card would perhaps be British Sea Power’s Man of Aran soundtrack. Like that album, A Hymn for Ancient Land documents a nostalgia for simpler times in a way that remains fond without lapsing into saccharine territory. ‘Banks of Mulroy Bay’ is an old standard, evocative of Ghedi’s youth spent surrounded by song in a tight-knit Irish community, though it slots in immaculately among the original pieces, all of which share stories attached to the beautiful place names carried in their titles: Moss Valley, Cwm Elan, Bramley Moor, Fortingall Yew. That most of these pieces are wordless allows the pick and sweep of their strings to guide the narrative; ‘Cwm Elan’ is a particularly gorgeous thing, a Nick Drake-inspired music box, its pirouetting ballerina swapped out for the rushing of clouds, the gasp of the sea as it leaves the shore behind.

The album works perfectly well without beginning or end, but instead played for an hour or more on continual loop, wherein any such distinguishing parameters fall by the wayside. Nonetheless, ‘Sloade Lane’ proves a fitting denouement, particularly as Ghedi’s annotations indicate (by accident or design) a cyclical return to the lush woodlands of opener ‘Home for Moss Valley’: he describes the lane as being “once on the old packhorse routes into Sheffield from the many manufactories in the Moss Valley.” It was the home of village blacksmith at one point, forging new material uses from his seemingly immalleable fragments. Like songwriting, it’s a craft that will only carry the work of mavericks and charlatans for so long. Jim Ghedi has nigh-on mastered his trade, and like any craftsman at the top of their game, his work will reveal its worth over time, by dint of both longevity and class.

A Hymn For Ancient Land is out now on Basin Rock.