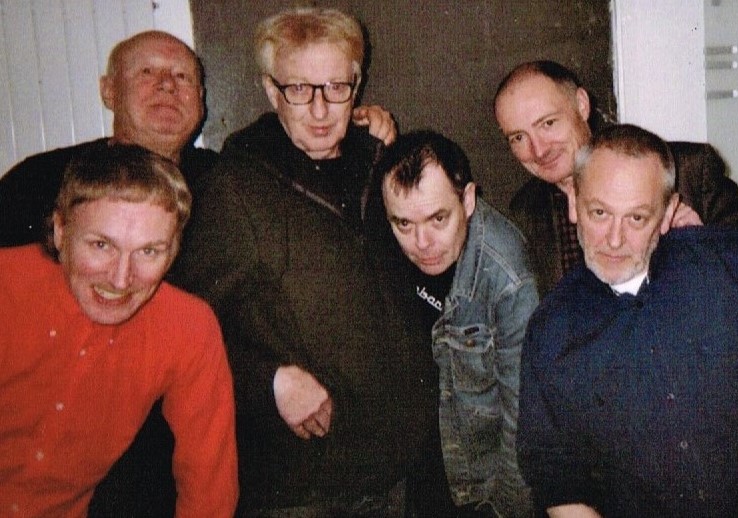 Once in a blue moon, a very special gathering of musicians takes place to record for Specialized, a project in aid of the Teenage Cancer Trust. Each album under the project features numerous acts all recording cover versions by one artist – in the past The Clash, Jam and Beatles have all got this unique treatment. This time, it’s Jimmy Cliff.

Micko Westmoreland, together with artist Harry Pye, has put together an unrivalled line up of talent from successive generations of deviant pop talent to form The Spammed, a supergroup (tongue firmly in cheek as they say it through) featuring original Damned drummer Rat Scabies, The Specials’ bassist Horace Panter, Monty Python writer and Rutles mainman Neil Innes on keys and comic actor Kevin Eldon, no less. This time, they also tempted PJ Harvey/Gallon Drunk brassmeister Terry Edwards along too.

Here, Micko shares his studio diary of the day’s proceedings, along with a few exclusive snaps and candid video clips… 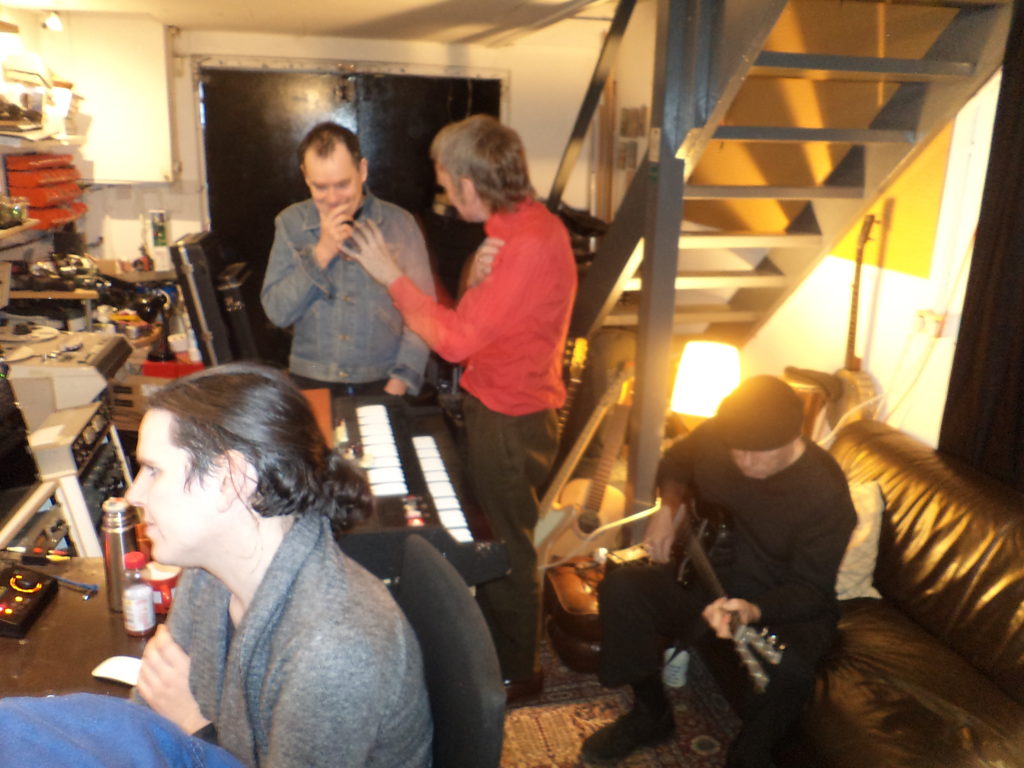 10am
This was the planned start time, but not surprisingly no-one really starts turning up until 10:30am. Hermitage Works Studio has nobly offered the cheapest rate in town for us to do our thing for the Teenage Cancer Trust project Specialized. I arrive to meet Spammed collaborator artist Harry Pye – as organisers, Harry and I are always the first to arrive and invariably the last to leave.

11am
The news is that our drummer Rat Scabies is lost somewhere near Manor Hose tube station. Harry agrees to track down the man that no-one with any taste in good music could miss. I’m left with producer and engineer Margo Broom and assistant Nathan Ridley to talk about mic-ing up the drums and Goat Girl, because I originally found out about the studio through a tip-off from their bassist Naima. Amusingly, our drum discussion comes to a crashing halt as Rat enters, grins and says ‘I want ‘em set up like this’! Discussion over. 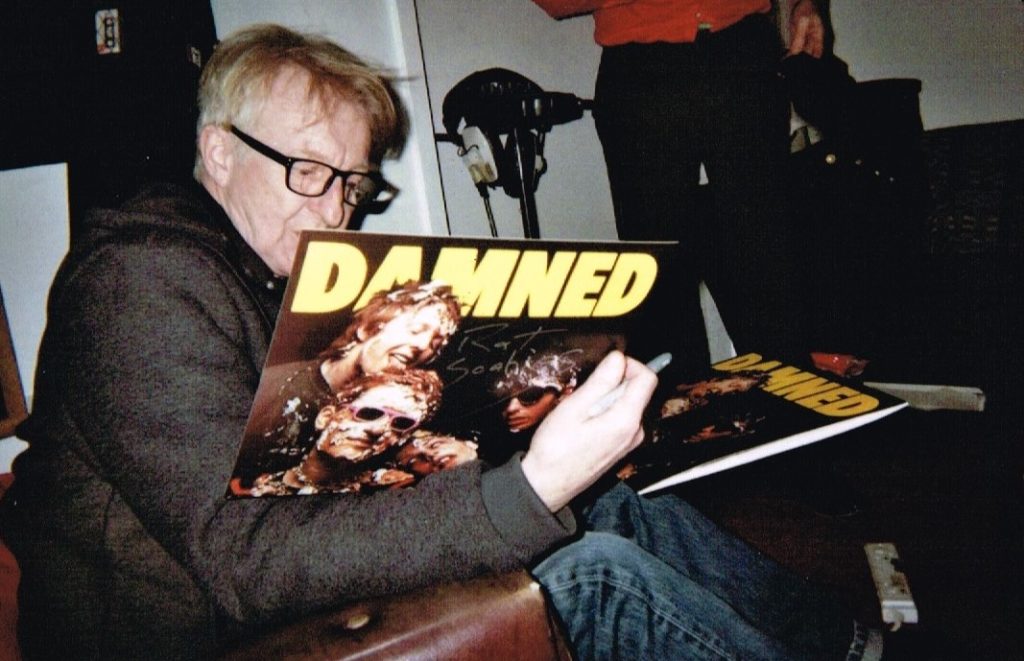 11:30am
Horace Panter and I had met up a couple of weeks previously to record a demo of the Jimmy Cliff song we’d chosen to cover, ‘You Can Get It If You Really Want’. It’s got a vibe that’s a bit Kinks and a bit ‘Keep On Running’ by The Spencer Davis Group, but it’s early days and as things unfold it’s apparent that anything could happen. Horace arrives, as wonderfully polite as ever, sporting a huge grin and a marvellous bass guitar. The drums are ready to go and Rat delivers in spades in next to no time, one take. We ask him to play another for the sake of coverage and he dutifully obliges, a smart groove with great precision.

12pm
The bass and drums are recorded so fast in the session that if you blinked you’d miss it, but the quality of what’s been laid down comes from decades of dedication, an indicator as to how good the personnel really are. There’s already too much talent in the room and there’s plenty more to come! 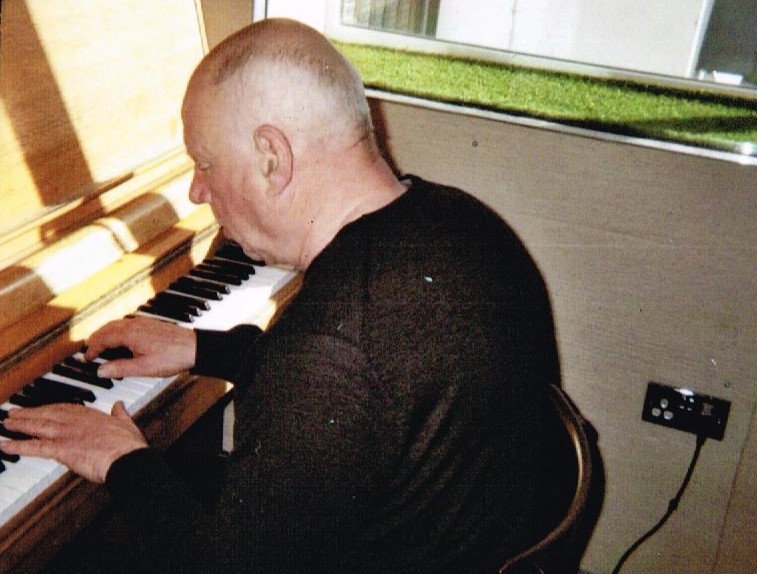 1pm
Our keyboard player Neil Innes aka Mr Bonzo Dog or Ron Nasty from the Rutles arrives. He’s flown in especially for the day as he now lives en Francais. A Vox Continental has been earmarked for his performance and as the organ warms up a valve at a time, Neil tinkles with the keys that read in negative – black becomes white and white black. ;“This sounds like Sooty” he says. which is not 100 miles from the truth, but after a ploughing guitar line has been laid down, the contrast is astounding and really works.

Finding the right guitar took three goes today. Instead of librarian reggae on the off-beat, there’s a Steve Jones-type chug in operation, but the Gibson SG is a little too heavy, a Kramer guitar with a metal neck is settled on and this sits really well with the bass and drums.

2pm
The track has a critical vocal and The Spammed’s resident singer, actor and comedian Kevin Eldon, has arrived and is warming up. As is the vocal booth which needs a portable radiator to make it more habitable. The demo recording seems to have really helped him get his head around the track, as a well thought through but equally spontaneous vocal falls out of Kevin. There’s a lot of excitement in the control room at this point. Exactly how he does his performances is part of his mystery, you’ll hear a lot of cleverness and subtleness in the delivery, but it’s never over careful or self-conscious, it’s just really great, there’s no other word for it. 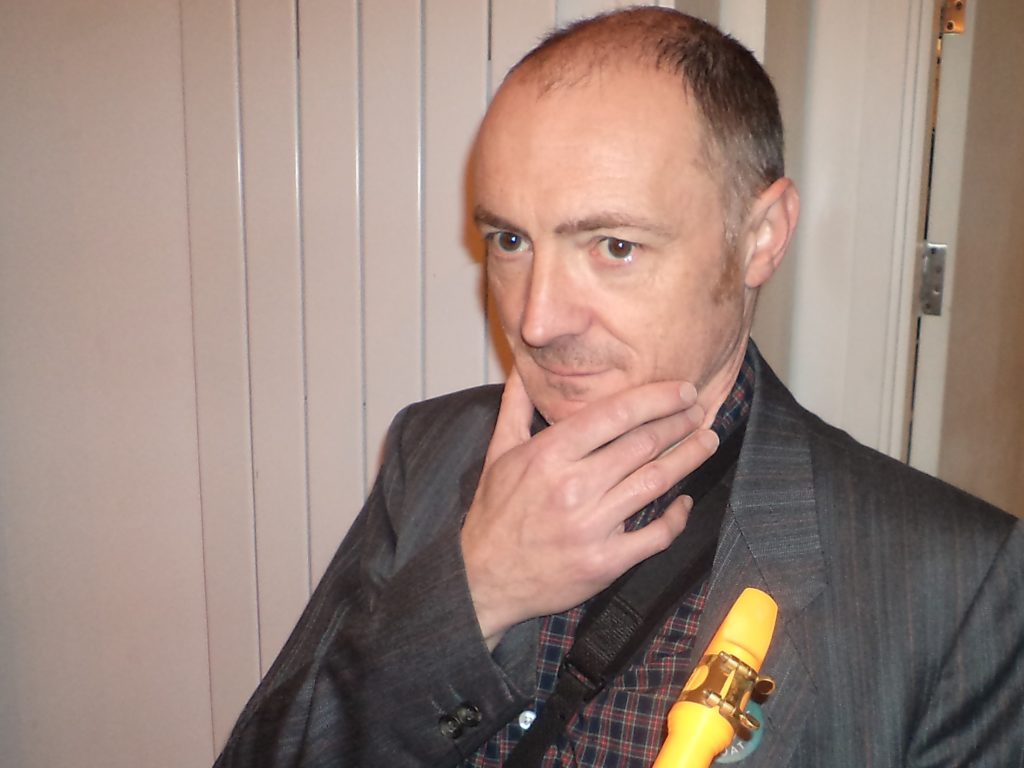 4pm
The track seems to be cemented in place, but there’s still plenty of room to move. Hence the arrival of Terry Edwards, a very well know brass player who has worked sessions with everyone from P J Harvey to Tom Waits. As a previous signee to his Sartorial Records label (I’ll be eternally grateful for him putting out my third album ‘Wax & Wayne’) I invited Terry to session. Terry gets the main room and the nice lights as the evening sets in and we work up the brass section. We start with sax and then Mr T moves on to the trumpet main line, distinctly referencing the Jimmy Cliff original.

5pm
With the session done – we’ll return to mix it all another day – it’s tidy up time. Neil provides us with a rare treat – he’s considering releasing some Rutles’ alternate mixes for fans at gigs, and washing up becomes a heavenly experience as he gives us a sneak preview. Neil is umming and arrring about the mastering but it all sounds pretty divine to me. 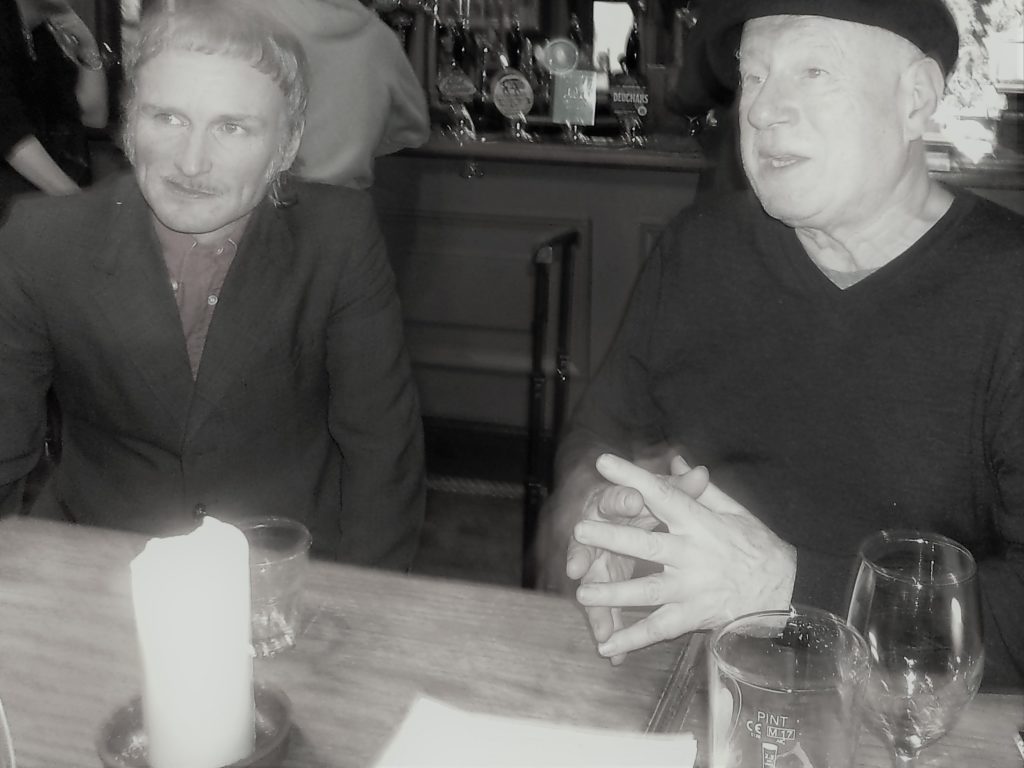 6:30pm
Pub time. Horace has to leave as he’s driving, the only disappointment of the day. Off to a nearby pub. We’re the liveliest table in the room. The conversation – whether about transformative ideas, anecdotes or pure slapstick – is highly memorable. Rat waxes about the influences which made up The Damned, a highly unexpected eclectic mix of Miles Davis, Soft Machine and obscure 50s rock and roll. As well as living in LA making film soundtracks with Joe Strummer and spending heady nights at The Viper Rooms. It’s time to call time as last orders approaches, and Harry Pye and I walk with Neil to the nearest tube. it all worked out again, it seems to every time with The Spammed. Horace calls the next day and leaves a voice message waxing lyrical about it being a fabulous track. Time to dig into the audio and translate the vibe.

Here, Micko shares his studio diary from the day, along with a few candid video clips. So, if you have a problem if no one else can help, and if you can find them….maybe you can hire The A-Team.“
http://www.specializedproject.co.uk/who-we-are/about-specialized/ 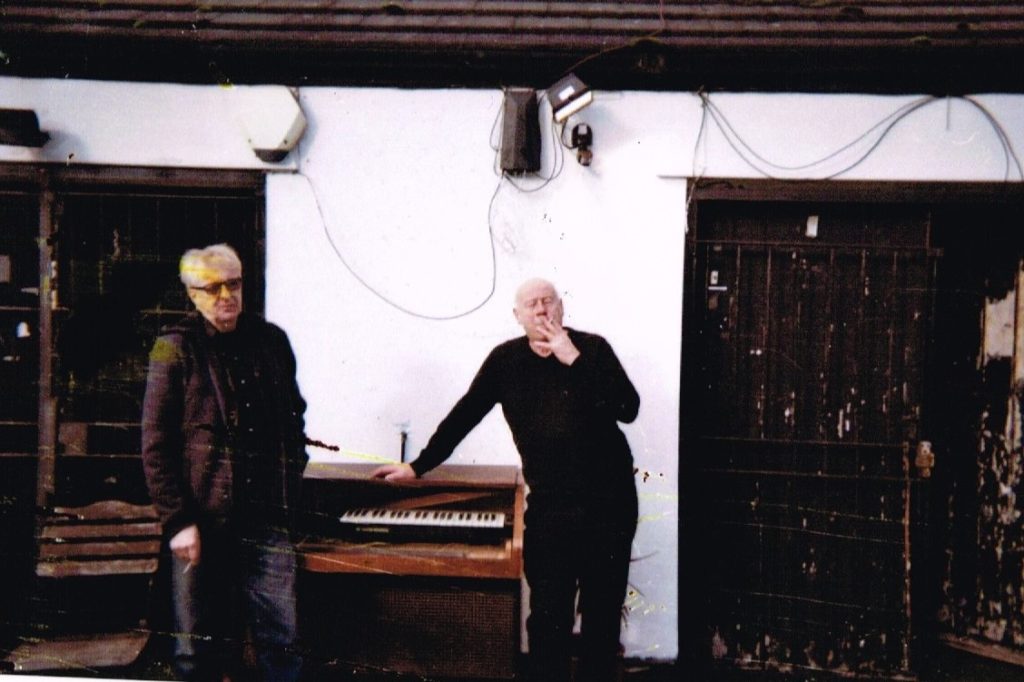