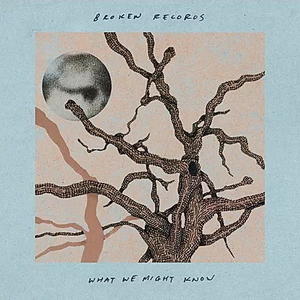 I first encountered Edinburgh’s Broken Records over a decade ago. They were supporting Emma Pollock at the city’s Cabaret Voltaire venue, and there seemed almost too many of them for the stage – seven at the time. They were absolutely fantastic and I saw them numerous times supporting and headlining. They issued several singles and then signed to 4AD, who issued their first two albums, 2009’s Until The Earth Begins To Part and 2010’s Let Me Come Home. Their third album, Weights & Pulleys was released on their own J Sharp Records in 2014, and now, are after a hiatus they have given us What We Might Know, again on their own label.

The album opens with the stirring ‘They Won’t Ever Leave Us Alone’ and ‘Let The Right One In’ which feel like a call to arms. It must be observed that they’ve never sounded so consistently upbeat on record. That’s not to say they’ve sounded miserable for their career, but the euphoria and energy within is infectious, as typified by a track like ‘The Inbetween’ which explodes like a firework display. A slower, more reflective track like ‘Anytime’ still exudes warmth.

Broken Records have sensibly avoided repeating themselves over the years, and there’s new influences that aren’t discernible on earlier recordings, or if so, much more discreetly. ‘Perfect Hollow Love’ and ‘Someday You’ll Remember Me’ sound like New Order meeting Out Of Time-era R.E.M. with a hint of soul, and while still recognisably Broken Records, it is great to hear them investigating new avenues and incorporating them into their music.

While they’ve always had an ‘epic’ sound to proceedings, if you compare this album to their debut, the sweeping strings have moved away. They still sound like a band who should be filling huge venues on a regular basis, but the early description of them sounding like if ‘Nirvana came from Belaruse’ is not accurate of Broken Records 2018.

That night I saw them in 2007, there was a sense that this was a band who were special. Despite lineup changes, the core essence of this wonderful band remains. Come gather round people, wherever you roam, and admit that Broken Records are as good as they’ve ever been, and still deserving of a big(ger) audience. Despite the time between albums, it has been put to good use, and the final effect is of a band who still have a good deal to offer listeners, as well as explorations of their own…