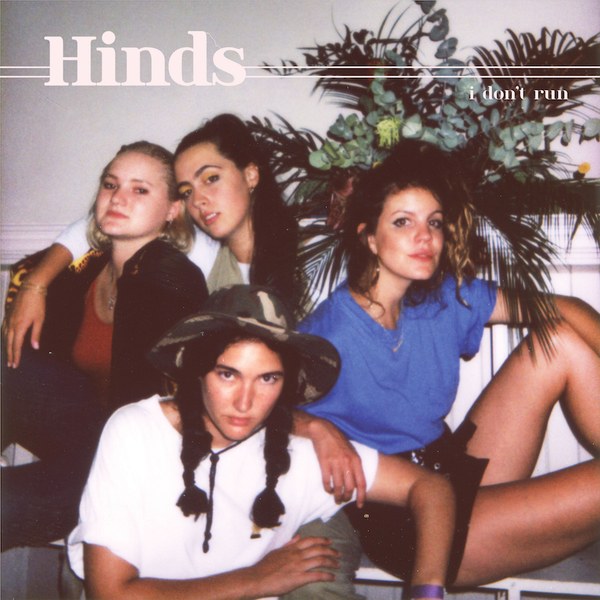 “Dreams, the night, all the moments that surround bedtime we feel are the most interesting ones of your daily life. It’s when you’re more free, it’s when you’re not faking anything. And in this world we are living, looking for the most authentic moments is a challenge,” admits Carlotta Cosials, one quarter of Madrid garage rock cuarteto Hinds and one of the group’s two principle vocalists and songwriters along with Ana García Perrote, in a recent interview.

Authenticity is a word that summed up Hinds very well on the debut album Leave Me Alone – it was an all encompassing concept that ran through their fun music videos reflecting the close bond between members, unpretentious album artwork, self-controlled lo-fi production and their coarse unpolished dual vocals.

However, perhaps something that didn’t measure up to their authenticity mark was their lyrics – which, although they reflected their Botellón party-followed-by-hangover lifestyle – were often confusing and unskilled (understandably a second-language barrier predicament) and haphazardly hard to engage with. They have admitted that were afraid to offend anyone.

Titling your second release I Don’t Run suggests more up front and brave lyrics. Hinds’ lyrics are much more understandable this time around without compensating for their idiosyncratic and engaging perspective on 20-somethings-partying in the Spanish capital. Although on ‘The Club’ they encourage partying, they also reflect on the emotion consequence of a one night stand: “Last night was wrong, I know you don’t need a lover.”

‘Tester’ and ‘Linda’ are also both bold reflections on the impermanence of youthful relationships, with the protagonist in the former feeling like a sexual crash test dummy to a cheating partner, confrontational lyrics include: “So this is corny when you brush my hair away. Should I’ve known before you were also banging her?” While the latter demonstrates how quickly relationship becomes loveless, comparing two opposing feelings: “When you ring my bell and I wanna be ready with your smile” with “When you ring my bell I wanna be ready for your hell.”

The best lyrics are on ‘Finally Floating’ though in which the songwriter desperately wishes for insomnia to avoid going to sleep, as dreams can’t be controlled and often reveal the truth. “I need to stay awake tonight. Because you’re slipping in my mind“. The truth being a common theme throughout I Don’t Run.

Musically, you know what you’re gonna get with Hinds. It’s a consistent style that carries on from their debut. Simplistic, jangly guitars that imagine sitting on a park in a summer afternoon contrasted with vocalists Carlotta Cosials and Anna García Perrote singing together in a harsh often shouty impulsive out-of-sync tone. It’s good that they have their own style and that producer Gordon Raphael (who has worked with another Garage rock band The Strokes) has left them to their own devices.

However this rigid predictability can grow tiresome on a 11-track LP, especially when you hear intriguing little hints of how they could grow. The pre-album single ‘Caribbean Moon’ – a cover of 1970’s song by the late Kevin Ayers – failed to make the album but has a calypso breeziness which is rather catchy and refreshing and could have developed into something more. Whilst their most lo-fi effort yet ‘Ma Nuit’ (French for My Night), the last track on I Don’t Run is a sombre bedroom-recorded torch song sung in French and Spanish with just the strumming of acoustic guitars and atmospheric bird chirping as vocal accompaniments. More songs in Spanish could add to their authenticity and diversifying the elements of the genre could have made the album more interesting. Yet they are still one of the most bona fide groups in indie music today.

I Don’t Run is out now on Lucky Number.