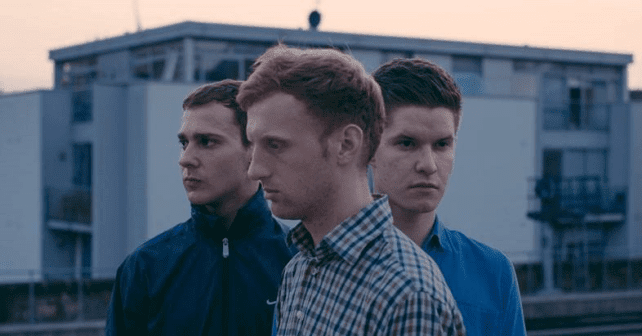 London’s Real Lies are back and rather than attempting to put their own spin on the sound of New Order or Pet Shop Boys as they did on 2015 debut album Real Life. Their brooding new single ‘The Checks’ takes a dark detour down the deserted tunnells of the underbelly of London’s city life and back to the dimly lit dance clubs of the late nineties. Dirty beats, skittering samples and infused with an ominous stream of consciousness ‘a list of questions in a mind that knows it should be leaving,’ it sounds like Underworld and mid-period Depeche Mode stretched into the unique Real Lies orbit over seven minutes which makes it rather remarkable. (BC)

The Horn The Hunt – Northern Dreams

They haven’t been around for quite a while. Almost three years to be exact. But The Horn The Hunt are back, and the duo of Clare Carter and Joe Osbourne are back with a life-affirming vengeance.

The Horn The Hunt’s previous album The Last Winter was released in July 2015. Since that time much as impacted upon Carter and Osbourne, including bereavement, relocation from their Yorkshire home to the Canary Island of Lanzarote in pursuit of a different way of living, a life-threatening illness and the creation of life itself. These experiences have all informed the writing of the material that now comprises their brand new album.

Firewall & Silencio, due for release on the 11th of May, will be the band’s sixth full-length recording and ‘Northern Dreams’ is the lead song to be taken from it. Now back in their native Yorkshire, ‘Northern Dreams’ marks both a physical and emotional homecoming for Carter and Osbourne. It tears along with the clearest of synth intent, helped along its joyful way by the nagging propulsion of Joe Osbourne’s guitar and Clare Carter’s magnificent voice. Riven with tremendous resilience and great hope for the future, it all makes for the most emphatic of returns. (SG)

“Don’t you dare say you do not know me.” On the new Helena Grunsteidl-directed video for ‘Conditions’, Ella Williams stares intently into the camera lens, defying you not to be aware of just exactly who she is. And for those who may be foolish enough to admit that they don’t, she is the 21-year-old American musician who trades under the name of Squirrel Flower.

‘Conditions’ is the lead single from Squirrel Flower’s second EP Contact Sports which will be reissued and presented on vinyl for the first time on the 20th of July 2018. This release will come in a limited edition run of 300 copies, featuring two new bonus tracks.

Bristling with a deceptively distorted power, ‘Conditions’ operates in a similar musical ballpark to those in which both Big Thief and Frankie Cosmos often play. It comes as little surprise to find that Squirrel Flower has supported both of these acts on tour as her words also possesses their heightened sense of emotional equivocation and their music’s unbridled burning intensity. (SG)

MNNQNS – If Only They Could

FatCat Records signings MNNQNS (pronounced Mannequins) from Rouen, France. They introduce themselves with their cracking debut track ‘If Only They Could’ that’s frenetic rhythms, scattergun guitars and Adrian D’Epinay’s vocals light the blue touch paper on this fantastic song, that possesses a vital urgency that recalls the work of Television and the Cardiacs. It’s lifted from band’s first release will be the Advertisement EP. (BC)

Lowly return with a follow-up single to their wonderful debut album Hebda of last year that came out on Bella Union. Wood depicts a band adept at subtle shifts in sound and enveloping vocals and mood. Haunting and ethereal, there are progressive flourishes that hint at yet more depths to be plunged from Lowly from Radiohead to Björk and Talk Talk, Low possess echoes of all of these groups yet shape-shifting sonics mould them into their own image. Outstanding. (BC)

“Discover Russia You Haven’t Heard Before!” is the strapline of RUSH, the non-profit, non-governmental Russian Music Export organisation whose aim is “introducing and promoting the best Russian emerging artists to the international music community.”

Among their promoted artists like the dance-punk group WET RED; electronic avant-popster Kate NV; and sharp garage rockers from Siberia (the beasts from the east?) The Jack Wood are the St Petersburg-originating, now Berlin-based and Prince-influenced, queer electro-punk cabaret SADO OPERA, described as “one of the most ear and eye-catching bands in Europe.”

And arty this certainly is. The song and the video relates to two classical works, René Magritte’s “The Lovers” in which a couple attempt to kiss through the cloth each wears over their head, both compromised by the cloaks and masks of performative identity; and Gustav Klimt’s “The Kiss”, a well-replicated symbol of romantic love so sweet and golden.

If SADO OPERA are committed to one thing more than having a good time, it’s breaking down the borders of gender, sexuality, nationality, and anything else that “prevents us from having an even better time.” SADO OPERA release their debut album later this year. Both they and the RUSH organisation will feature at The Great Escape in Brighton (18-19 May). (DB).