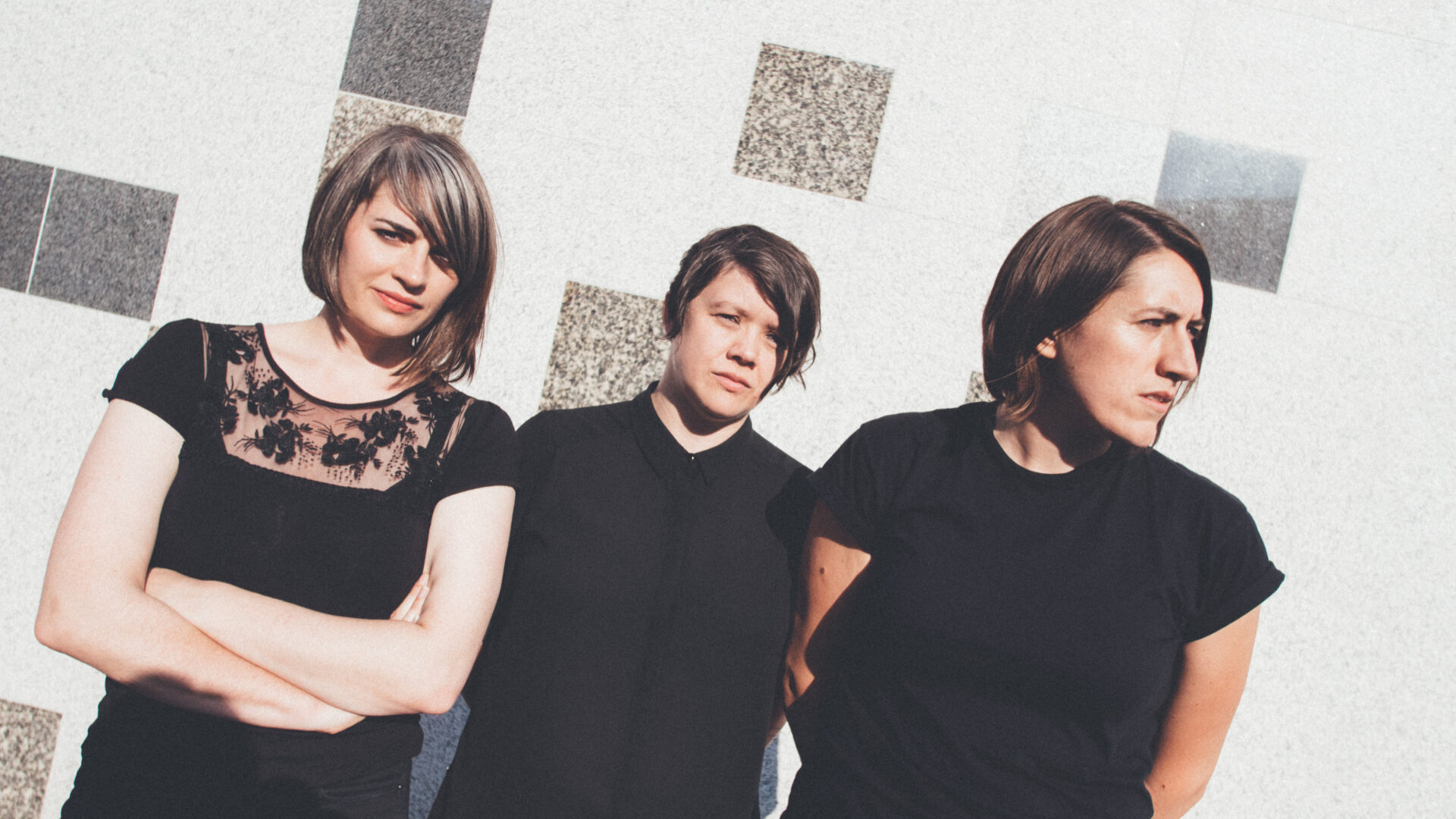 Hi, how are you today what’s the weather like?

It’s grey and cloudy but to be honest, you get used to it being a Mancunian. It’s almost comforting having a reliable, grey sky.

Usually by me in my living room with my acoustic guitar then if it passes the ‘catchy’ test, i.e. gets stuck in my head, then it gets taken to rehearsal. If I can’t remember it then it gets binned.

Yes and I usually end up saying something really stupid too! I met Mary Timony from Helium when LIINES supported Ex Hex a few years ago. Leila our drummer said “tell her Zoe” – by which she meant “tell her you’re a big fan and how much she’s influenced you!” – but somehow my brain translated that to me blurting out “I’m 35!” out of nowhere. I was (still am) mortified. I did get a lovely photo with Mary though!

I really couldn’t care less about the Royal Family. There’s too much shit going on in the world and way too much attention given to them – GO!

I always wanted to be a mechanic. I love the idea of getting down and dirty and fixing things with my hands and it’s quite male dominated. It’s rare you see a female mechanic. Aside from Charlene Robinson (Kylie Neighbours) and Debbie Dingle (Emmerdale) I’ve never seen another one. I could be the third.

What’s your experience of being a female working in the music industry?

You know, sometimes it’s hard, sometimes you get spoken to in a completely different way then the lad bands do but it’s teaching me to be less apologetic. For example, I use my own microphone and the number of times I get the high pitched “oooo” as if to say “get you”. It gets quite tiring to constantly have to prove yourself and be taken seriously. We’ve even heard comments from men in the crowd before moaning about “a bunch of girls” about to play. Nothing will make you blast out your set harder than hearing that bullshit. At times people have been pretty obviously derogatory until they’ve heard us play and then they have respect – but that should just be a given. Those are just a few examples… and to be honest, we’ve probably been pretty lucky. Some of the experiences we see other bands post is ridiculous and infuriating. More often than not it just doesn’t feel like a level playing field.

If I read, it tends to be autobiographies and often music related ones. The best one I’ve read recently is Paradoxical Undressing by Kristen Hersh which tells her incredible story from a near tragic accident, to nearly losing her mind and how writing and performing music has literally saved her life. She is such an inspiration to me – as a person and performer – and I always try and see her solo gigs or Throwing Muses shows whenever they tour.

I was head girl with 100% attendance however I was incredibly grungy, with an undercut and too many earings for my right ear (which I used to get told off about). I’m also not academic at all and wasn’t in the top sets or anything so I’m sort of proud of it because I like to think I got it because I’m actually an alright person.

Who are your favourite new acts?

We’ve played with Nelson Can a few times in recent years and they’re honestly one of the most exciting bands emerging at the moment. I’m really liking what I’ve heard so far of Nadine Shah too.

Some of my favourite gigs are when we’ve played to a room full of people who don’t know us and seeing us win them over. The most recent example of that was when we supported Hot Snakes at Gorilla in Manchester earlier this year. It was the biggest venue we’ve played and it just got busier and busier as our set went on – but rather than chatting through, slowly but surely more were taking notice and the response by the end was awesome. But then we also played our first Manchester headline gig for a while in March and it sold out in advance, so you can’t not list that as one of the best because it was such a special night for us.

This has to be Man-Size by PJ Harvey. I remember seeing the video on 120 Minutes and it absolutely blew me away; the opening three chords, this woman in underwear, no make-up, greased back hair – she looked so strong and so free and so unapologetic. It had such an impact on me as a 13 year old girl. It always stayed with me.

We like to get pumped up on the way to gigs – our main song of choice is Vengeance by New Model Army. It’s a collective love of the band.

What were your favourite bands growing up?

I’ve been told on numerous occasions that I look like Maggie Gyllenhaal so I guess her to keep it authentic, though we’d need to see if she can pull off a good Manc accent, unlike Daphne from Frasier.

I have a lovely collection of vinyl. I love it. The whole experience of a physical product – the large artwork, taking out the record and putting it on your record player and listening to it in the order the band wanted you to rather than the odd song coming up on shuffle – can’t be replaced by streaming. Not that I don’t do this too, but vinyl is a special experience. I was so pleased to be working with a label (Reckless Yes) who are so passionate about vinyl. So far we’ve put out our double A-side 7” Disappear/Be Here and now our debut album Stop-Start on 12” – both on limited white vinyl.

Wow… good question! For me a great cover version is when the band have put lots of effort into making it a great and interesting alternative. I love Nirvana, who did a some excellent covers – Love Buzz is probably my favourite. I also love The Slits’ cover of Grapevine. We actually got to play this (in our old band) with Viv Albertine a long time ago! An amazing experience – she played guitar – and it went down so well she screamed to the crowd at the end – “Should we do that again?!” So we did!

Tell us about your debut album?

Our debut album is Stop-Start and came out a few weeks ago. We’ve been working on it for actual whole years so to finally be near the release date is very exciting – and almost a relief! A lot of the songs are about relationships and loss. Over the last few years we’ve had a varying set, but the ten songs on this album are our core and we wanted to make sure we were putting out a set of songs that represents the early days of LIINES, with songs like Never There and Blackout, to now with songs like Shallow and Disappear. But also there are some slower and more different sounding tracks. It’s also being released on 12” limited white vinyl, as well as digitally, by our label Reckless Yes and a load have already gone through pre-sales. Our friend Lisa designed the artwork and we love it! All in all, we’re really proud and can’t wait for people to hear – and hold – it.

What was the concept behind your new video?

Our new video is for our latest single Cold (out on all digital platforms). We wanted the video to portray the aloneness and isolation this song represents. To do this we decided to film me roaming the back allies of Manchester’s empty Northern Quarter in the middle of the night! This involved setting alarms ridiculously early to get in place for 4.30/5AM! I definitely got my steps in that day! We’ve collaborated for a second time with Tom Quaye/0161, who did our video for Shallow. He’s such a brilliant and and creative talent and we’re really pleased with what he’s delivered for us.

Are you playing any more shows?

We have a big gig coming up in Manchester, playing The Membranes and Friends all dayer at the o2 Ritz! The only other gig we have announced is Head for the Hills in Ramsbottom in September, but fear not we have lots more coming up!

I would love to collaborate with 1990s PJ Harvey. She was the biggest influence and the whole reason I ever picked up a guitar. If she wanted to record some lost tracks for Rid Of Me with me then I’d definitely be up for that.

25 May: Dot to Dot Festival, Manchester