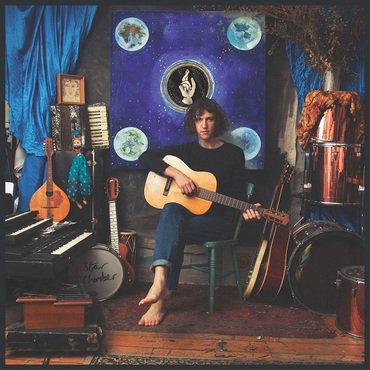 In these days of streaming and the associated reduced attention span of the average music fan, it’s a brave artist who starts their debut album with the most lo-fi, understated song on the record. But that’s precisely what Max Kinghorn-Mills, AKA Hollow Hand has done by beginning Star Chamber with ‘Ancestral Lands’, a song which sounds like it could have been recorded on his phone, but on further examination proves to be a subtly lovely track, a faint brass band swell (it could be a synth!) towards the end adding to its poignant feel. In fact, Hollow Hand released a limited edition cassette called Ancestral Lands a couple of years back, albeit without this titular song, and therefore it joins the exclusive club of albums-not-including-their-title-track, along with Julian Cope‘s World Shut Your Mouth, Primal Scream‘s Screamadelica and The Jesus & Mary Chain’s Psychocandy, (if you know any more, pop them on a postcard to God Is In The TV at the usual address).

The album is self-recorded and has a very natural feel, even to the point of having audible birdsong on the songs recorded during the open-windows times of the summer. It is however far from a lo-fi album, despite the first track – ‘One Good Turn’ comes alive with Byrds-y guitars and a sunny vocal that brings to mind the aesthetic of Sweet Baboo without directly sounding like that artist. You could imagine the two of them putting on a fine double-bill though.

There are a couple of previous singles on the album: last year’s ‘End Of Everything’ and ‘A World Outside’, the latter containing a spoken word Radio 4 sample (!) and a playful riff alongside some state-of-the-nation lyrics “There’s a world outside I no longer feel / And it’s hard to make my mind up anymore”; the former is tucked away in the middle of Side 2 and recalls the smart pop of Andy Burrows‘ solo project I Am Arrows back at the start of the decade. “Cherish everything that makes you smile” is good advice indeed. That lyric is typical of the warm-hearted, ‘be grateful for what you have’ nature of the album as a whole.

Elsewhere, the irrepressible ‘Blackberry Wine’ is a lot of fun and ‘Milestone’ wouldn’t sound out of place on Midlake‘s classic The Trials Of Van Occupanther album. ‘Avalon’ expands on the message of making the most of the present, as is apparent through much of the record, noting “You’re here for a time / Then you’re dead” with a tune so sunny that it couldn’t possibly sound like a bad thing.

‘Land Of The Free’ is a beautiful way to end the album, the longest track by far at almost six and a half minutes, it ebbs and flows and contains some wonderfully sympathetic backing vocals.

Star Chamber is in many ways a perfect antidote to the world in these difficult times, a warm, witty and very human record.

Star Chamber is released by Talkshow Records on October 19th 2018.