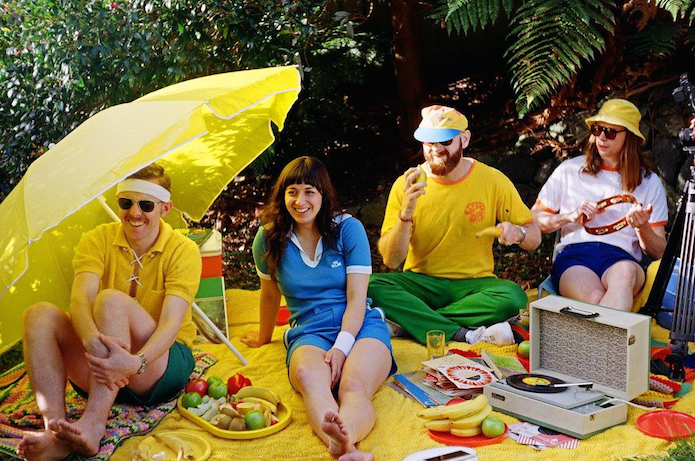 New Zealanders The Beths released their gem of a debut long player Future Me Hates Me earlier this year and it’s turning into a sleeper hit. Elizabeth Stokes commands a vocal range that bristles with both a bold knowing and a vulnerability. Underscored by dark lyrics that explore complex topics like being newly alone and the self-defeating anticipation of impending regret, laced with wry, bittersweet heart on their sleeve melodies that tap into classic indie pop and girl groups from the ’60s.

We caught up with the band for our 20 Questions ahead of their UK dates this November.

Hi, how are you today and where are you right now?!

I’m okay, currently straddling lots of really great things and some difficult things so it’s a mixed day. I’m currently in the van from Christchurch to Queenstown. It’s a beautiful day and we just stopped by Lake Tekapo and had a look at Mount Aoraki, the tallest mountain in New Zealand!

Most of my songs start as experiences or emotions that make me want to put pen to paper. Once they’re in that form, I can start playing with melodies.

The first song that I wrote that made its way out into the world was a Wizard Rock song called Lily’s Eyes. We played it in the folk band my best friend and I started in high school.

What was the first single you bought?

The first single I bought was ‘When It’s Over’ by Sugar Ray.

What are your songs about?

I can picture where I was when I wrote each song very clearly, and what I was feeling. But I don’t necessarily feel like I need to add all that baggage to them, I like the way the stand on their own without too much extra colour from me.

I’ve seen people compare your sound to Flying Nun bands, do you listen to any of these?

If you are a guitar band from New Zealand it’s a given that it will come up. I never really listened to those bands personally, but Jonathan has. My favourite Flying Nun act is Bressa Creeting Cake. And from their current roster, Wax Chattels and Mermaidens.

I read that you studied Jazz at university what sensibility do you think this brings to writing songs with the Beths?

We all studied jazz. It’s hard to say; I really enjoyed just living and breathing music for four years. Practising for hours a day and really getting inside how things fit together. We all speak the same language now, which I like.

I don’t really know. If I didn’t quit my job earlier this year I’d still be teaching trumpet. If I didn’t get that job I’d probably still be working at the library and doing music part-time, which I liked. If I didn’t study music I probably would have studied linguistics, or maybe live sound engineering.

What’s your experience of being a female working in the music industry?

I’ve been very lucky and been supported and treated well, and the bubble I’ve ended up in is one where it’s not often an issue for me personally. But it’s often that the bubble pops and you get a personal reminder that you are not the norm. I really think that I got lucky when I was school age and racked with doubt and imposter syndrome, that I had a best friend to make music with judgement free, and a circle of friends who never/rarely questioned the validity of what we were making.

Who are your favourite new acts?

The Goon Sax, they’re a band from Brisbane. Their second record just came out and it’s my new favourite.

I’ve seen your album mentioned as a sleeper hit from this year, but what albums would you recommend from 2018?

What are your top five favourite bands/artists?

I think the standard of New Zealand music is much much higher than it has any right to be. It’s just small, and isolated. So extensive touring isn’t very feasible. Even the nearest country, Australia, is a three-hour flight away.

I’d rather not have a film of my life, I think. Maybe a cartoon would be alright.

Our friends Hans Pucket playing Loyal by Dave Dobbyn at a house party in 2015. I apologise for how NZ-centric this answer is.

Tell us about your new album?

We recorded it at Jonathan (our guitarist)’s project studio on Karangahape Road in Auckland. We were all working and playing in other projects, so we did sessions when we could squeeze them in and we finished tracking it about a year ago. Jonathan finished mixing and mastering it at the start of the year.

Will this be the first time you’ve played in the UK?

No, we were over in May of this year. We did 11 shows or so in the UK, a few with this London band ‘Fresh’, who were so lovely to work with and who helped a lot when I was booking on my own.