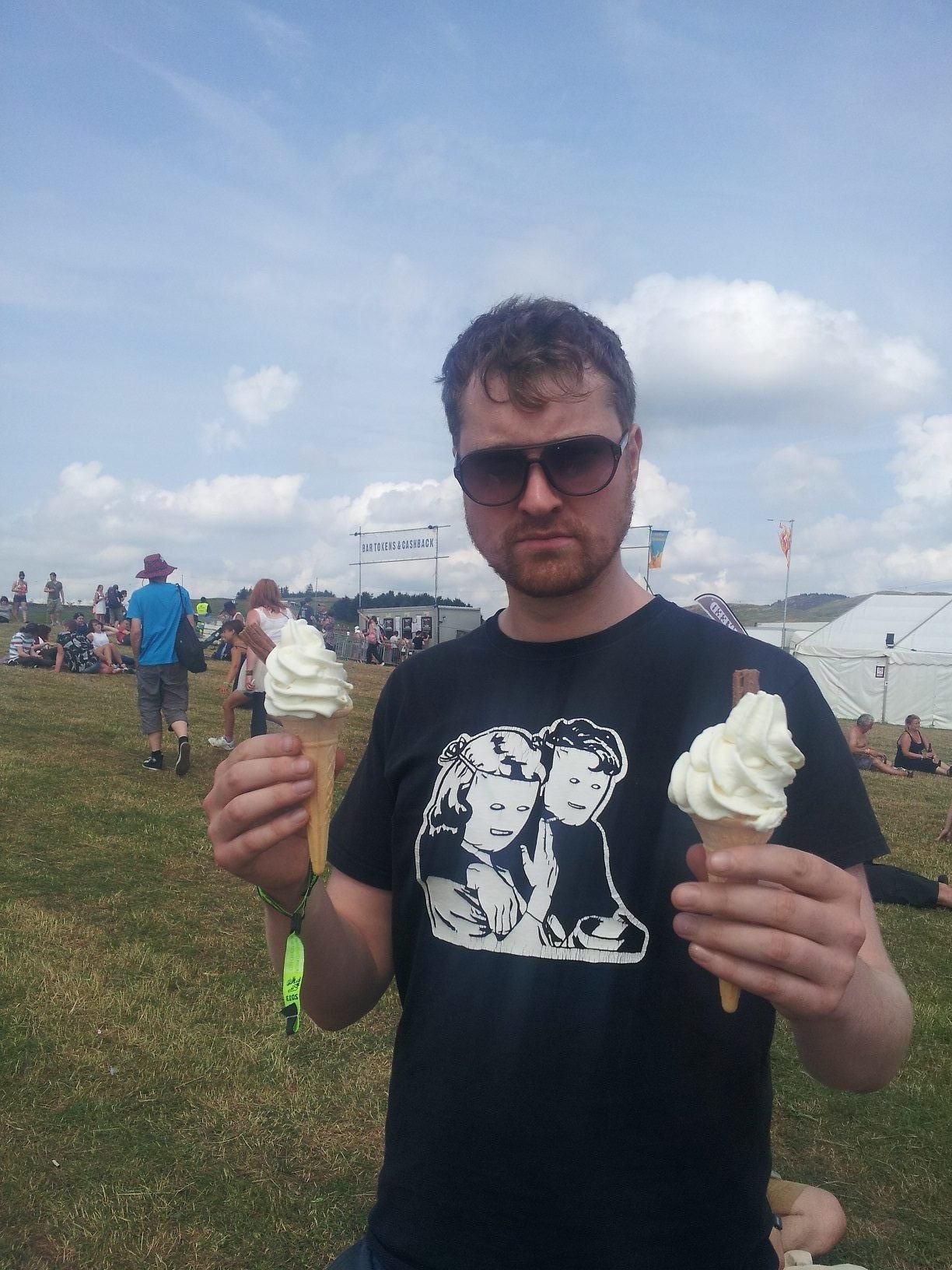 Godfrey McFall, of the band Flutes – who were featured on GIITTV previously – passed away 24th September 2018 after an accident while hiking in the Scottish Highlands.

From Glasgow, Scotland and later living and working in London, he had also lived in Miami from 2015 – 2017 where he enjoyed going to see The Ordinary Boys, Florida’s only Smiths tribute act who played in tropical tiki bars in the sweltering heat. The last gig Godfrey played was for his friends Ash and Amir at their wedding in Canada this summer.

“He didn’t just inspire me to be a better musician, he made me a better person. He literally handed me music to listen to that I’d never heard, and those bands are now exclusively my music taste.” – Alex Walker.

“Would you review my band’s new album?” I’m definitely paraphrasing here, but that was the gist of the text that Alex Walker (drummer for a number of bands and artists) sent to me one day in late 2012.  It’s not a strange request really, and I get plenty of them pretty much every day via email.  In this instance, I agreed, and I am so glad I did.

This was Flutes’ one and only album, and what an album it was!  It took me a couple of days to realise that the stereo I was attempting to play it through only had one working speaker.  So this brilliant album, which I had taken for very creatively sparse, wasn’t quite the whole picture.  There was only one thing for it – I’d have to brave the snow, ice, and slush, and go and buy a new stereo.  It turns out I’d barely even scratched the surface, so to speak, as far as this particular album was concerned.  I had most definitely been missing out and, quite frankly and honestly, it totally blew my mind and I was so enthusiastic about it (despite praising it before) I’m pretty sure Alex thought I was completely mental.  The album quickly became a favourite – and it still is one of the best albums I’ve ever heard.  I fought tooth and nail for it to be included in the 2012 GIITTV Albums Of The Year list even though it wasn’t technically out at the time.  My argument was that it was going to be released before the end of the year and therefore it counted and I wasn’t about to back down any time soon.  My tenacity paid off because it ended up at number 47 in our list of 100 albums.

So when the opportunity came to see the band live at Nice ‘N’ Sleazy in Glasgow, I took it without even a second thought.  And then another text from Alex came that morning: “So when do you want to do the interview?”  Interview? What interview?  I’m meant to be doing one?  Who the Hell said anything about an interview?  Nobody told me!

“Oh, right. I thought that was the plan.”  But I haven’t prepared anything!  After much prodding and a text message that basically read: “I mean, it’s up to you. It’d be our first ever interview, and we’d be really excited!”  I finally relented, agreed, called Alex a pain in the arse, and ransacked all of the boxes I still hadn’t unpacked after moving in less than two months before.

“I can’t do it!  I can’t find the bloody Dictaphone!” I replied several minutes later.  “Don’t worry, we’ll figure something out.  We’ll record it for you,” came the response.  Bugger.  Now I have to actually think about what I’m going to ask.  Usually, I’d spend a few days listing potential questions – almost always based around me wanting to know and really understand specific things and entirely to satisfy my own curiosity.

Due to a couple of mix-ups with times, etc, I ended up racing into the city to do the unplanned interview that I sort of half planned on the train in, only to discover that nobody was ready and they had a million other things to do.  On the plus side, this was roughly about the time I discovered that Sleazy’s served Addlestones.  There’s been only one other bar in Glasgow that I’ve come across that serves Addlestones and finding another was a bit exciting.

Finally, everyone was ready and I was led downstairs by Godfrey (who, I’ll admit, kind of intimidated five-foot-two me at this point) to the small venue space under the ground-floor bar.  As promised, Godfrey recorded the interview on his phone.  And he was quick to dispel the initial uneasiness I felt (although I will admit being wary of everything and everyone most of the time) and was so relatable and relaxed and easy to talk to.  I even added a few extra questions that I hadn’t written down just so I could pick his brains a little more.  On stage was a whole other matter, too.  It’s rare to come across someone so creative and with so much passion for music.  Sadly, for one reason or another, I never actually received the recording of our interview and so it was never transcribed or published.  But I can still claim to have been the first.

During their set – which opened with a screening of the short film the band had made – they’d added their Christmas single (which was part of a charity compilation raising money for Shelter Scotland) into the set.  You know those times when something takes a turn in a way you’re really not expecting?  That’s what happened to me, although I can’t remember the exact line in the song.  I was confused for a few seconds before I decided it didn’t matter.  Quite frankly, the whole performance was brilliant, and I’m sorry that this was the only time I saw them play.

By the end of the night, I’d definitely over-indulged on the Addlestones cider (and found out the hard way that a Tesco cheese sandwich is not sufficient sustenance before drinking).  Having half crawled my way out from the venue to the upstairs bar and spotted Godfrey across the room, I made a drunken beeline for him and attempted to tell him how amazing it was and how much it had blown my tiny little mind.

The first words out of his mouth when he saw me were “IT’S NOT BLASPHEMOUS! THAT WASN’T BLASPHEMY! IT WASN’T!”  Huh?  That stopped me in my tracks.  “Wait… What wasn’t?” I asked, frowning. “That line about Jesus.  It’s not blasphemy!”  So now I’m confused and surprised in equal measure.  “But… I didn’t say anything,” I stammered, still confused.  “I saw the look on your face,” he replied. He’d interpreted my brief look of confusion as offence or upset.

I’ve met several musicians and singers over the years, and they can be a little fragile at times.  I’ve been asked if I enjoyed it, were they good enough, did it sound OK, did they do well?  This was the first and probably the only time I’ve spoken to someone where they haven’t been worried about whether or not I had liked the performance.  He seemed genuinely concerned that he had somehow – however unintentionally – upset me or offended me.  Only after I’d reassured him that I had in no way been offended did he ask what I thought of the gig.

In that moment it dawned on me that Godfrey McFall was one of those rare creatures who was equally as brilliant and kind and genuine as he was creative and passionate about what he did, even if the idea of other people liking it too was something he couldn’t quite get his head around.  On our walk downstairs before the interview, he’d asked me how and why the album had made it to 47 out of 100 best albums of the year, and how utterly ridiculous it was.  It’s as if he enjoyed and took pride in what he did and yet was amazed other people felt the same way.

Godfrey McFall was a rare person indeed, and one I will forever regret not taking the time to know better.

“Godfrey was a warm, funny and caring guy. He was always really blown away that there were people who connected with that strange wee Flutes album. We just had the best time together — amazing highs, the occasional low. It was always fun.

He’d have a good chuckle after all these beautiful and sad songs, the last one we wrote together was about Wayne Rooney’s hair transplant.

A beautiful, ridiculous guy – that was him! x” – Andy Bruce