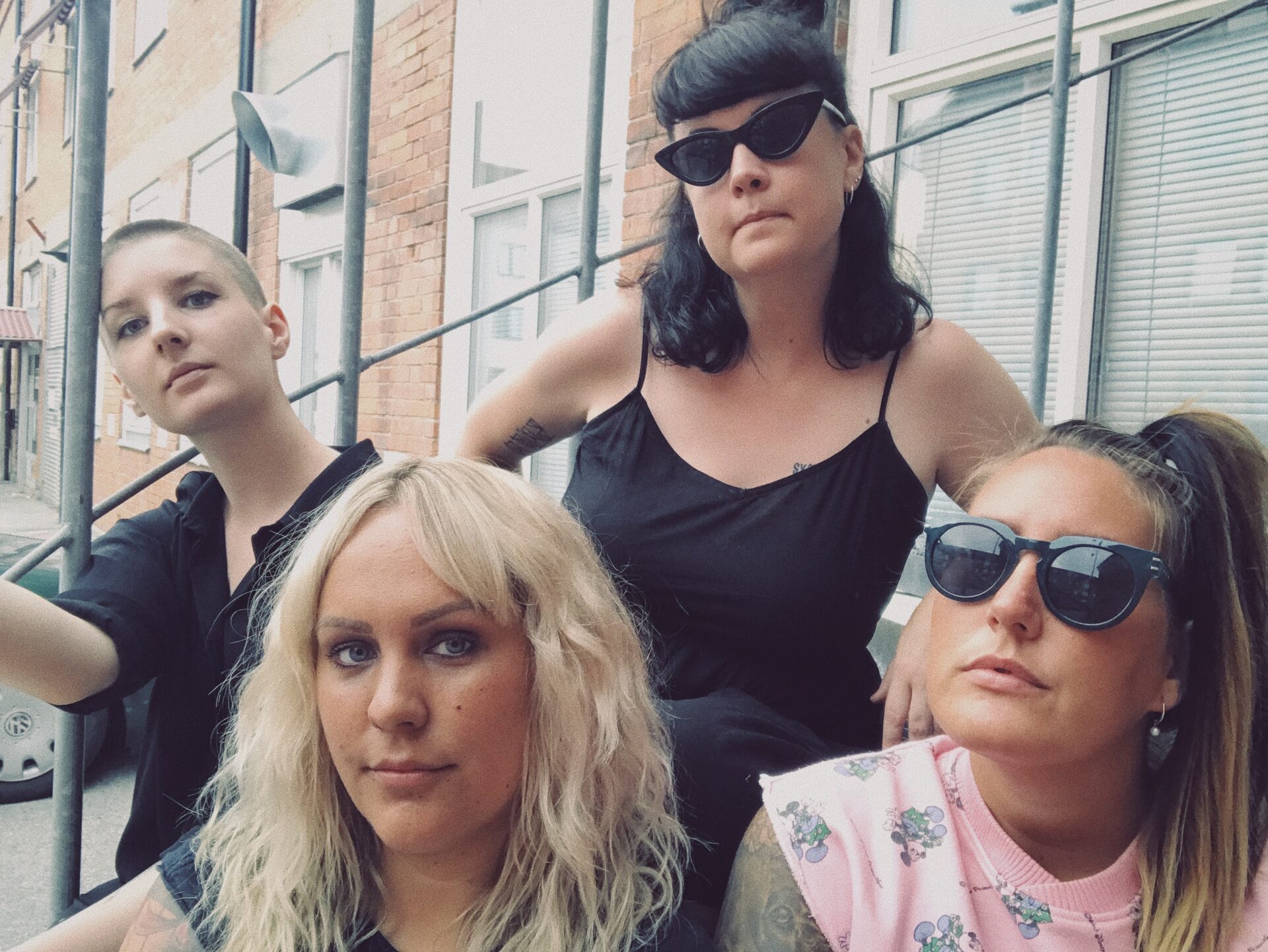 Punk Slime Recordings are re-releasing the debut LP from Malmö quartet Arre! Arre!, finally available today outside of Scandinavia. The album, titled A.T.T.A.C.K was originally released in 2015 on Malmö, Sweden based label Rundgång Records and was one of the most acclaimed rock records in Sweden the year of release – and also being one of PNKSLM’s favourite Scandinavian labels of the past decade. Since then the band’s reshuffled the line-up and recently signed to PNKSLM for the release of the upcoming second album due Spring 2019.

Arre! Arre! forge a careering collision of surfy twangs, clattering percussion and visceral feminist scorched punk. We have the premiere of the new video for album opener and title track ‘A.T.T.A.C.K’ made by bassist/vocalist Katja Nielsen below.

Chrome Sparks – ‘In2 Your Love’

Chrome Sparks returns with new single ‘In2 Your Love’, a retooling of rare groove and soul, laced with twinkling synths and samples, its iridescent magnificence that’s reminiscent of early Avalanches.

The Brooklyn-based artist (aka Jeremy Malvin) drew inspiration from the idiosyncratic demos of George Smallwood, whose sampled vocal served as the starting point for the track. Malvin’s paying homage to Smallwood’s freewheeling spirit, while turning it into something new. “The result is a track that I feel pays homage to an underappreciated musical gem and surrounds it with a breath of new spirit,” Malvin says.

‘In2 Your Love’ is taken from Chrome Sparks’ new Be On Fire EP, which will be released on 1st January 2019 via Counter Records ahead of his forthcoming headline North American tour.

Fontaines DC are back with ‘Too Real’.  The Irish group are one of the most exciting new bands around, possessing a nouse and attitude beyond many of their contemporaries they have recently been touring with Shame. ‘Too Real’ is a jittery palette of post-punk that collapses into a cacophony and a narrative that concerns the deja vu of every day living. Sometimes it’s all too fucking much you see, step away from your social media and let real life flood in. Fontaines DC peel back the layers with a brutal clarity and a disorientating tune, its a sudden jolt of reality. If you want comparisons it sounds like the Fall smeared in a thick Irish accent but it depicts a refreshing band on the precipice of something special.

Singer Grian Chatten says:
“I’d been reading a lot of poetry, specifically Preludes by T.S. Eliot — he makes your mind drift off into romanticism, and then quickly snaps it back into reality — and I remember I shot out of my chair and wrote down just the first line (“None can pull the passion loose from youth’s ungrateful hands”). Then when I came to the band with all the rough lyrics, our bassist Diego interpreted it as connecting to the sort of surrealist, idiosyncratic cyclical structure of Joyce’s Finnegan’s Wake— where the first line is immediately engaging, you’re dropped right into the story, and then the ending leads right back to the beginning again. That’s something we wanted to capture in the video as well, which begins and ends with a wake scene.

So the circular nature of the song and video reflect the circular nature of the book, but also in a sense the surreal repetition of life. I think something strange happens to your soul when you experience something that you’ve already experienced before. We’re always longing for every step in life to be a new, developmental one. To accept that some things stay the same, something cracks within. That’s where surrealism comes in. The song’s chorus is accusatory, and also we wanted to be able to look people in the eye from on stage and sing this to them.”

Bolton vocalist and producer Chrystal revealed her new single ‘Vibe’ on 37 Adventures last week. Chrystal has enlisted the help of rapper Rozwell Fitzroy, her verse adds an extra pop to Chrystal’s bubblegum flow. Splicing hip hop and RnB tinged choruses ‘Vibe’ is an upbeat anthem from Chrystal whose previous singles on 37 Adventures created a stir in 2017 and earlier this year.

Speaking about ‘Vibe’ – which carries on her rich vein of form with John Calvert – Chrystal said, “I was in quite a bad place by the second time I worked with John. I really didn’t think I was going to write anything so uplifting, but by the first day we’d finished two songs, ‘Vibe’ being one of them. John just has a natural way of making you feel relaxed, which helps me to write better songs, plus he’s just mad talented and can make anything come to life with production.”

“To me, this song represents that no matter how bad you think things are, while you’re living on this earth, you will always have another chance. It’s about gracefully letting go of the past and moving forward with hope.”

Park Hotel – ‘Nothing To Lose‘

Park Hotel return with new single ‘Nothing To Lose’ a welcome from the five-piece, centred on the creative duo of Tim Abbey and Rebeca Marcos Roca. Piecing together new wave beats and choppy guitars and entwined vocals, with echoes of LCD Soundsystem and Talking Heads, Park Hotel’s sound is dancefloor ready and labelled with artful knowing. “This concrete jungle will make you feel better,” they exult in unison and synths dance and guitars rifle, its the sound of the urban sprawl, of hedonism and feeling like for one evening you can let go of yourself it’s fantastic!

Park Hotel’s Nothing To Lose EP, which will be released on 30th January 2019. They will be celebrating the EP’s release with a show at London’s The Lexington on February 28th 2019.

Australian’s Press Club’s have shared ‘Headwreck’ – a powerful bracing snapshot of their sound, an urgent cry about demanding better from your relationships (“Don’t be that guy”) – amidst a whirlwind of sinuous alt-rock, the video captures the intensity of four mates in a room just pouring their hearts out. They possess that visceral and ‘inexplicable ability to simultaneously eliciting feelings where you wanna break stuff / hug your mates / cry your eyes out.’

The debut album’s UK / EU release (Jan 25th on Hassle, tour dates in spring) themes of gentriﬁcation and inequality.  Much of their material captures a generation’s experience of becoming bystanders in their own lives.

Rosie Carney’s debut album, Bare, sees the light of day on January 25th via Akira Records. Her new single ‘Zoey’ is an affecting and enveloping cut consisting of a simple guitar and showcasing Carney’s exquisite, haunting vocal tone that wraps itself around your heart in a similar way to Marissa Nadler’s voice can, it turns out it’s inspired by Zoey Deschanel. Its slow-motion melancholia is heartwarming as we plunge into the depths of darkest winter.

Of ‘Zoey’ Carney says, “Every time we pulled the project up I would just call it the ‘Zoey Deschanel’ song. It was a joke at first, only because the song painted scenes of a rainy-day romance in my head. I kept seeing the final scenes of 500 Days of Summer in a loop, and I just remember feeling so melancholy, which is a feeling I quite enjoy. I wanted to make it feel like a warm blanket for people to hide under whilst listening.”

The long-awaited Bare is the product of personal struggles Carney endured while navigating a rapid rise in the music industry at a young age. Discovered and signed to Universal Music’s Polydor at the age of 16, she fought to assert herself creatively within a large commercial system – facing pressure to co-write and even change her name – while simultaneously grappling with depression, anxiety and an eating disorder borne from personal trauma. By 18 she was dropped by the label without ever releasing a song and ultimately left the major label system entirely.