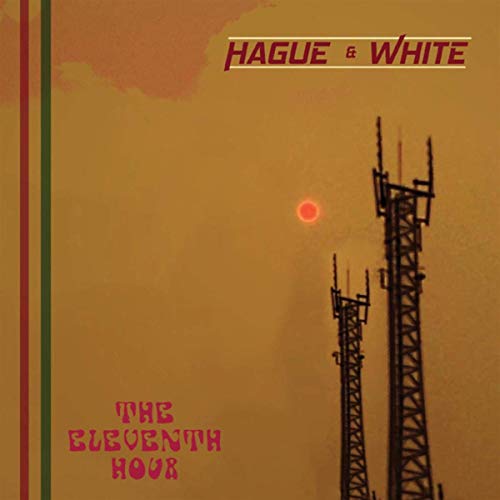 I am going to be quite frank here. When our esteemed albums editor Loz Etheridge asked me to review an album by a new band formed by Paul Weller‘s drummer Steve White, I wasn’t overly excited. A little research revealed that Steve isn’t the only White in Hague and White; Richard Hawley‘s cousin Joel White provides lead vocals and alongside Chris Hague on guitars, keys and backing vocals, the trio is complete. And the name: perhaps White Hague White, or Hague and Whites would have more accurately illustrated the White:Hague ratio in the band.

Being frank again, I was expecting some kind of Noel Gallagher-endorsed fare, maybe a little nod to Ocean Colour Scene. Furthermore, my initial fear was compounded when a casual listen to the album seemed to confirm all I had assumed.

BUT…and it’s a big but…with a little more attention and a second play, The Eleventh Hour really started to click with me, against all of my expectations. By the third listen, it really did all fall into place and the little details that make this album what it is started to appear: a subtle backing vocal here, a lovely wash of Hammond organ there, and all done with a real empathy to the songs.

It’s one of those records that would be extremely hard to date – if it had been handed to me as a long lost late 60s album, like the one by The Dragons from a few years ago that came out decades later, then I wouldn’t have been surprised.  If you do happen to be familiar with that record, then that would give a pretty good comparison of what Hague and White sound like, a kind of psych-soul with hints of The Doors, Steely Dan and Steve Winwood.

The Eleventh Hour eases its way into life with the slow and moody ‘Distant Relative’. Without sounding too muso, (and I’m not sure I could if I wanted to), there are some devastating chord changes with some really lovely piano sitting just over the top and those totally wonderful, plaintive backing vocals.

‘Stranger To Your Love’ picks up the pace with a Northern Soul beat and features the considerable drumming talents of fellow Sheffield native, (well the folks other than Steve White are from Sheffield), Dee Boyle from The Longpigs who very sadly left us last year.

There are songs on here like ‘Face’, that you start to feel like you have known for years after just a few rotations, while ‘Just Be True’ is another Hammond driven stomper and sounds even more like a single than the other songs, which is saying something. ‘I Thought I’ has more really clever details, but Hague and White are really considered in when to apply these flourishes and the music is all the more effective for the room they leave it to breathe.

The albums title track, and last song, sees the record off on a pensive but powerful note, White’s (Steve’s) drumming really takes off and showcases the talent which has kept him in demand for so many years.

Hague and White’s debut is a really strong set of very well presented songs that has the potential to be a properly huge album, (it’s easy to imagine it going down well in the USA for a start), if it can somehow infiltrate the mainstream.

The Eleventh Hour is released by Monks Road Records on 11th January 2019.