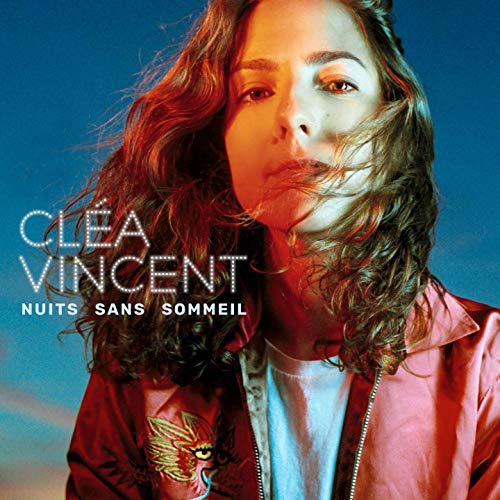 Optimistic, resolute and easy-going are character descriptions you might initially label Parisian Cléa Vincent after reading her joyous interviews (in which she embraces her musical friendships), learning about her career history – in which she bounded back from a circumstantial early-career record label termination – watching her smile-filled free-spirited music videos and listening to her breezy vocals, that at times can feel as effortless as Emma Proulx of Men I Trust. Yet her new second record is called Nuits Sans Sommeil which translates as “sleepless nights” in French and suddenly things are not as they first seem.

This misleading strategy is perhaps on purpose. A multi-layer technique from Cléa Vincent in which she desires to express the existence of her woe but in a semi-hidden fashion beneath rhythmic pop music. Music that is first and foremost is there make you dance and enjoy with minimal effort. Yet deep within is a layer of easily relatable problems that connect to the listener. The title track ‘Nuits Sans Sommeil’ was written a few years ago and was formed at particular painful time in Vincent’s life, so much so that it took producer Raphaël Léger – whom has worked on nearly all of Cléa Vincent’s music from her EPs to her debut – and his persuasion skills to convince Vincent to record it.

Musically, the title track is a satisfying introduction to the album and a good choice for the record’s first single. It’s really soothing with it’s summer air of subtle Caribbean percussion and tranquil keyboards, guided by Cléa Vincent’s floating voice. Just as addictive is the follow-up single ‘Dans Les Strass’, a track which carries the disco-pop glow of her debut Retiens mon désir. It contains this clever pin-pong sound that blends into production rather seamlessly. The French musician reveals what it’s really to like to be a musician that’s fame is growing. She starts off by talking about parties, plus-ones, tonic vodka, schlass (French slang) and neon lights before switching the topic to depression, prozac, scams and confessing “it’s not at all what you imagine” (C’est pas du tout du tout ce que t’imagines).

Another praiseworthy disco track is ‘Sexe d’un garçon’ (Sex of a Boy) as it rather topically questions the ludicrousness of male privilege and an updated femininity in the 21st century. It contains the rather interesting line about gender barriers: “Somewhere between Mars and Venus. If you adjust the focus. You will not see me anymore.”

However, with the album being entirely in the French language this places more emphasis on the quality of the musical side of things for non-French speakers and unfortunately Cléa Vincent’s sophomore record Nuits Sans Sommeil is inconsistent in that department. Apart from the aforementioned three tracks and Ici Et Maintenant (Here and Now) which is a nocturnal synth paradise reminiscent of Air and also contains an interesting croaking sound that resembles a cricket stuck in a plug hole, everything else is really just standard forgettable modern pop stuff. It’s a downward step from her debut album Retiens mon désir which was rather quirky and eclectic in the pop variations of the tracks. She’s devolved from sounding like playful compatriot Jain to the mediocre electro of Javiera Mena’s latest work.

When discussing the longevity of a musician’s career in an interview, she said something along the lines of “those who remain adopt a philosophy of simplicity.” So at this stage of Cléa Vincent’s career perhaps simplicity and provoking dance movement at her concerts is the Paris musician’s primary goals.

Nuits Sans Sommeil is out now on Midnight Special Records.