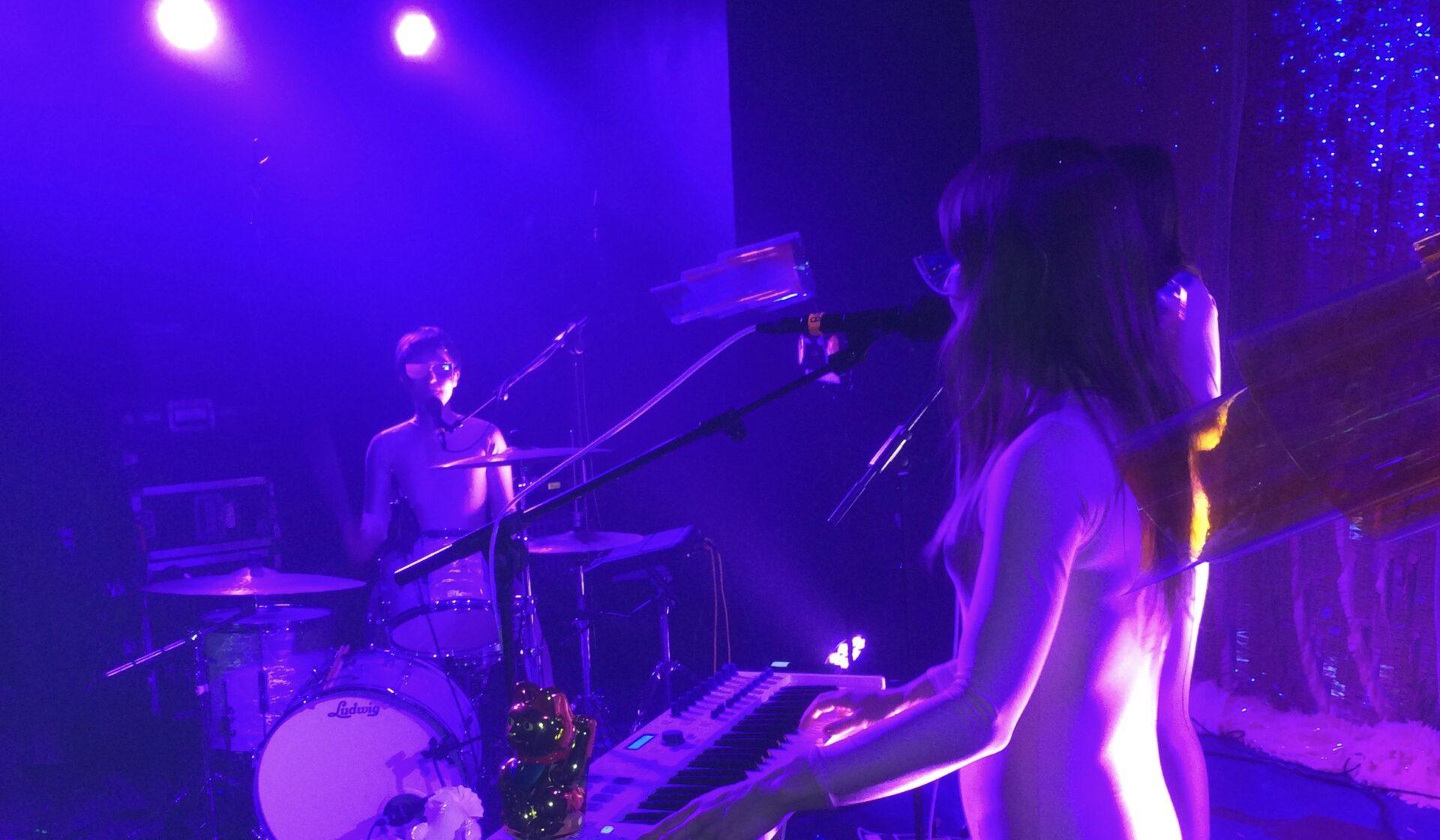 News just in: Stealing Sheep have got their giant, pink inflatable sheep back. It went missing at last night’s Birmingham show, and whatever else happened it definitely wasn’t stolen. So grow up and stop sniggering about the irony of it all. Someone must simply have mistaken it for their jacket, or something – an honest mistake that any one of us could have made. In any case, after an appeal on 6 Music this afternoon, the culprit, realising the gravity of their actions, made a dash down the M5 to Cardiff to reunite the ovine blimp with its owners. So that turned out nice again, even if it robbed your unworthy correspondent of some very obvious gags. You gotta be jokin’ me, right?

Anyhow, it’s the last night of what, by all accounts, has been a triumphant tour, and Clwb is duly packed out for Stealing Sheep. The new album, Big Wows, saw them discard the last of their pastoral, Krautrock influences in favour of ecstatic synth-pop. They’ve also shifted a gear or two in terms of their stage show – slither-suits, glitter, futuristic shades, lasers and a shag-pile curtain of LED lights at the back of the stage. They look and sound like Kraftwerk’s hedonistic apprentices, and with their instinctive grasp of that elusive prey we call the pop song, there’s more than a dash of something Beatles-ish in the mix. There’s a similar knack of bouncing simple, playful hooks off one another, and that same smart, psychedelic wink.

The dream pop of ‘Show Love’ and ‘Why Haven’t I?’ stand out in the early half of the set. Emily Lansley’s clubby, Whigfield-esque bass-lines bleed into ambitious arrangements of pithy, nursery-rhyme choruses, steelpans and looping arpeggios. “We’ll find each other in the dark / Find trouble in the dark”, they sing on ‘Breathe’ and the tonight’s crowd seem to be having no difficulty with that. An audience member unleashes the band’s replacement inflatable sheep into the audience. This newest member of the band spends the next hour having about the most fun it’s possible to imagine an inflatable sheep ever gets to have. The official tour sheep is kept tucked away at the back of the stage, no doubt chastened after its misadventures in Brum, while its stunt double is tossed hither and yon about the crowd.

The album’s title track showcases all the things that make this band such a great proposition. The world-weary intro “Is this the big, big, big wows? / Is this what it’s all about? / Just big wows?” Is delivered with a big cheesy grin tonight, and there’s an unfamiliar passion in Luciana Mercer’s vocals. Right now, the wows are more than enough. It builds, falls away, then builds back up. “Come on / come on / come on / come on / come on / come on” gets higher and higher, before dropping a big, sugary dollop of trance-floor goodness all over us. It’s hardly recognisable from the version on the album. Elsewhere Rebecca Hawley’s big chorus on ‘True Colours’ splits your ears while keeping something of the pastoral about it, as though ‘The Lark Ascending’ had got hold of a PA system. 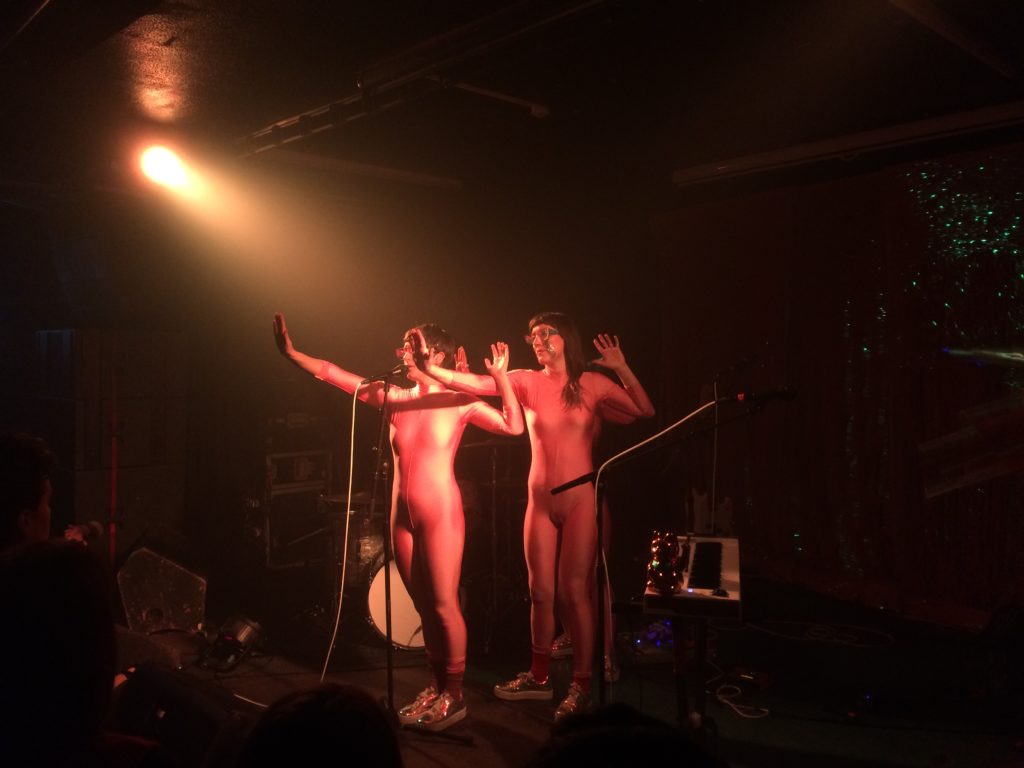 This sense of a band constantly evolving continues as they dig into their back catalogue. Tunes like ‘Not Real’ and ‘Deadlock’ weren’t ever exactly a million miles from where they are now, but they’ve found something new in them. ‘Deadlock’ channels the itchy-suited, eighties, wine-bar melodrama of Sparks, and ‘Not Real’ segues audaciously into ‘Last Night a DJ Saved My Life’. But when a song ‘Genevieve’ gets the Big Wows treatment and comes up shining, you’ve got to hand it to them – Stealing Sheep really are a class act.

They finish on ‘Shut Eye’, and such is the reaction from the crowd, and the pure immediacy and sassiness of the melody, that I find myself racking my brain to place it. This has to be a cover, right? Sugababes? Rihanna? Queen Bey herself? Good grief, Bond, you monumental failure of a music writer, get a grip. Then it hits me – last time I heard this it was a folk song. This band have pulled off an incredible transformation over the last few years, yet it’s somehow always been implicit. Behind the gimmicky sunglasses and callisthenic dance routines, they’ve got something built on some solid foundations.

There’s a photo opportunity for the audience before they go, then they’re off, all big smiles, looking like they know what a great show they just put on. Fun, intelligent, unpredictable – Big Wows indeed.