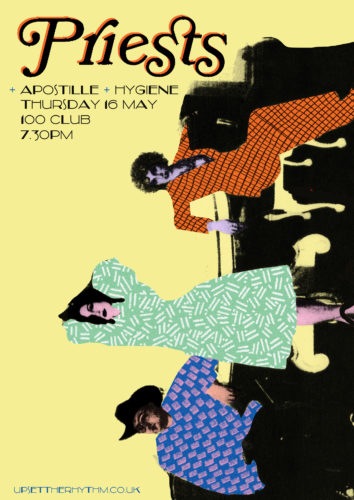 Over the past two years, Washington D.C’s Priests have quickly established themselves as one of the most vital bands of this dwindling decade. 2017’s Nothing Feels Natural remains an incredible post-punk call to arms, while this year’s The Seduction of Kansas saw the trio (having recently lost bassist Taylor Mulitz to concentrate on Flasher) move into a more challenging, ’80s new-wave direction. Hailing from D.C, Priests feel like the best example of that city’s proudly D.I.Y and fiercely political punk scene at this current moment in time, an idea their live shows only look to maintain.

Tonight’s support is Glasgow’s excellent Apostille, who has played the entire UK run of this tour. Some may know Apostille (or Michael Kasparis) for his work running Night School Records or one of his many previous bands and guises, such as the excellent noise-punk band Anxiety. Last year’s Choose Life was a brilliantly constructed slice of electro-pop, with a similar ’80s throwback vibe to tonight’s headliners. However, for anyone who knows Kasparis’s punk background, one knows not to expect a straight-up rendition of his work.

And indeed, this is a noisy, limbs-flailing, sarcastic, chaotic interpretation of his own work. It is possible to make out the vocal lines and lyrics of tracks such as ‘Feel Bad’ or ‘Fly With the Dolphin’, however, Kasparis is more interested in creating a mood which is at once both abrasive and danceable. While some of the London crowd initially seem at a loss at what to make of this manic-injected Glaswegian, Kasparis eventually wins over the crowd to leave on a resounding high note (and not just his screaming, reverbed vocals).

Shortly after Priests hit the stage all PVC, Hawaiian shirts and zoot suits, with singer Katie Alice Greer’s trenchcoat, hair and makeup giving her a “glam granny” look. Looks are deceiving, however, as the band tear into Nothing Feels Natural favourite ‘Pink White House’ sending the crowd into a frenzy. A couple of songs later, the D.C quartet (joined by a highly composed touring bassist Alexandra Tyson) break into their, so far, career-defining hit ‘Jj’ receiving a strong reaction from the gathered crowd.

The rest of the set – bar one fun moment we’ll come to shortly – is dedicated to Priests’ latest album The Seduction of Kansas. The album has proved difficult for some listeners, proving to be not as immediate as Nothing Feels Natural due in part to John Congleton’s throwback production and subtler songs. Live, however, Priests always promise to put on a great show, and thankfully, their latest material translates excellently to a live setting. ‘Good Time Charlie’ and set closer ‘Jesus Son’ for instance rip through the room with the tremendous force it is expected to have.

Part of The Seduction of Kansas’s struggle was the patchwork nature in which it was composed. However, drummer Daniele Daniele’s songs ‘I’m Clean’ and ’68 Screen’ work perfectly here, giving the crowd and band a breather while simultaneously freshening up the performance for a few moments. On return from her brief stint on the drums, Greer and co blast into a cover of Danzig’s ‘Mother’ – for the first time ever – re-appropriating it as a protest song for women’s reproductive rights. It’s a fun moment, but the political repurposing of the message gives it an added and unexpected weight.

Ironically, the only track that doesn’t really come off in this set is lead-single and title track of latest album The Seduction of Kansas. It is an intentionally awkward song with a surprise left hook to catch you off guard, but something here doesn’t quite gel on this performance. Equally, it’s a shame to not get the beloved title track of previous album Nothing Feels Natural, however, this is an otherwise excellent performance from the D.C post-punks, only furthering the idea that Priests are indeed the real deal.