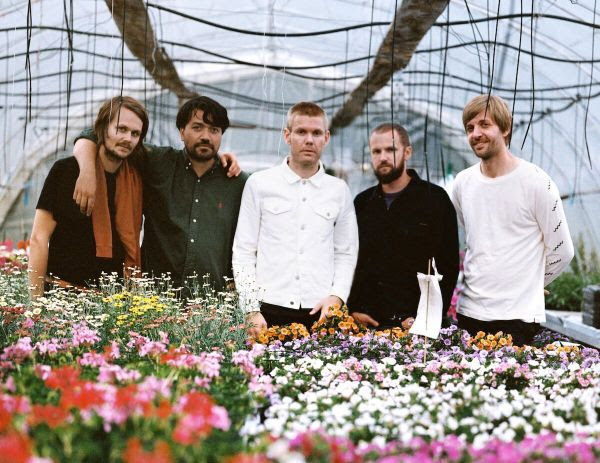 Their fantastic recent single ‘Two Diamonds’ is like spying a flash of hope in a grey world. Woven with rushing euphoric melodies and a tapestry of rolling drums and epic psych tinged guitars.

Even though their loud live shows were a crucial influence on the record, they also found another guiding star in one of their all-time favourite records, as Ishak explains: “We thought: what would Pet Sounds by the Beach Boys sound like if it was really loud and distorted? Of course, that’s not what the album sounds like, but that was the dream; the inspiration.”

Lyrically the record is an examination of a variety of issues from the viewpoints of different characters, the idea being that each song is a snapshot of a bigger picture; “You can find your own meaning,” hints Ishak, “but it’s not fictional—all the events in the lyrics are pretty real and very candid, but without telling the whole story.”

The main riff is something I’ve had for a long time but I couldn’t make a full song out of it. I guess I managed to find all the parts in the end. It’s a mouthful and maybe a bit too much to have as a first song, but we stuck with it nonetheless. The album’s theme is mostly centered around one person, who’s a good friend of mine.

This was the first song we finished and in many ways set the tone for the rest of the album. It was pretty clear that the whole thing would be louder, longer and less polished than our previous record and more like our early records in terms of vibe. The song kind of reminds me of Television, a band I was ignorant about for a long time, so once we had this song going I started listening to them quite a bit and let that lead us to a finished song. It’s a fun song to play live.

This one became a favourite in the band pretty fast, but we struggled to find the right way to do it. In the beginning it was faster, uptempo and it just sounded kind of shallow.  After playing bass with The Ruby Suns for a bit, where we covered ‘Cherry…’ by the Cocteau Twins, I got inspired to try to make Closer more like a loud late 80’s slow burning piece. Once the song found its shape I thought Jon Auer of The Posies/Big Star would like it and that Sophia from Night Flowers would sound great on it, so I asked them and they both said yes to adding vocals. It was a really great process and we are really happy with how it turned out.

This song was actually a god bit longer, but it’s still a very good document of our few days in the big loud room at Folkets Hus at Lilleaker, where we recorded a lot of the album live. We had our friend Fridtjof do monitors in the room with us and Mads downstairs in the control room. We had our amps turned up really loud, so everything bled into the drum microphones. This song is about following someone going through a rough time, I guess, and following that person trying to find some peace—how it becomes a part of your life too, and that it’s worth it. It’s okay.

I wrote this in the morning on the way out to my studio, and just recorded it on my phone and sent it out to everyone, and we recorded it as a band the next day. It’s about a certain night in Malaysia, where my father is from, where this old man tried to convert us. The song is about the drive back at night. I was pretty young but I remember that night clearly.

We tried this one in many shapes and forms but ended up using the demo as a basis. The demo was kind of a pastiche of the band Dungen, who we love, but sound very different from us.

We built on that and felt it worked with the song’s lyrics about a person I know who bought a sailboat out of the blue and just vanished.

This song is what I remember and hope one of our first songs sounded like, or what we wanted to make ages ago when we recorded a song, just a demo really. We moved on from it, forgot about it and tried to find the tapes for it to put as a B side on a reissue of our first record, but still haven’t found it. Anyways, I started playing it at home not thinking too much about it and just suggested we try play it again and it felt good. We reworked it a bit, but the main verse and chorus is the same.

This is the last song we recorded in that huge room, and by then everything had gotten out-of-hand loud, so all the drums and guitars were bleeding into each other’s microphones, in a good way. That’s why it has that Wall of Sound feel. It has different sections and is really long but still feels compact and not too “thought through”. The lyrics might be the most personal or direct on the album, without really giving the story away. There has to be room for your own interpretation, to get the listener’s imagination going. For me, it’s not that I want people to know what has happened, or who the person is, I just want the music and the words chosen to produce certain images—a vibe for the listener, an understanding of the undercurrent in the song. My favourite moment on the record is when the octave guitar comes in on the left side in the last instrumental bit. I didn’t play that, but yeah, that Wall of Sound is my favourite memory of all our shows ever and finally we captured it on record.