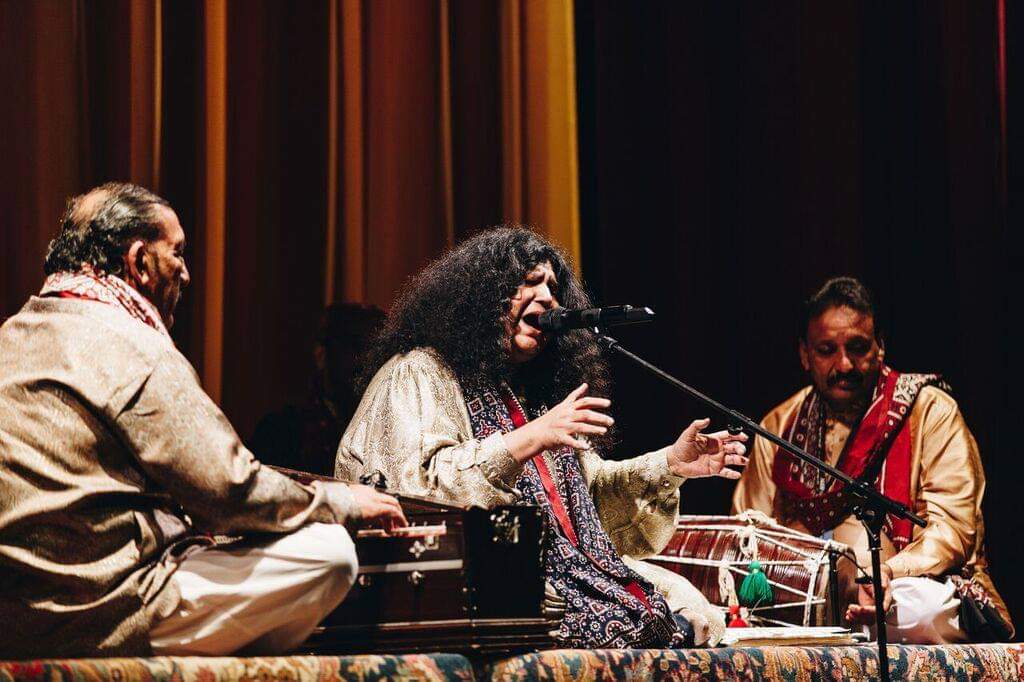 I’d bet my house and car that this is the first time a Sufi singer has been reviewed in GIITTV and I had no idea at all what to expect. Not just any old Sufi singer, mind you, only Abida Parveen, “The Queen of Sufi Music”, the “Living Legend of Pakistan” and a “Global Mystic Sufi Ambassador with the power to induce hysteria in her audience.” Oh, and she’s recorded a Pepsi TV advert soundtrack. In the Coke Studios, in Pakistan, I kid you not.

By way of a brief explanation, Sufi music is the devotional music of the Sufis, “the inward dimension of Islam”, and characterised by ritual practices, doctrines and institutions. Historically, Sufis have often belonged to different ṭuruq or “orders” – congregations formed around a grand master referred to as a wali who traces a direct chain of successive teachers back to the Prophet Muhammad.  No, I didn’t know either.

It has crossed genres as well. Madonna, on her 1994 record ‘Bedtime Stories’, sings a song, ‘Bedtime Story’, that discusses achieving a high consciousness level. The video for the song shows an ecstatic Sufi ritual with many dancing dervishes, and other Sufi elements.  In her 1998 song ‘Bittersweet’, she recites the Sufi poet’s Rumi’s poem by the same name. In her 2001 Drowned World Tour, Madonna sang the song ‘Secret’ showing rituals from many religions, including a Sufi dance.

This was going to be something different. A bit like Beyoncé playing the Rawalpindi International Festival.

Abida Parveen played the last-but-two Manchester International Festival in 2013, at the Bridgewater Hall, packing it out as she did here tonight. She rarely ventures out of Pakistan and the audience seemed to have arrived not just from the local Asian community but from the rest of the UK, from Europe and in some cases even further.

The venue was smaller this time but the Lyric, which features drama as well as music, has a huge stage which was able to accommodate another ‘first’ for the MIF, the pairing of Abida Parveen with the Kathak (South Asian classical) dancer, Nahid Siddiqi, regarded as one of the finest in the world.

Nahid Siddiqi was the warm-up act, with a 15-minute solo spot to pre-recorded music. To be honest I didn’t quite get it. Kathak dancing is extremely graceful and I’ve never before seen anyone shuffle across a stage on their toes then back again in a Moonwalk and when she waltzed across it in a series of circles you could believe she was on castors like a supermarket shopping trolley. But it isn’t balletic; there is no sudden explosion of movement. Rather it is interpretative, mainly through the hands and facial expressions like the dancing you’d find on Bali.

It was when she returned at the end of the set to dance to one of Abida Parveen’s songs that the value of that interpretation became clearer. 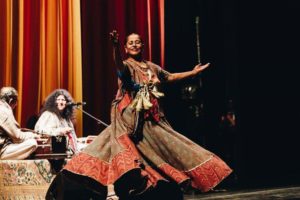 Abida Parveen sings in Urdu, Sindhi, Saraiki, and Punjabi and not being familiar with any of those languages I didn’t understand a word. But “Music should rise from the heart and go straight to the soul” she says and that is exactly what happened as the audience became more and more animated just as any western audience would in similar circumstances.

The stage setting for Abida Parveen wasn’t something a western audience would recognise either. As the lights dimmed what looked like a superking-sized bed was wheeled on, topped with a magic carpet. It could have been a scene change from an Alan Ayckbourn play at the Oldham Coliseum.

The backing band consisted of two drummers playing a dhol (double-headed drum) and congas respectively and a keyboards man working a beautiful ornate harmonium that must be worth a fortune. All four squatted on the carpet and stayed there for almost two hours. It’s hardly surprising they could barely walk when they finally stood up again.

The songs themselves aren’t three minute efforts written with Spotify in mind. Again if I can use a western analogy many of them are more like concept albums or half-albums of 20 minutes such as those the 1970’s prog rockers recorded. The same themes, and words, seem to appear in different songs. One sounded like “oggi, oggi, oggi” but there was no “oi, oi, oi” in response. “Hare” also cropped up frequently but I can’t make a justifiable connection to ‘Hare Krishna’, which seems to have different roots altogether.

However, you don’t have to understand any of the words to appreciate the power of Abida Parveen’s vocals and her energy. Singing in a contralto voice she generates enormous force and when the tempo is ramped up, dervish-like, as it is three or four times in every song, it becomes evident she is living it as much as singing it. I can only assume that these love songs, which is essentially what they are, become extremely spiritual at those moments.

There are no middle-eights in Sufi music and no-one is going to go off at a tangent into an instrumental solo but at times the beat becomes tachycardic and the audience joins in, clapping loudly in 4/4 while what is being played is in 23/11 or something equally bizarre. And the sight of the harmonium player doing fast runs up and down his keyboard like Rick Wakeman or Keith Emerson, while pumping the bellows at the back with his other hand for all he’s worth is something I won’t forget in a hurry.

As the set came to a conclusion the intensity heightened even further. The final song, which was the equivalent of rap played to a heavy rock beat in western culture, had the audience eating out of her hand and it became evident that “the power to induce hysteria in her audience” isn’t far off the mark. By now she was a female Meatloaf, almost possessed, and her voice so formidable that she could call the Rochdale faithful to prayer without any mechanical aid, from Oldham. “I love you Abida”, could be heard all over the auditorium and one individual had to be restrained by security from storming the stage on five or six occasions.

It is rare that an opportunity to see and hear the dance and music of totally different cultures like this arises. I was a little uncertain about what I might find but I would recommend this experience to anyone.

And kudos to the MIF for bringing this audio-visual feast to the UK, not just Manchester.