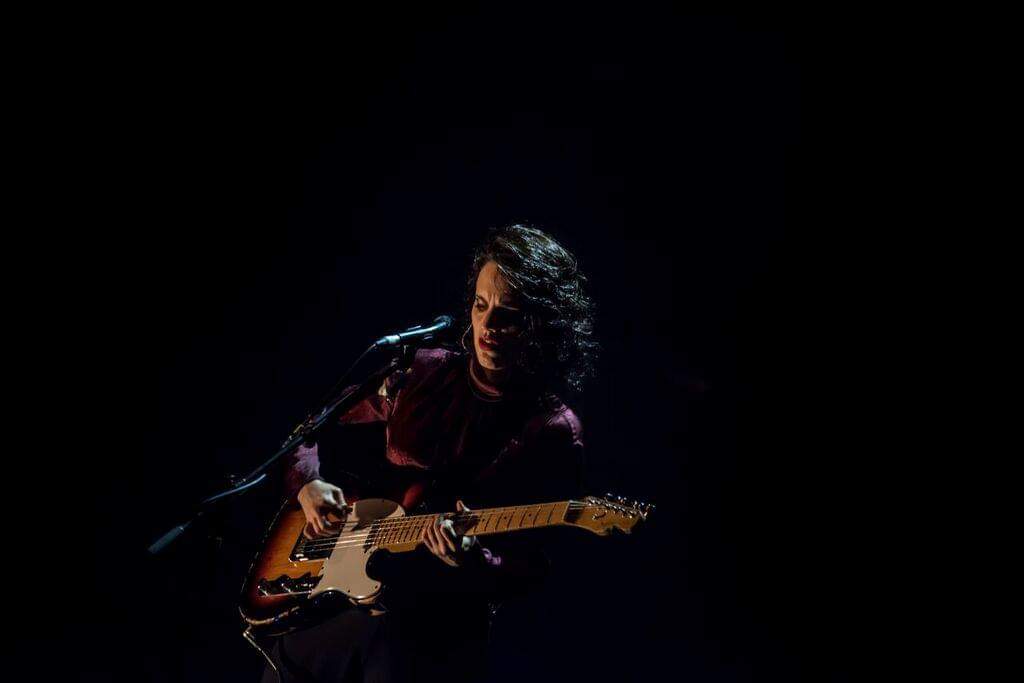 Oh what a circus, oh what a show. David Lynch has come to town. Actually he hasn’t, he’s still reclusing in the Hollywood Hills.

But he’s here in spirit, taking over Manchester’s premier arts venue, Home with his largest UK exhibition of visual art to date, and film screenings, for the duration of the Manchester International Festival (until 21 July) and more importantly, having curated a musical event featuring three very Lynchian characters – Douglas Dare, Chrysta Bell and the electrifying Anna Calvi with a rare and intimate solo performance, all of them on the same night, on the same stage.

You could imagine any of them playing at least a cameo role in ‘Twin Peaks’ and the Lynch cognoscenti will know that Chrysta Bell already has appeared in it, in the 2017 revival, as FBI agent Tammy Preston.

That stage was Theatre 1 at Home, a neat 500-seat venue that is about as intimate as you can get for a series of performances of this stature. And the setting was key to the standard of those performances with acoustics that rate amongst the best I’ve ever experienced and superb stage lighting that ranged from candlelight to deep blood red, to backlit ultraviolet to multi-spot overhead blue; always embellishing the artistry and never once detracting from the artists’ repertoire.

I used to buy ice cream from the Chrysta Bell van when I was a kid but the Manc-Italian who peered down at me then couldn’t be more different from the Texan vision that stepped on stage as Mistress of Ceremonies tonight. David Lynch, who has written and recorded two albums with her, famously described Bell, after first meeting her, as “like an alien, the most beautiful alien ever”. 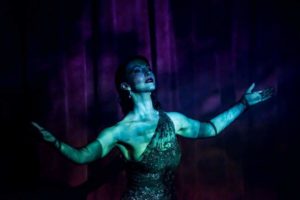 Her appearance is certainly striking. With big almond eyes, the longest legs you’ve seen on someone who’s about 5’ 9”, opaque skin, a hugely expressive face and the neck and shoulders build of a weightlifter without any weight, she could be Mr Spock’s estranged wife, arriving directly from Vulcan. To an ethereal background soundtrack she intoned that tonight, “anything can happen”, including, strangely “humiliation”. The anticipation was palpable.

First up was Douglas Dare. I wasn’t familiar with him and his scant Wiki entry doesn’t do him justice. I was intrigued to learn he has a drag persona under the pseudonym of ‘Luna Landing’ which wrong-footed me. I was expecting some sort of cabaret act and when he turned up wearing a Butlins Redcoat jacket that suspicion was heightened. 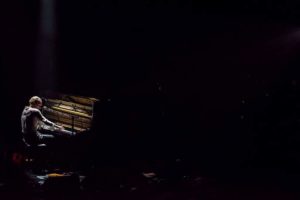 Nothing could be further from the truth. Playing piano, guitar and autoharp the London-based Dare offered up a beautifully measured show of reflective ballads including one song performed live for the first time and supported by some wonderfully constructed piano work in particular. Again, the stage setting helped enormously, the entire area being open to view, dotted with randomly strewn instruments for the artists coming later and creating the effect of the interior of a big log cabin.

I can’t easily pigeonhole Douglas. His on-stage persona is so relaxed, joking about wearing red lipstick “for David” and knowing he can get away with it, but it contrasts dramatically with the gravitas of his lyrics. Without doubt an artist who merits a stage such as this, where every note and every word is appreciated and absorbed in total silence. Regrettably, his show wasn’t long enough.

After a strange equipment change which took place in plain view rather than behind the curtain, thus dissipating the atmosphere that Dare had built up, Chrysta Bell returned to the stage. Again, I’m hard pressed to compare her to anyone else, apart from perhaps Annie Clark (St Vincent) – another Texan – but then only physically. The Great Man had gone out of way to identify three unique artists for this gig.

She has a huge stage presence but it is her voice which really stands out. I’m certain she must have had some operatic training because she is fully capable of imitating that art form in her more surreal works. At the same time she can belt out a rocker like ‘Swing with me’, co-written with Lynch, and it might be a young Elkie Brooks up there.

Staging effects again played an important part in her show, at one moment it was entirely a moody, swirling red, the effect creeping over into the front seats. And the support she had from her touring guitarists Jon Sanchez and Chris Smart (bass) was impeccable, especially so as the percussion was provided by way of a backing track.

A 30-minute intermission was welcome (the seats are rather cramped) but too long in the sense that each of these two artists could perhaps fitted in another song had it been 20 minutes.

Anna Calvi had come ‘home’ in a way. Legend has it she was discovered while playing a show in Manchester by Bill Ryder-Jones. She strode nonchalantly on stage from the wings (so far away, she could have caught a tram) as only she can and barely said a word throughout her 60-minute performance, again as only she can. For the only time during the evening the lighting failed the artist as she struck up traditional instrumental show-opener ‘Rider to the Sea’ by candlelight, barely visible even from 20 yards. The fact she was struggling was made clear when her fast run along the fret board towards the end was curtailed. Mercifully, her plea for more lighting was acknowledged and she was quickly illuminated by spots.

Calvi has been performing her ‘Hunter’ album tour for almost a year now (and quickly returns to the Northwest in a few days for the Bluedot Festival). I had pondered how she would reconcile it with the MIF’s requirement for something new, or at least a little bit different.

How she did it was by presenting a show so intimate it might have been in her living room, most of the songs slowed down a little and less dramatic than with her band, without any of her guitar-shredding gymnastics, but losing none of her inherent poise and power whatsoever.

The set was ‘Hunter’– like in that it featured songs either from that album or the eponymous first one, and none from ‘One Breath’ although most of those require arrangements that would not have been possible in this solo guise. On the other hand there is a growing suspicion that album represents a time of her life she’d rather forget.

It was also ordered in the same way as the ‘Hunter’ tour with the emphasis on her personal life and relationships, of which she came clean in the run-up to the release of the album. ‘As a Man’, ‘I’ll be your man’, ‘First we kiss’ and ‘Suzanne and I’ all featured in the first half.

We also heard versions of songs that I doubted even Anna Calvi would dare to perform to the accompaniment only of her battered Telecaster, beginning with the lush ‘Swimming Pool’ and then, towards the end of the set, a trio of ‘Hunter’ blockbusters, ‘Indies or Paradise’, ‘Wish’ and ‘Don’t beat the girl out of my boy’. Each was symbolic in its own way of what Calvi represents; the guitar solo of ‘Indies or Paradise’, the vocal intensity and contradiction of ‘Wish’ (how I wish Chrysta Bell could have stepped up to support her with the operatic female voice in that song) and the breathtaking scream of ‘Don’t beat the girl out of my boy’, which was worth the entrance fee on its own.

I’d given some thought as to what she might close the show with. I suppose many in the audience were hoping for ‘Love won’t be leaving’- rarely played now but with that guitar solo. Again, that was unlikely because of the arrangement, which requires percussive backing. In the event she returned to sing the highly under-rated ‘Eden’ from ‘Hunter’, a beautiful song which tailed off into a mesmerising whisper at the end.

And then, what I’d crossed my fingers for since I last saw her perform it at the Albert Hall five years ago. ‘Jezebel’ again is rarely played live these days. But what a fitting way to end a show like this, with a song she’s come to own every bit as much as Frankie Lane and Edith Piaf. That final extended note, as always, beggared belief.

Pardon me for repeating it yet again but Calvi is for me the #1 artist in the UK right now and this show merely reinforced that view.

The other two aren’t bad, either. Well done, David Lynch and the MIF.