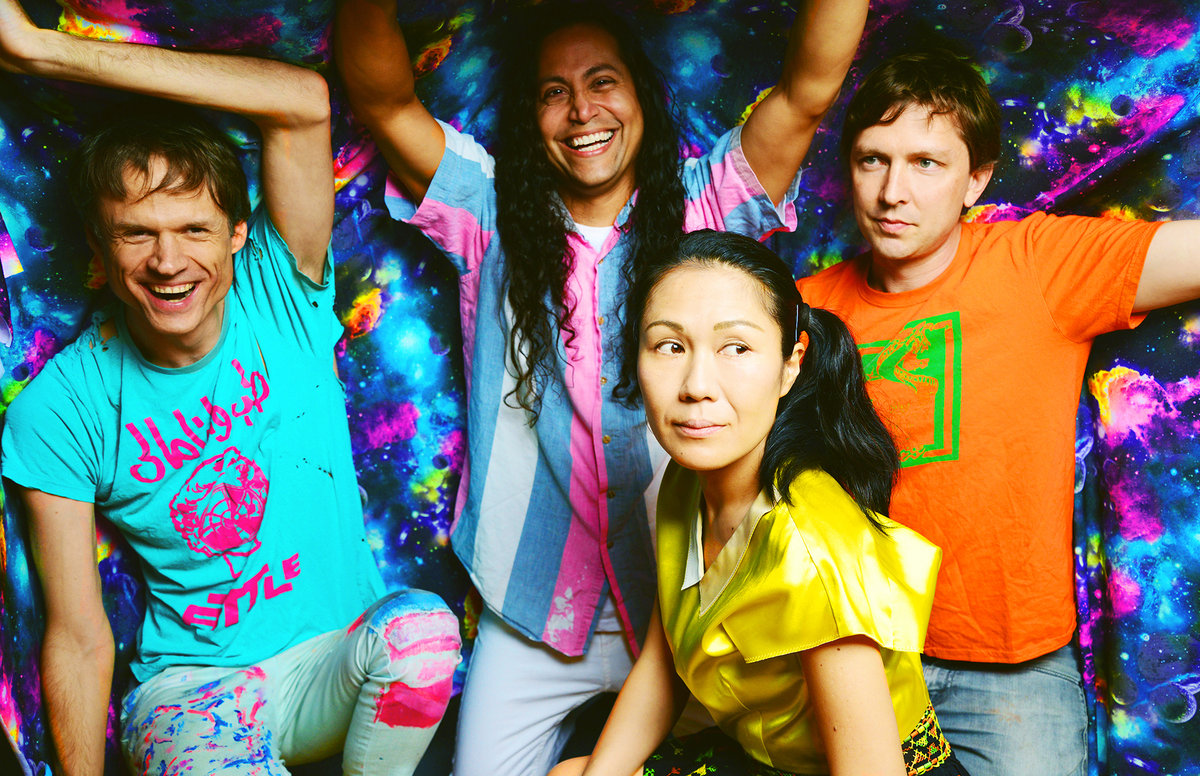 Celebrating their 25th anniversary this year, the incomparable San Francisco noise-pop quartet Deerhoof are still going strong. The band are fourteen albums deep as of 2017’s Mountain Moves and remain an unbridled, unpredictable joy after all this time. While trying to define them is pointless, there is always a guarantee for an entertaining show and tonight’s performance at the beautiful EarTH theatre promises to be the same.

Before the legendary headliners, however, is London’s Trash Kit who are on Upset the Rhythm who are also promoting tonight’s show. Trash Kit’s latest album, Horizon, released earlier this year, is an underrated highlight of 2019 so far as lead guitarist/vocalist Rachel Aggs (also of Shopping and Sacred Paws) continues to hone her craft. Aggs has always been an engaging performer and inspiring songwriter, but everything she touches lately seems to turn to gold across her three projects.

Tonight, the London trio show why they are being spoken so highly of. While proceedings kick-off to an understated start – opener ‘Coasting’ is played quietly without so much of an announcement leading to much of the crowd not realising the band have started – the band quickly pick things up. Utilising the more spacious surroundings than they are used to, Aggs invites six female backing vocalists to help add to the energy and sound being laid down by Rachel Horwood (drums, vocals) and Gill Partington’s (bass) delicate rhythms. It is a smart move as it leads to a joyous celebration of their afro-beat influenced post-punk for the rest of the set, proving why they are well worth the hype.

Whereas Trash Kit’s rhythms are carefully considered and measured, Deerhoof in comparison are far more erratic. Deerhoof shows always contain an element of unpredictability and high energy, often depending on founding member and drummer Greg Saunier. Tonight he is in particularly brilliant form, meaning we get an especially noisy set. Saunier’s playing is both impressive and simultaneously, at times, distracting. There are a few moments where the band are locked into a groove before Saunier moves off into a jazzy direction to disrupt matters. While this is part of the band’s signature sound, the mix has bassist and singer Satomi Matsuzaki’s levels too low, meaning as the one often keeping the beat she is sonically overwhelmed by Saunier’s digressions.

This minor complaint aside, however, Deerhoof still put on one hell of an entertaining show. Saunier’s awkward manner addressing the crowd between songs is hilariously at odds with the rest of the set, but there is a certain charm to it. Tracks such as ‘I Will Survive Spite’ and ‘Exit Only’ are especially impressive showing off the band’s noisier chops. However, the band are also happy to show off their poppier moments, such as ‘We Do Parties’ and ‘Bad Kids to the Front’. Deerhoof even dive deep into their back catalogue with ‘Polly Bee’ from their 1997 debut The Man, the King, the Girl. The best is saved for last during the encore, where the San Franciscans break out ‘Twin Killers’ and their classic, ‘The Perfect Me‘ to cap off an excellent night of music.