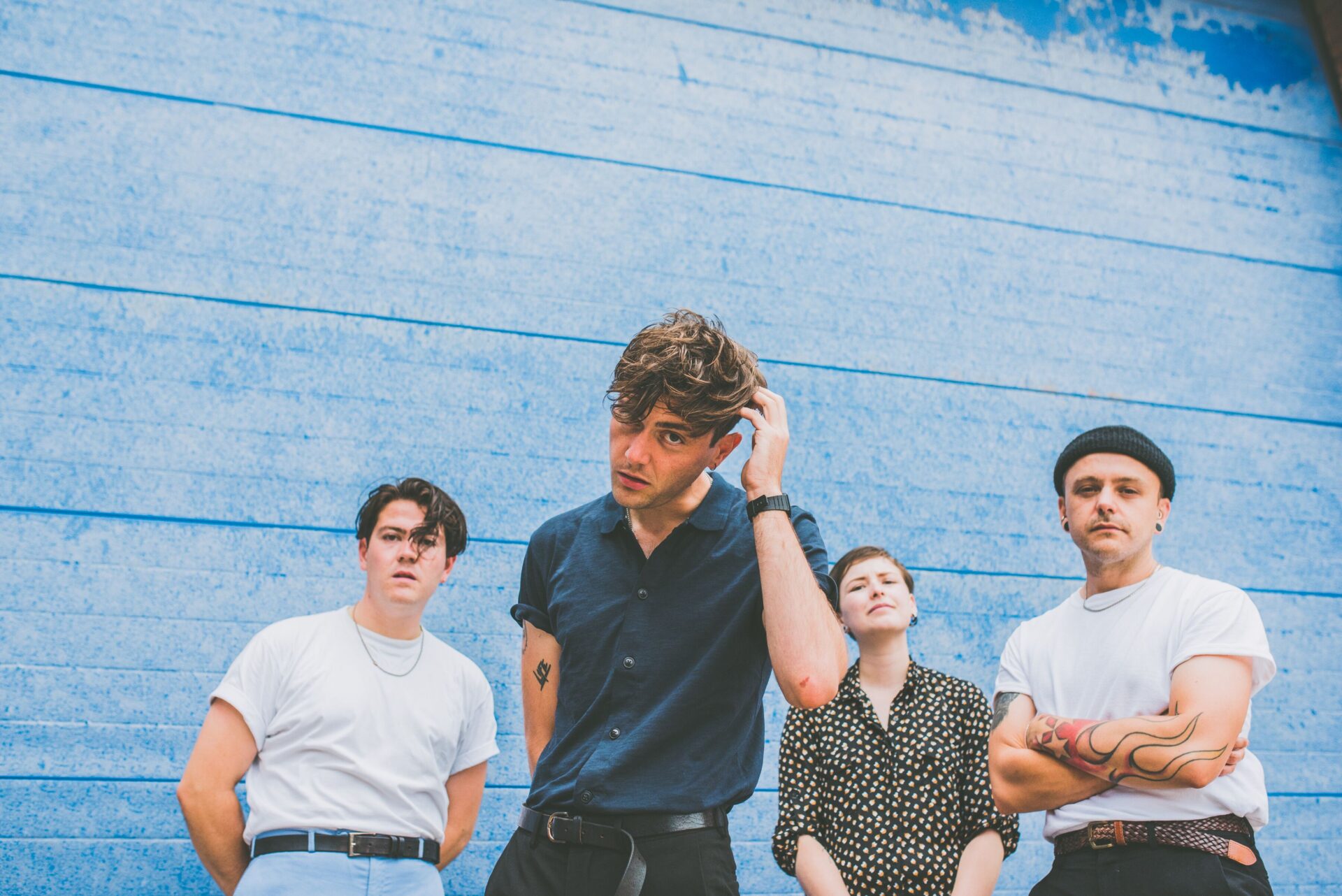 Hull’s finest band in, well, EVER, return to the public eye with their barnstorming new album when LIFE release A Picture Of Good Health on 20th September. I caught up with Mez Sanders-Green, one of the truly great frontmen of recent times, for a chat…

God Is In The TV: Hi Mez, you must be very proud of the new record, it’s a belter.

Mez Sanders-Green: Yes mate, I probably felt it about the first album too, but this one here, it feels real good. I’m real proud of it.

I mean, Popular Music was a fantastically political, angry beast of an album, whilst at the same time being angry and fun. If anything, A Picture Of Good Health is even MORE angry, yet, at the same time, euphoric…

Mez: Yeah, I think that’s what we tried to get across, ’cause this one’s like, we’ve known this one for six months, we’ve been touring it as well, and we recorded it as a band over a month, in London, whereas, I guess, the first one, it was angry but it was almost like a collage that we recorded here, there and everywhere. This one was just one intense month and a lot of the lyrics are also quite personal to me as well.

It feels even more energetic…

Mez: Yeah, I think, especially with Lydia coming in on bass, it’s given us more of a dance…I mean a New York dance…kind of feel, and that’s given it a lot of energy. Within that month that we recorded, in terms of songwriting, we ALL contributed a lot and everyone brought their own energy, so that was great.

Has your life changed much in between the two albums?

Mez: Well, up until Friday, I was still working full time at The Warren, so I was still doing all my youth work, but as of Friday, I’ve left. So this album marked a departure from us doing our full time jobs, and really signified us becoming a full band, if you like.

Which of your songs are you most proud of?

Mez: Me, personally, I like ‘Bum Hour‘- I just love the dynamic on that one, and ‘Half Pint Fatherhood‘ because it has that kind of ‘old school’ feel to it. And I really like the ‘euphoricness’ of ‘Never Love Again‘ – stuff like that is another avenue for us and I think those are the three that stand out, for me, anyway.

In ‘Niceties‘, the line “It’s not about yourself, stop hating yourself” sounds like it could have come from an IDLES song. Obviously they’re mates of yours. Would you say that playing gigs so frequently with them has rubbed off on you to some extent?

Mez: Yeah. I would say probably. I mean we all share the same outlook on life, so that song is very much about mental health, you know, “stop hating yourself – we’ve all got our own demons“. When we were recording that, actually, the bassline was so intense, and Lydia was struggling with that particular line, so much so that she kind of left that session in tears, but in a way that was kind of like “Fuck! Is this powerful or WHAT?”

I love the fact that you still shout “Fuck the Tories” and “Fuck Brexit!” at your gigs, because I hold the same values as you. I can’t help noticing though that, the more obvious it becomes that the Tories are evil bastards and that Brexit is the dumbest idea EVER, the more it falls on deaf ears…

Mez: Yeah I know. I mean it’s like, we’ve been talking about it for so long now. Obviously we were talking a lot about the situation of the world on the first album, so on this one I guess we tried to turn the microscope on ourselves a bit more in terms of body of lyrical content. But obviously, live, we’re still so passionate about what’s going on – and really, nobody has a CLUE what’s going on – that we can’t just ‘not talk about it’. It’s so frustrating and it feels to me like what we’re witnessing is the biggest act of suicide ever, you know what I mean? It’s such a massive act of self harm. I’m just dumbfounded. I mean, I understand WHY we’ve got to this point, but everyone’s just been totally sold a lie. Politics now is just about career advancement – the human aspect has been totally taken away from it.

Couldn’t agree more. On a happier note, I actually think A Picture Of Good Health is even BETTER than Popular Music. I remember saying to you last time we spoke that I was struggling to see how you could possibly achieve such a thing…

Mez: Well we really sort of embraced the challenge of writing it, and we were so proud of the first one that we just thought “Well this one is just going to have to be better!” so we tried to make the music more emphatic, a lot wider, even more alternative in a way. And because we’d made the music even more energetic, expansive and layered, we thought the lyrics should be more personal, so while we’ve kind of made it more accessible in terms of the music, because it’s SO personal, it still ticks both boxes.

How has the City Of Culture thing helped Hull, do you think?

Mez: Well, it’s put us on the map, literally – we’re even on the weather on the BBC now! For me though, we’ve always been proud of this place, this city, and the community ethic has always been strong, whether that be bands, art, literature, poets…we’ve always had rich heritage and we’re all very proud of it. I think the city of culture helped shine a light on us for everybody else to see, but everyone here already knew we had it anyway!

I love Hull actually. I haven’t been for ages, but my mate went to Uni there and he threw the wildest parties.

Mez: Oh we know all about the parties up here! You’ll have to come back up again, we’ll go for a pint!

And who am I to refuse such an offer? A pint with the frontman of one of the greatest bands presently on the circuit. Noted. Although to be frank, I’m pissed after about two pints these days. Best not mention that…

LIFE tour the UK from October through to early 2020. Details here: https://www.ents24.com/uk/tour-dates/life