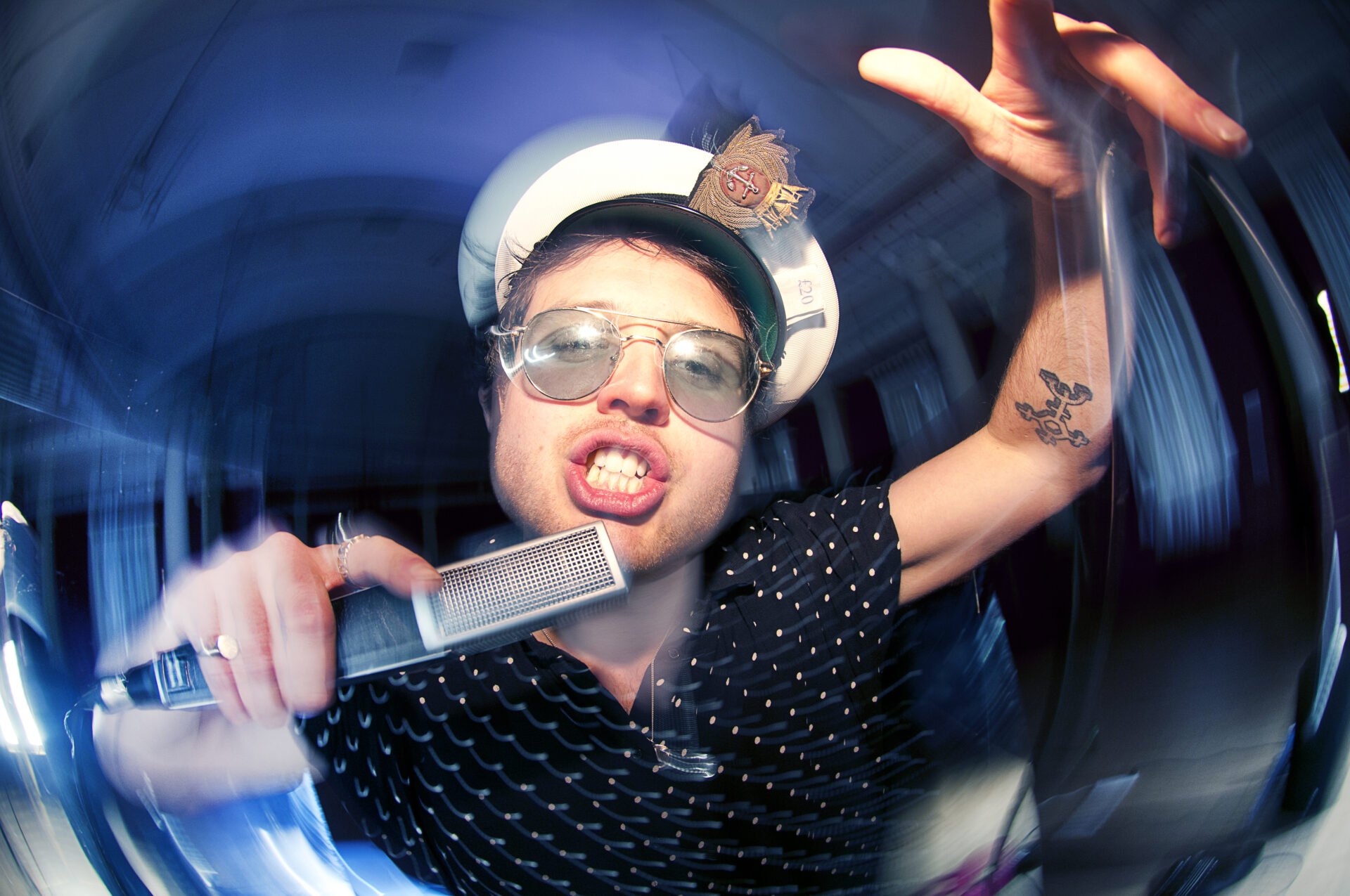 With the rise of Sam Fender and plenty of other great guitar-driven bands/artists, The North East music scene has never been in better health. Next up to show off their talent is Jango Flash, a North Shields based musician/producer who creates the type of widescreen, psych-tinged rock music that begs to be heard…loud. His latest release ‘Acting On The Telephone’ (aired earlier in the year to much acclaim) has been given some dizzying new visuals in which the artist dances around a spinning camera, donning a sailor hat and belting out the anthemic tune along with his band members. We caught up with the man behind the pseudonym to find out more about his music and what the future has in store…

I’m good man, just got back from a V.I.P Q&A with a Psychic Medium called John Edward, he was absolutely astounding. I discovered today that he did a private reading for Kim Kardashian, and apparently (contrary to popular opinion), she’s the most grounded and down to earth person ever. You learn something new every day!

What is the last thing you ate?

What is the last movie you watched?

I re-watched ‘Good Time’ with my girlfriend because she’s never seen it before. I forgot how totally heart-breaking and hard hitting the ending is in that film and I ended up crying again. The Safdie brothers’ direction paired with Sean Price Williams cinematography is just breath-taking, and the music is choice as well.

You’ve recently released a video for your single “Acting On The Telephone”, where did the idea for the spinning visuals come from?

Ryan Lilburn who directed the video had just got this automatic app driven rig in for his film work, and we ended up developing on an idea that we started shooting for my first single ‘Perseid 45’. It was a super simple idea that just looked cool – endless scrolling, endless movement, totally just goofing out, kind of on a Beastie Boys ‘Sabotage’ vibe with the fisheye.

‘Acting On The Telephone’ itself is a very personal song, tell us more about what inspired it?

Yeah sure…so it came about late last year before my brother passed away with cancer this March. A close family friend of ours sadly happens to be an alcoholic, and has been hospitalised multiple times. I was listening to her leave these sprawling answer machine messages on our house phone as my brother was upstairs undergoing chemotherapy, and I just remember thinking “how the hell did we get here?”. It was a chaotic point in time where I felt the need to document this woman’s life by writing from her perspective to convey the devastating contrast between her close connection to my brother as a young boy and the loss of that connection towards the end of his life.

You’ve endured some hardship over the past year, does music help to channel some of those emotions?

I swear to god, if I hadn’t kept myself busy writing, producing and creating music for Jango Flash, I would have been very fucked up right now. I’m just so grateful that I have something in my life that can save me like that when even the people I love the most can’t seem get through to me.

What was the first song you ever wrote as Jango Flash?

I actually started writing music years ago under a different alias but just uploaded them to a private Soundcloud. I was too busy playing drums in other bands to pursue anything at that time. I think the first track I wrote was called ‘Fever Dreams’ which funnily enough I’ve been talking about re-hashing and putting out properly. The lyrics speak more to me now than they ever did when I wrote them 5 years ago… which is rare haha.

How do your songs start life?

Everything is a collage for me, I’ve always loved collaging things. I write my music like a beat producer might for a hip hop or rap artist. Lots of sampled noises, lots of fragments that I splice together into one cohesive piece of music. It can start with a feeling I get from the way somebody says something, or the way a sound hits me unexpectedly and takes me away somewhere I never knew it could. From there I can introduce the lyrics, most of which I have written down in jotters along with boatloads I have stored in my phone and laptop notes.

Dude, what were you thinking?

Which artists inspire you?

At the minute I’ve been listening to a lot of Dominic Fike, that ‘3 Nights’ tune is more addictive than sugar I swear to god, it’s so smooth. Someone made a 1 hour loop of it on YouTube and I just had that on repeat while I was buying some new equipment online, couldn’t stop singing it. Also Kenny Beats who produced his track ‘Phone Numbers’ is a very talented and driven producer, so I’m super Into him right now. He has a channel called ‘The Cave’ where people come in to freestyle on beats which he makes on the spot, Denzel Curry came in and bodied this beat he made. If you haven’t watched it, you need to check it out, it’s a crease!

I really want to collaborate with Brockhampton. I would just love to get on some weird level with dudes like them who have open minds when it comes to production and visuals and aren’t afraid to make something different happen. I feel like in the past few years certain artists such as them have been a step ahead of others, their tracks are so hard and they’ve always been free thinkers experimenting with how they express themselves. Also, I feel like because there’s so many of them involved, their music never goes stale, they can just bounce off each other’s energy under one roof and be prolific.

You hail from North Shields, what’s the music scene like back home in the North East?

We have a really great bunch of venue owners and managers wanting to make cool stuff happen for independent artists all the time, which I’ve always been really appreciative of. If you’re talking categories, It’s varied man. I feel like there’s a handful of brilliant underground scenes which people get heavily involved in and then there’s people who seem to want to hit a more mainstream target audience which is also nice. I dig that the ones who are making moves and are giving their mates a hand up to the next step on the ladder so they can keep pursuing their careers. That’s what music should be about, being there for one another and supporting each other. Don’t stand there, complain andbe a dick, it’s not cool!

You and Sam Fender are old pals, what’s your thoughts on his recent catapult to stardom?

I’m super proud of that boy like, and the rest of the boys too, I love them, they’re totally magic! Having grown up with each other and worked together in one way or another, we’re all close and share a lot of similar dreams. We’ve always said that we either make it in music or we do nothing at all, and since the pressure got put on that group it’s been really cool to watch them grab the bull by its horns and make it happen surrounded by a bulletproof team of people.

What are the plans for a next release/tour and beyond?

I have another couple of songs in the pipeline and a new guitar player on the bench ready to jump in and lay down the tracks live with the band, which I’m excited about! I’m organising some festival slots for next year and getting on the back of some support tours. There’s been a lot of blood sweat and tears put into this project, and subsequently I’ve been hearing of interest from industry folk, so I have a good gut feeling about 2020 for Jango Flash!