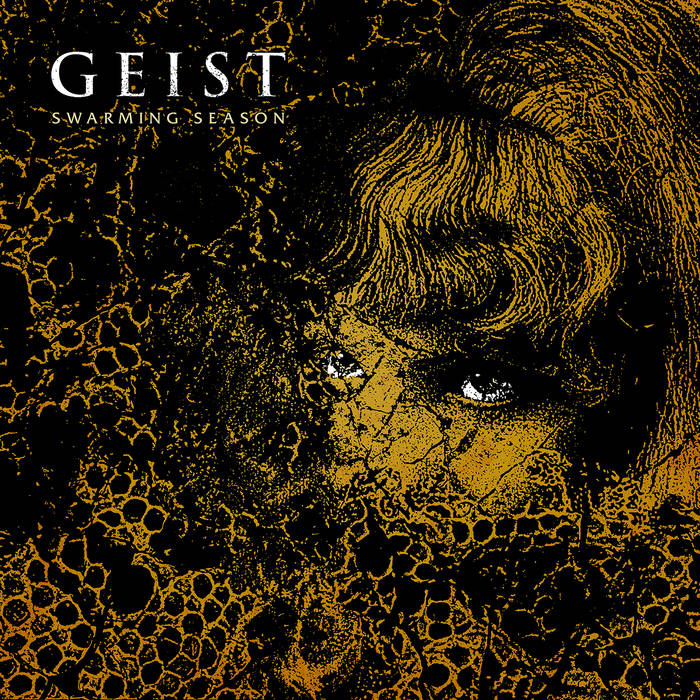 As a hardcore loving teen with a secret lust for a crunching metal riff I often wondered why the two
genres never met in the middle, a musical horseshoe. Maybe it was the widening differential in fashion after the two branched away from punk in the early 80s, a fragile peace only really breaking out with the advent of nu-metal when skate cultures collided and hair got shorter or longer depending which side of the divide you had previously been on. So, then bands like Napalm Death and Helmet could fully embrace their fetish for hardcore and metal respectively, and just around the corner grindcore and crust were being born. On their debut album Swarming Season, on Cursed Monk Records, Durham's Geist attempt to weld that horseshoe into a perfect circle and by almighty they almost do it.

Opener 'Unnatural Selection' is a conflict of half-aborted guitar motifs and unsettling spoken word until a riff straight off Psalm 69 breaks loose with solos buried deep in the monstrous melee. This is not for the faint hearted but also not to be missed.

‘Western Medicine’ best sums up the band’s pre-
occupation with capitalist propaganda and conspiracy theories as it races through more deathcore
guitar and genuinely venomous lyrics; but there are also slower moments such as on ‘Breathe
Soundless Light’, the discordant melodies tantalisingly close as if lurking in the shadows and the claustrophobic walls of paranoia, none more apparent than on the self-explanatory ‘Sleep Deprived’, so fast that its layered vocal stanzas are almost on top of each other but conveys the frantic and frazzled exhaustion of the insomniac.

The lead track is brutally heavy hardcore but with enough hints of melodic vocalising to make it the band's most accessible track yet. That is not to say Swarming Season is an album of compromise. The track’s sludgy riffs are relentless for fans of Fudge Tunnel or Strap It On-era Helmet. There is barely a let up but that’s not to say any of this record is samey. The riffs bounce around from seething speedcore to dense hardcore,moments of clarity such as the clean introduction to ‘Election Day’ and its introspective feedback in the outro add chinks of light to proceedings even if the subject matter is similarly dark, the nearest thing to death metal here.

Similarly the lone guitar and off-kilter crash marker in ‘Silent Hive’ is respite from the persistent blast beats that adds to an uneven musical surface, which gives Swarming Season a rough cohesion often lost on hardcore or crossover records.

This is an album of distinct moods conveyed in subtle changes of pace and style throughout but without losing the overall message and emotional state within which is, literally, one of the world turning to shit. So, ‘Kennel Cough‘’s urgent marching beat and seemingly improvised drum patterns are over before you know it but not without leaving a knowing unpleasantness in its wake as ‘Buried Language’ rounds things off with a healthy dose of speedmetal and a suitably abrupt ending. And at eight tracks and twenty five minutes a legitimate claim for album status too.

Swarming Season is out now on Cursed Monk Records.