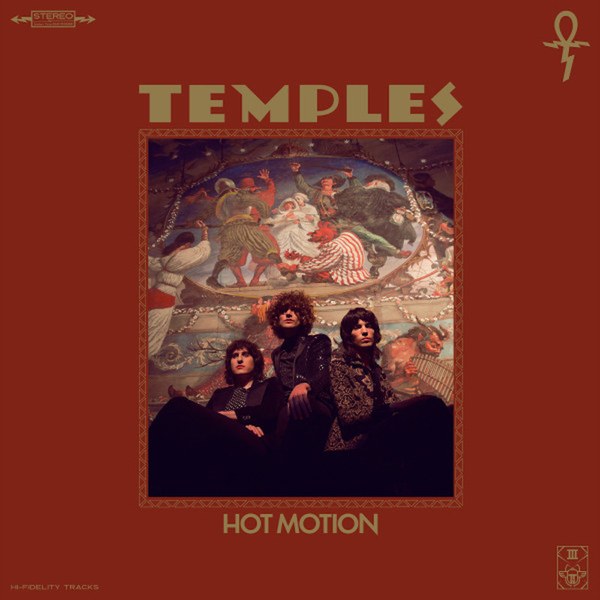 Whether intentional or not, there’s something apocalyptic and survivalist about this new Temples record. As if the trio from Kettering are preparing us for all hell to break loose. Signs start to show in the opening title track ‘Hot Motion‘. An energetic start to their new third record with Temples’s trademark melodic psychedelia blended with fuzzy glam rock rhythms. The structure of the lyrics take the form of a countdown, as if this is a prediction of the last days of impending doom. It begins with: “Fourteen days of commotion. Thirteen days in the storm. Twelve long days of destruction,” and ends with “Two more days of sedation. One more day left to go. We stand still in the ocean. And then there we flow.” Really intriguing lyrically and along with the well-composed shape-shifting rock composition make it a real strong start to the enjoyable and technicolored Hot Motion.

‘The Howl’ continues this prophetic fight-against-the-inevitable Armageddon feel. It sounds like a protest organized by Kasabian or Drones-era Muse. It contains a stomping beat performed by their new Dutch drummer Rens Ottink (snatched from another psychedelic-inclined group from the Netherlands called Pauw). With the tempo suiting the marching lyrics: “Raise your head up. Stamp your feet. Hang the world down.” It progresses to sound like a call-to-action with an important message:  “Calling all in the world. As they told us. With the weight of their woes. On your shoulders”.  Temples’s lyrics about being on the brink of some major change are rather vague, but this leaves listeners to fill in the blanks. An example is on the twinkly haze ‘It’s All Coming Out’. “Have you heard. What is happening? Have you noticed. What is going on here? Have you seen it? Been a witness? Can you feel it? ” It’s sounds like a paper boy running through a neighbourhood holding scaremongering newspapers.

‘Atomise’ – one of the great examples of Temples‘s eclectic rock experimentation on this record, as it goes from mystical and calm acoustic folk to a faster thumping beat – takes the doomsday-ness to scientific levels. With the protagonist seemingly wishing for a new beginning: “Let’s atomise. Disassemble. Pull apart. Take it from the start. Manufacture. Synthesise. Right before your eyes. See the great explosion. In one iota-sized unholy afternoon. Raise the banner. Hear the rolling thunder”.  ‘Not Quite The Same’ also has an ominous sense about the future but it seems to imagine the story of a curious person visiting a fortune-teller. It’s all very Lord Huron because of the lyrics and mix of harmonies with gritty rock-jamming.  “Hear the tale. Foretold in seven ways. Not quite the same as before. We replace. The day before today. Down from the mountainside”.

‘You’re Either On Something’ discusses a different yet equally important type of anxiety. It’s about social anxiety and how people react to being in a party situation, told from the perspective of lead vocalist James Bagshaw, who is one of the anxious ones. It suggests that some people need to have a drink to reach a level of comfort. “It was an hour after midnight. Reminded by my twitching eye. A crowd of people sounded loudly. The shadows cast were standing shy. I glugged a swig from the bottle.” Actually reading this without music it looks like Mike Skinner poetry.

For long term fans, Hot Motion is thankfully very Temples-like, yet it’s also brimming with new ideas and techniques (for example, James Bagshaw used a Telefunken V47 Valve Condenser to bring on the personality in his vocals more). However, Temples maintain a proud usage of hypnotic melody – something that’s very important to the band, as mentioned in a recent interview about modern music: “There’s definitely a post-punk thing going on, noisy guitar bands, but there seems to be a lack of…melody. The melody tells a story as much as a lyric a lot of the time, and I think there’s something lost if you don’t have a melody.”