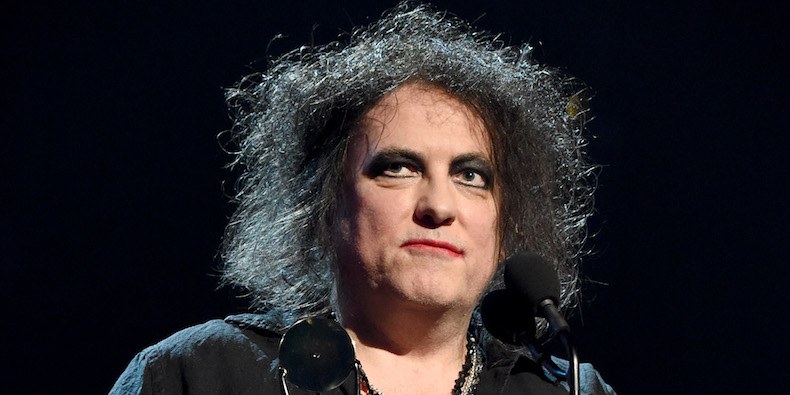 The Cure‘s long mooted follow-up to their 2008 album 4:13 Dream is slated for release before the end of this year. But in a Spanish interview Robert Smith has surprised fans with the news that he has not one but three new Cure albums in the works.

When asked about the forthcoming album by the Cure, he replied “Actually I have prepared three albums, two of them more advanced. The first will be the one that we will release very soon. I think that the first single, or the whole album, will come out this Christmas, or a little earlier. It has the title of I work Live From the Moon and it will surely change its name.” He told the Spanish website Zocalo.

“If we talk about the first album, of unpublished songs, it has the style of The Cure , but much darker and emotional, I even think that I still have a hard time interpreting some of the new songs because they came out of the bowels, I let go them, I took everything I brought and I was inspired by transitions, losses, in the physical absence of my mother, my father, my brother … what a pain! “. Said Smith of the album he has previously claimed harks back to the Disintegration-era of the band.

He continued: “The second album, which I already have more advanced, refers to much freer pieces and with a more pronounced, stronger sound, and that to record them has to be live, yes, with that experience of putting together a concept based on the interpretation of the moment.

“The third, which is crazy, is a noise disc, with different aspects and environments, all based on experiences on a stage or on my paths, in situations where noise is present and to which we are so accustomed that we don’t pay attention.”

The legendary songwriter also talked about how he doesn’t concern himself with expectations or current musical trends. “The whole industry has changed and I feel fascinated with what happens with my music and the expectations it generates, but who knows what comes next. Everything is so new that I am surprised. I do not stick to fashion, I do not live by standards.

“I do not listen to what sounds are most publicized, on the contrary, I play a band that they recommend and that has few reproductions or followers. For me, the number of followers is not equivalent to quality or talent, then, I look for groups and soloists that move me.”

Smith also explained why he has become quite reclusive in recent years: “I have become an observer rather than a protagonist, in that sense. Maintaining my privacy has been very important for me and I prefer to listen to music, observe events, with someone who has that interest, rather than being the center of attention. center of attention … better in my show, and not always, because who stands out is the audience, “he said.

Smith also talked about how he is wary about new technology and social media: “It is not my task to criticize, but it is not my thing. I do not see very healthy that the young people of today only live to be aware of a cell phone, an account, a like …

“The human connection has been lost and I would love to think that ‘rescuers’ are coming, those who reconsider and engage in a talk or debate in person. Maybe it is I who does not know how to adapt, maybe it is outdated, but I feel that way about that”.

4 thoughts on “NEWS: Robert Smith reveals The Cure have three new albums in the works”