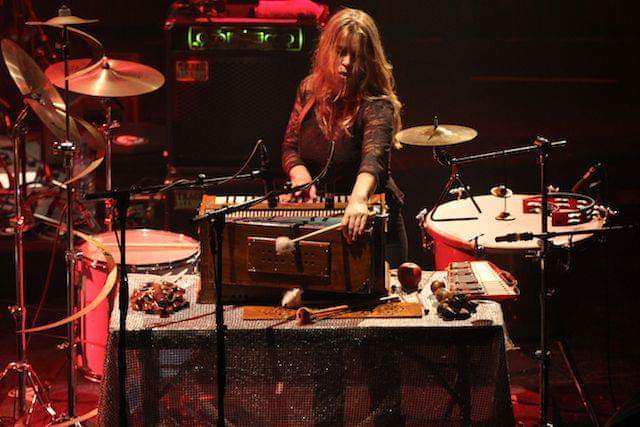 Mally Harpaz is a name that won’t be familiar, yet, to many people outside of North London. But for anyone who has listened to any of the three envelope-pushing Mercury Prize nominated albums by Anna Calvi and wondered who was producing the wide variety of sounds behind Calvi – tantamount to an orchestra at times – or flitting about dexterously and effortlessly between instruments on stage, you need look no further.

Fresh from a couple of years touring Calvi’s ‘Hunter’ album and a Mercury Prize performance a few weeks ago, having self-released her debut solo album, ‘Zoom In Zoom Out’ earlier in the year and now about to pick up the reins again of a budding solo/collective career, Mally took a break to come under the scrutiny of GIITTV.

GIITTV: Hi Mally. To get us going, can you tell us about your background, and how you came into the music business? Are you from a musical family? Did you have any formal musical education?

MH: Hi, thanks for having me. I had piano lessons as a kid so have always been interested in and involved with music. I really got passionate about music when I was a teenager and started going to gigs, buying records and discovering music. I fell in love with the drums and started having lessons. I also taught myself by listening and playing along to records, playing in bands, referring to music books, etc

GIITTV: I think you started out as a drummer (in Lunatic Crash)? As a one-time drummer myself I think you need a certain personality, like a goalkeeper in football, but your persona appears to be calm and gentle.  Did you imagine your musical career developing in the way it has done or did you think you’d still be thrashing the kit when you retired?

MH:  I still think that I will still be thrashing the kit when I retire, ha ha! Drums were the first instrument I played knowing that music is my life and what I want to pursue. I was always interested in music as a whole and excited about playing various instruments, I think it gives you more avenues of expression and understanding of music, but I still love playing the drums, it feels like home and I can’t see myself ever stopping.

GIITTV: There are several stories about how you met Anna Calvi, including the one that often crops up where musicians are concerned – “in the toilets at a gig”. How true is that?

MH: Yes, it’s true; we have met in the toilets at a gig in Kentish Town. We were both playing in different bands on the same night.

GIITTV: What did you think about the recent Mercury Prize award show, in which you participated for the third time? Apart from Anna Calvi’s dramatic performance, and your contribution to it with drummer Alex Thomas, some of the antics by others that night have polarised opinions. What’s your take on it?

MH: I thought it was a great night with lots of really exciting performances from the different artists. It’s great to see so much creativity and talent and to be part of it. I think it’s an exciting time for music in the UK

GIITTV: You’re known as a multi-instrumentalist now and I’ve seen you playing synths, guitar, bass, pedal bass, harmonium, drums, assorted percussion, vibraphone, glockenspiel, and hammered dulcimer; sometimes several at once! What’s your favourite instrument and are there any you don’t think you could play?

MH: I love playing music and I think when you play you are in service of the music so it’s about what sound or texture the piece needs. I find it really exciting learning new instruments and I can get quite obsessive and really throw myself into it. I guess drums and any percussive instruments are my go to, and where I feel really free. Piano is another instrument that I can spend hours playing and is great for composing which I really enjoy and find a hugely important part of my life.

GIITTV: I believe you have a home studio at the bottom of your garden in North London. Tell us more!

MH: Yes, I’m very fortunate to have had the opportunity to build a little, completely soundproof studio at the end of the garden when I moved in with my girlfriend. I have a lot of instruments so when I moved in it made sense to have a separate space for me to make music in. I’ve recorded the majority of my debut solo album ‘Zoom In Zoom Out’ in my studio.

GIITTV: You seem to have an interesting ‘sideline’ if that’s an appropriate depiction with the Blind Dog Studio, an artist collective which you lead. How did that come about, who’s in it, and is it something you’ll be expanding further? And is there actually a blind dog?

MH: Yes, I have a gorgeous blind Jack Russell who is truly inspirational and I named my studio after her. The collective was formed very organically. When I started performing my own compositions live, I wanted to create the right environment for it as I feel the space of performance is a massive part of how we experience music. At the time, I also started a collaborating musically with two other wonderful artists – James Marples and Hazel Iris, so it made sense to put on these nights together. I often invite other artists, musicians and bands to take part in these events, celebrating music and art I love.

GIITTV: You play a lot of your gigs, as Mally Harpaz and with other members of the Blind Dog Studio collective, at small and quite obscure venues, some of them with a capacity for only 25 people all-in. I understand the most recent one was a vintage clothing shop. What’s the attraction of such tiny places? Is it just the coziness? And which is your favourite?

MH: I love performing in unusual spaces, and I think the intimacy adds an element of urgency and uniqueness. I’ve pretty much loved every venue I played in but some of my favourites were the Intimate Space in Hornsey and the Hundred Years Gallery. Another unforgettable night for me was my album launch party at Mirth, Marvel and Maud in Walthamstow. It’s a beautiful venue with a lot of history and I was overwhelmed by the amazing response I got from everyone. Releasing an album is a very personal experience so the wonderful feedback means a lot.

GIITTV: You play most of the shows in London over the year but fans elsewhere rarely see you. Is there any hope for them that might change?

MH: I’m delighted to say that we are going to play in Berlin for the first time in November. I will be going there with my band, and will also be playing there with Hazel Iris who is now based in Berlin. It will be a great night and I’m super excited about it. We’ve also played in Margate in the summer at another really quirky and great venue – Tom Thumb Theatre and I’m hoping to go back there as well as coming to other cities during the next year.

GIITTV: You’ve got one album under your belt now, which we reviewed earlier in the year. What are your feelings about it now, six months on? Are you contemplating that ‘difficult second album’ yet, and if so will it be in a similar vein or will it veer off in another direction?

MH: I’m very proud of what I achieved with ‘Zoom In Zoom Out’ and am still enjoying very much playing it live. I’ve started working on my next album and looking forward to sharing it with you.

GIITTV: Lyrics are at a premium in ‘Zoom In Zoom Out’. Are you one of those people who believe they can express themselves better through their musicianship than their words?

MH: I love words, but yes, I believe there are many ways to tell stories and I feel music is definitely one of them and very intuitive to me. When I write I follow what feels right for a piece of music. This album was predominantly composed as part of a project with a fantastic video artist Clara Aparicio Yoldi; therefore it felt right to have the music mostly instrumental. It felt to me like it was right form of expression and way of taking the listener on the journey I intended.

GIITTV: When you’re writing, how do most of your songs start life? A piano part? A chord? Melody? Does inspiration simply come, or do you have to seek it?

MH: Could be any of the above, I can come up with an idea while walking, seeing art, I go to a lot of concerts, dance performances or theatre and find a lot of inspiration there. I usually compose on the piano or sometimes starting with drums actually. I record a lot of raw ideas on my phone, it can be rhythm, melody, chords, words or a concept, and it’s then about committing to an idea that I believe in and developing it ‘till it’s a complete piece of music. Letting it grow and evolve into what it wants to be.

GIITTV: On your website in the Blind Dog section it says it is ‘Available for sessions – either in person or online – and for composing for multimedia, films and dance performances’. That’s quite a broad range of skills and of course Anna has composed for opera and for the TV show ‘Peaky Blinders’. How do you see your career progressing now – as a performing musician or following one or more of those specialisations? And the 64,000 dollar question. You’ve been a fixture in Anna Calvi (the band) for almost a decade. Do you ever envisage a day when you won’t be?

MH: I absolutely love playing with Anna; she’s a very close and wonderful friend of mine and an incredible musician so I’d like to think that we will always be playing together. She is a massive part of my life both personally and musically. In terms of my own music, music is my passion, way of life, urgency, driving force, reality, escape, everything. I always push myself to evolve and grow with it, so excited to see where this journey takes me.

GIITTV: A more general question now. I’ve been intrigued in other interviews how little time musicians have to make music these days. As your solo career progresses how much of that time is taken up by administration and business affairs? Does it frustrate you?

MH: I try to have some kind of a routine so my general approach is music first, the rest after. I try and get on my piano/drums/writing first thing in the morning and do the admin stuff later in the day. Some of the admin stuff can feel creative and empowering but yes, I admit to sometimes feeling frustrated at how time consuming it can be.

GIITTV: Finally, if you weren’t a musician what would you be? Do you ever aspire to being ‘something else’ (model, politician, footballer, train driver…?!)

MH: I used to feel envious of dancers as I think it’s such a beautiful way of expression. I also truly admire people who dedicate their lives to making this world a better place.

GIITTV: Mally, thanks for speaking with us, and the best of luck in all your future endeavours.

Mally gives the kit a workout in the company of, inter alia, James Marples, Hazel Iris and Anna Calvi: