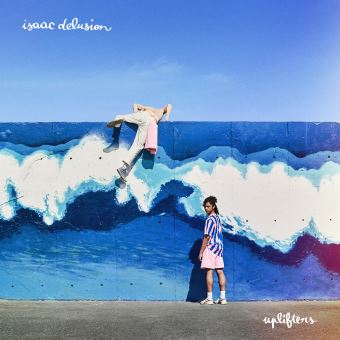 Parisian band Isaac Delusion have built quite a following in their home country and have played sold out shows at venues as prestigious as Paris Olympia as well as having a date booked at the iconic La Cigale for January next year.

Uplifters is the band’s third album and might just be the one to take them overground in the U.K. with its smart and always tuneful electronic pop. Comparisons with fellow French bands such as Air and Daft Punk may seem obvious or cliched but are valid up to a point; Uplifters certainly has echoes of these groups but, crucially, its own identity too.

‘Fancy’ is both the lead single and first track of the record and was trailed with a fun video at odds with its darker lyrical overtones: “You see the guy you fancy / Is dying just like me” opines singer Loïc Fleury over an upbeat, sparkling synthpop track.

Fleury’s vocal is often compared to Jimmy Somerville, and while that similarity isn’t at all apparent on ‘Fancy’, it certainly is on the second song, ‘Disorder’, a fantastic high-energy track that, although tinged with minor key melancholy, is very far musically from the Joy Division song of the same name.  There’s echoes of early Depeche Mode in the mix too, with that brilliantly bittersweet aesthetic in songs like ‘Parrots’ and ‘People You Know’.

‘Together’ is a fascinating track and maybe the album’s crowning achievement, some incredible layered vocals and a truly elastic bassline complement a naggingly familiar stabbing synth line to create something thrillingly unique. It sounds nothing like Air and it sounds nothing like Daft Punk, that’s for sure! It’s followed by the Scissor Sisters groove of ‘Magicalove’ which, if anything, has an even more impressive bass motif.

Uplifters is one of those rare albums where virtually every track sounds like a single – even something like the downbeat ‘Tell Me How’ reveals itself to be a potential 45 (or the streaming equivalent) after a few listens. There’s only a couple of songs here that are sung in French (the rest are in English) – counting the bonus track ‘Couleur Menthe à l’eau’, which actually was a single last year despite sounding like the least commercial thing on the album.

In Uplifters, Isaac Delusion have made an impressive statement of intent with a very strong yet extremely accessible album.

Uplifters is released by Microqlima on 8th November.