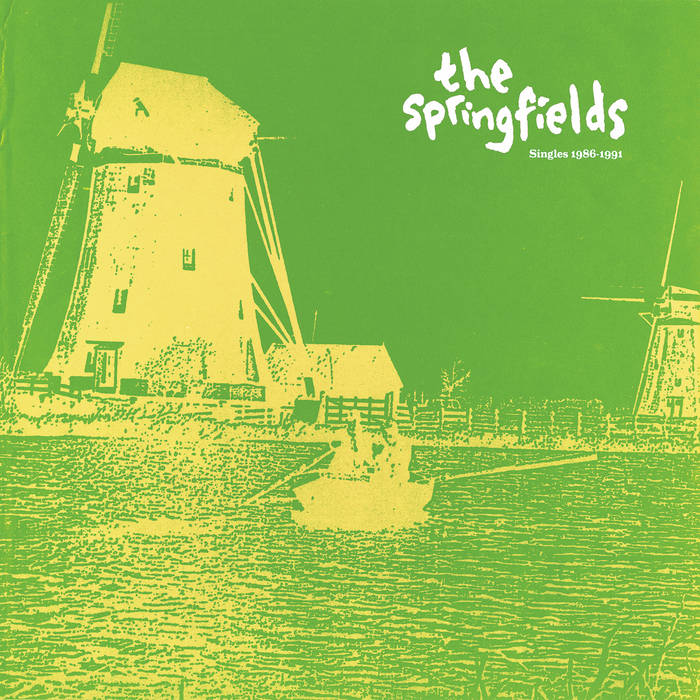 Not to be confused with the early band of Dusty Springfield, Ric Menck and Paul Chastain’s The Springfields cut a handful of sublime jangle pop records between 1988 and 1991 (no, that title isn’t a typo!). Pretty much indie pop royalty, Menck and Chastain were possibly best known for their later work as Velvet Crush, though both also released solo records and were also in such bands as Choo Choo Train and Bag-O-Shells.

And in fact the compilation begins with a Choo Choo Train single, the ‘Ticket To Ride’ flavoured groove of ‘This Perfect Day’, originally a single on the wonderful Subway Organisation label in 1987 (getting closer!) and its B-side ‘Bicycle Song’, (originally released as ‘Happy Bicycle’). And if it’s an odd move to begin the compilation with two songs by another band, (one of them with an altered title), the rest of the compilation is pure Springfields.  In fact, every track they committed to vinyl or CD is here.

Confused?  Well don’t be, as this album has some truly golden moments, and none more so than the first Springfields single ‘Sunflower’, a beautiful song that captures the very essence of Summer with it’s lovely harmonies and lyrics: “In the Summer / The sun shines on me / All day”. Indeed, ‘Sunflower’ is so great, that one can almost feel the warm glow of a late afternoon in July as it emanates from the speakers. It’s B-sides were both covers, the minor key introspection of The Hollies‘ ‘Clown’ and a nice version of Matthew Sweet‘s ‘Are We Gonna Be Alright?’, which sounds like a blueprint for the sound of The Pernice Brothers, which would come along a decade later.

‘Wonder’ is another jangly delight, originally a single in 1990 and a cover of Primal Scream‘s ‘Tomorrow Comes Today’ remains the only officially-released version of that song, with Primal Scream themselves never actually putting it out (it appeared on a brilliant Janice Long Radio 1 session in 1986). It’s a fantastic song typical of the early ‘Scream sound, the bands clearly sharing influences such as The Byrds and Big Star. And talking of Bobby Gillespie (well, we sort of were), 1989 single ‘She Swirls Around Me’ has a very Jesus and Mary Chain intro, specifically ‘Just Like Honey’ (or ‘Sowing Seeds’!) and is a lean 1 minute 35 seconds long.

Another spirited cover, this time of The Pastels‘ ‘Million Tears’, actually appeared on the B-side of two different singles – in fact, two of the band’s five singles featured the same three tracks in a different order; one had the excellent ‘Tranquil’ on the A-side – a cover of a song by The Clouds – and the other the band’s own ‘Reach For The Stars’, which sounds like The Byrds covering Blondie‘s ‘(I’m Aways Touched By Your) Presence, Dear’.

The final track on the album hasn’t been out before at all, and is the acoustic ‘Scatter Good Friends’, which gives the album a low key, understated ending.

So, in summary, there are twelve songs here, including all nine songs that The Springfields released, a couple by one of their alter-ego bands Choo Choo Train and an unreleased song.  All of them are at least pretty good and most are totally great.

At the time of writing, the indispensable Sarah Records’ ‘Sunflower’ EP would set you back a minimum £40 on Discogs, so the decision to buy this compilation for a tenner or so (actually the first ever album release from the band) would be a pretty smart one.