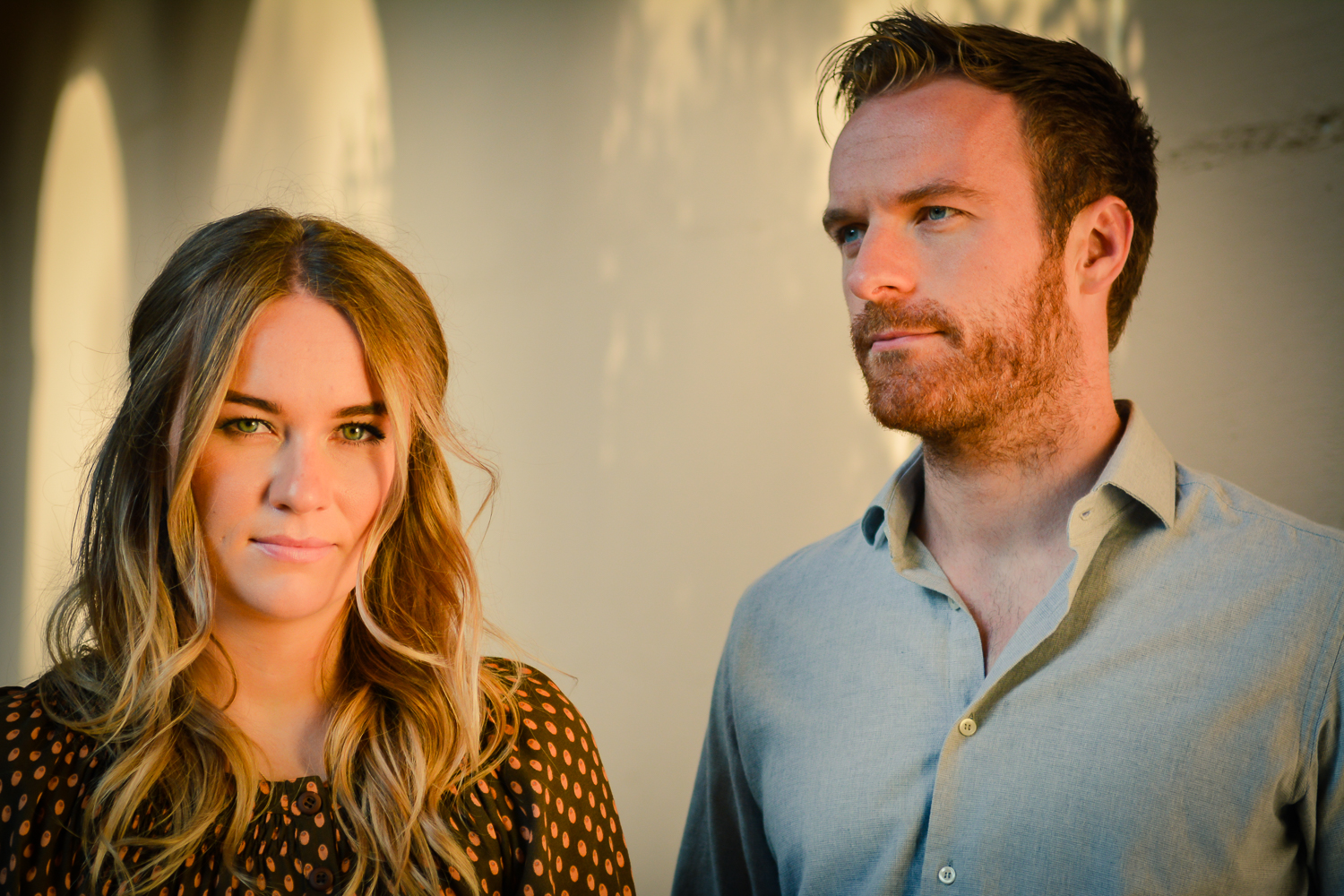 Joe: “Being the sort of band we are our fans like to chat to us during the gig”,

Helen: “They like to heckle us during the gig!”,

Joe: “They don’t, they like the intimacy, we’re the sort of band where they feel they know us and most of them have been a few times”.

When I meet Joe and Helen Hamill of Teesside’s Cattle & Cane in the family home they are already in excitable mood for a near sold-out tour that would start in Glasgow the following evening in support of the band’s third album, Navigator, released on November 8th. And Joe was keen to tell me more about the album, “The most important thing with this album is we are happy with it. I know it’s an obvious thing to say but it’s really hard to get an album you’re happy with. Really hard. You write the songs, you live with the songs and I’m very particular about what they need to sound like. I don’t think I’m over the top, I always get it to where it needs to be, but especially on this album.”

“It’s definitely our most ambitious album. We took the demos to Pete [Hammerton, producer] and we all agreed we wanted it to sound more grown up”. Helen agrees, “there are different genres on there. Folky, poppy stuff and [latest single] I Wish I Knew Jesus (Like You Do) is a bit darker. We didn’t want an album where every song sounded similar.”

The band is now virtually unrecognisable from their folk beginnings as Joe explained, “if I heard it now from ten years ago I would be really happy. We are different people to who we were then, we are more mature. I’ve definitely approached songwriting differently from working with people like Beth [Neilsen Chapman]. People like her are an opportunity to learn and she was so accommodating to us in Nashville.” The country legend invited the pair over recently to perform at her birthday party, “I was nervous performing for her because you just know there are people there that are Grammy Award winners. We are probably the sort of people who need that kind of push sometimes. We are performers but we aren’t gregarious but you don’t want to be too modest either do you? You have to push yourself.”

Joe has also been building quite a writing CV away from Cattle & Cane and has had a number 1 album in Belgium with Alice on the Roof and it is something he is rightly proud of, “over the years I’ve honed my skills as a co-writer. I think it’s a great thing to do because you’re bouncing ideas, experiences and influences around to come out with something you wouldn’t by yourself. There is great merit to writing by yourself and I do that still but writing with people like Lucy Spraggan is amazing, she is so good to work with”.

But the pair agreed the country influence is integral to the band’s sound as Joe teased, “we might do something else early next year Nashville influenced. We definitely could be part of that world”, but Helen was a little more in the moment, “we do have that kind of organic, rootsy thing and we still love [debut album] Home but [this album] is a departure from that and it feels like the type of music we always wanted to do and it’s the first time we can listen to it and be really happy with it.”

Joe continued, “it’s the happiest I’ve been, it’s the best album we’ve done, I would agree with that. We’re very happy with it. There are so many different songs. The two that Helen loves the most are not mine. We have different favourites and it’s interesting how broad it is.”

Helen: “I would say it’s cohesive but that wasn’t a priority so just the strongest songs are on there. Albums are still important but it’s more about the songs and what they can be used for”. “Spotify is changing the game I think”, said Joe, the band have collected over 10 million Spotify streams and around 80k monthly listeners, “you can release every song off an album really”. “But we won’t do that!” reassures Helen.

While perhaps not a concept album I asked Joe whether it really is a break-up album or more a metaphor for the follies of youth as the band gets a little older, “all the songs were written in the last year and a half. Seven are break-up songs actually and that was me last year really. But, there is always positives to come out of that. All the songs are personal which is good. These are more adult relationship songs really.”

Of the album title he said, “we are trying to be who we are. I mean navigating people and situations, particularly in the music industry, to get the best result”, Helen produces a shrink-wrapped CD, “this is the first album we’ve put a photo of ourselves on. We didn’t want to be hiding behind artwork [anymore] so it’s like, this is us”. Joe nods, “It’s the start of the next stage [for the band] I would say.”

Both: “but not in a bad way, it’s just moving on.” Joe is optimistic, “You hope the songs will get traction here or there so we hope we’ll get festivals, we hope we get a tour in Europe. I believe in the songs enough that they will get picked up by radio or TV to get us to the masses.”

For all the sold-out shows and streaming numbers Cattle & Cane have perhaps still waiting for that breakout moment and Joe pre-empted my next question, “The whole industry thing? We don’t know how we’re perceived. Especially from London. When we first started we had a lot of buzz and labels were coming to see us but the songs weren’t ready, I couldn’t sing very well and the lyrics weren’t particularly good and then since [second album] Mirrors we’ve had a little bit of label interest and it felt like… it was the first experience of… true bullshittery that we’ve had. But then we had a meeting with Miles Leonard [former head of Parlophone] who signed Coldplay and to be fair there’s no bullshitting from him. It’s like he’s following our journey.”

But, as Helen explains, “it is really difficult to place us in the industry because we are kind of in our own lane, which is not a negative thing. I’m a big believer that everything happens for a reason, there are so many bands that get signed and then dropped because their album doesn’t get into the top 10 and then they are tainted with that. Thankfully that hasn’t happened to us. Whenever we earn money we get that money and we don’t have to recoup this massive debt.”

Talk turned to the male domination of the industry and the recent Me Too movement, “I don’t think we’ve ever been treated differently. I’ve never had a negative experience [like that] in the industry” explained Helen,  although Joe was a little more forthright, “the Me Too thing is very real. We know people who’ve suffered from that”. “But I’m not even talking about Me Too”, Helen went on addressing her brother, “I just mean like someone asking you the question assuming that you’re in charge and I’d get a vibe and I’d just be like, pfft, see you later”, and as Joe laughed, “Helen is probably more of the boss actually!”

On taking on the role of the label, Helen went on, “we literally do everything. We could pay people to do it but then why would we do that when we can do it ourselves. And you feel better for it when you achieve things and think ‘we did that’. You feel much more in control of things.”

Joe: “I think people have this perception that we’ve always been signed with backing behind us but really we’ve never had it”, and Helen was keen to add how hard the band work, “not many unsigned bands sell as many tickets as we do. We’re very grateful and feel like we’re in such a good position people buy tickets to see our shows. Not only do they buy them they come back as well 5, 6, 7 times. It’s amazing, and that’s what we want and that’s what keeps us going”. They are not against signing to a label though, “it would have to be something where we are a priority, we wouldn’t want to be on a label where we could just get ignored and pushed to the bottom of the pile”. Joe: “Because then you’re dead and you would have to just get out and start again.”

On their Teesside roots it’s clear that is something they are still very much proud of and a show at Middlesbrough’s Westgarth Social Club recently sold out as soon as it was announced, Helen: “we’ve got Stockton Calling and Twisterella festivals, and at Orange Pip Market you can see live music every month, there is way more bands around than when we started.”.

The lyrics to the bands song Infant Hercules featured on Middlesbrough Football Club’s home shirt last season and I asked Joe how that came about, “Ali [Brownlee, local broadcasting legend] liked the song and I sang it at his funeral, then there was some initiative last year for the club to embrace its heritage and history so they put forward the song. But it didn’t really help on the pitch..!”. Helen explained, “quite a few people at the club loved the song. We had the video played at the stadium. Very proud of that”.

The band also did a big orchestrated show at Middlesbrough Town Hall with the Northern Orchestra last year. Helen: “so stressful! It was amazing to hear the songs that way but… too much pressure on the night. We are doing a lot of intimate shows this time so the songs will be stripped back and then when people listen to the album they’ll think this is a bit different.”

An open piano stands in one corner of the room and I wondered about Joe and Helen’s childhoods here and it was nice to hear them talk openly. Helen: “our dad loved the Beatles”, Joe nodded, “he died thirteen years ago but he totally inspired us and encouraged us to sing. So, we grew up listening to…”, Helen: “Billy Joel, George Harrison…”, Joe: “Roxy Music, Beatles, Beach Boys, loads of class songs really. Great education musically. I think he felt like he’d never had that opportunity so he was determined his kids would have that chance… And I’m happy with life…”, before Helen has the final word, “doing what we love”.