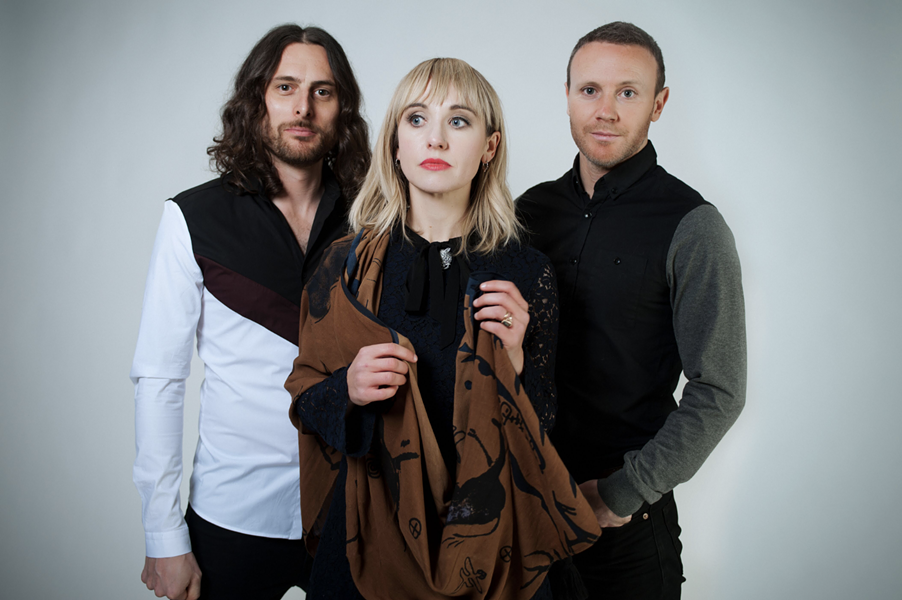 Unless you’re on a major label, you have had a successful debut LP, you’ve gone on to have a sustained career, you don’t tend to get to 10 years and have the chance to reissue your first release, and an EP no less.

The Joy Formidable are a different beast. Always on their own terms they ploughed a furrow that manages to appeal to a broad fan base. They’re heavy enough to be included in the Hard Rock charts, they’re melodic enough to be Indie favourites, they combine them to such great effect that they have a big following in the U.S and they are proud Welsh people who have provided a stable for local and national bands, especially those in their native tongue, and therefore are beloved at home.

So naturally they have included an extra disc to their ten year celebration of A Balloon Called Moaning by recording a reimagining of the EP in Welsh but also stripped back and with lush orchestration and gentle acoustic guitars.

GIITTV caught up with bassist and guitarist Rhydian Davies to chat about the new EP and their own festival, Formidable Fest, that happened over the weekend.

The reissue of the debut EP has been out for a few weeks now, how has it been received?

It’s been fantastic, it’s so encouraging that it’s not just been Wales and the UK audiences, its everywhere that we’re getting support for a Welsh language release. It wasn’t just a case of rehashing an old release, we’ve re-recorded it in Welsh but acoustically, because we’ve enjoyed doing acoustic tours intermittently over the years so it’s all come together and made sense. It’s been so nice how open people have been as some people obviously don’t understand Welsh and we’ve been dropping in Welsh language songs quite regularly and they’re really intrigued and they want to know more and it’s great.

When did you have the idea to do the reissue with the re-recording in Welsh?

Did the recordings come together quite quickly as there is the orchestra and strings that may have taken some time to arrange?

There are few live recordings on there as we had a gig in Boston for New Year’s Eve last year and we had a string quartet for some of the songs and it turned out so nicely that we wanted those to feature on the record so it probably pushed it along a bit.

Was it necessary to pull apart and start again with some of songs when arranging them for the Welsh lyrics as they don’t scan the same as in English? Was that quite difficult?

It was a challenge yeah, because the stories in the lyrics are really important to us so it can be a task because a pure translation doesn’t always work, quite often it doesn’t, there’s many more syllables to the Welsh language so it can be difficult fitting to the melody. So where do you draw the line if you feel you are compromising the melody a bit but you want to get the subject matter in exactly? It is an art in itself, translation. But we really enjoyed doing it because it brought back the sense of what we were writing about back then.

What do you remember about the original recording of ‘A Balloon Called Moaning’? Did revisiting it bring back a lot of memories from that time?

What I really remember is me and Ritzy in our bedrooms, it was what started the band really, those songs ‘Austere‘ and ‘Cradle‘, we didn’t even have a drummer at the time, it was just really exciting making music again as we’d had a difficult time with our previous band. It had become messy and we just wanted to escape so we came back to a North Wales and I remember just having fun working on a computer and the production of those early demos, and it does take you back, music, it’s very powerful, it has a powerful effect on the senses.

Do you have a favourite from the EP?

It’s so tricky, I find it difficult to have a favourite as it is something for just that period of your life and all the episodes but ‘The Greatest Light Is the Greatest Shade’ feels timeless but it is on the sad side but I tend to like sadder songs.

Would you change anything about the EP now or is it just a snapshot from that time?

That’s a good question actually because it’s funny how as you progress and you look back you may do something differently. But I don’t like to have regrets because everything is a learning process and if we were to record it now we know so much more about it but I do like how it is naive. We were getting to grips with being our own producer and with what’s possible so with that side maybe but I stand by the songs and as I say it’s a moment in time and that why I think just remastering it now feels a bit weird as we’re not really nostalgic we always like being in the moment or looking forward. So on the whole, no, I probably wouldn’t change anything.

You’ve got your own festival this weekend, with a great line up of Welsh bands including Blood Red Shoes and Gwenno and others, is this a celebration of your favourite bands?

Absolutely, it’s company we’re very happy to be in, but it’s also a nice extension of the label, we’ve been wanting to do this for a while and it feels like we’re opening things up a bit, if we can help draw attention to what we think is so much great talent in Wales then definitely we want to get involved and I’m really encouraged. It’s not always been that easy, especially in North Wales with the live side and the networking but I feel it’s improving constantly, and the only way it improves is with people being active and that’s the thinking really. There’s also a great art side to it, there’s so much great art there. I’m looking forward to it.

Is there anything due to come out on the Aruthrol label soon?

For the Formidable Fest, will you be splitting the acoustic and full live band up at all?

We doing two shows, we’re starting the night acoustically, probably not all the Welsh versions, but probably a fair amount, and then a mixture of all the albums in the main set.

Are you looking to start the new album in the new year?

Absolutely yeah, we want to get back in to the studio, we finish touring just before Christmas and then we want to start straight away in January, we’ve got some songs there already so really excited.