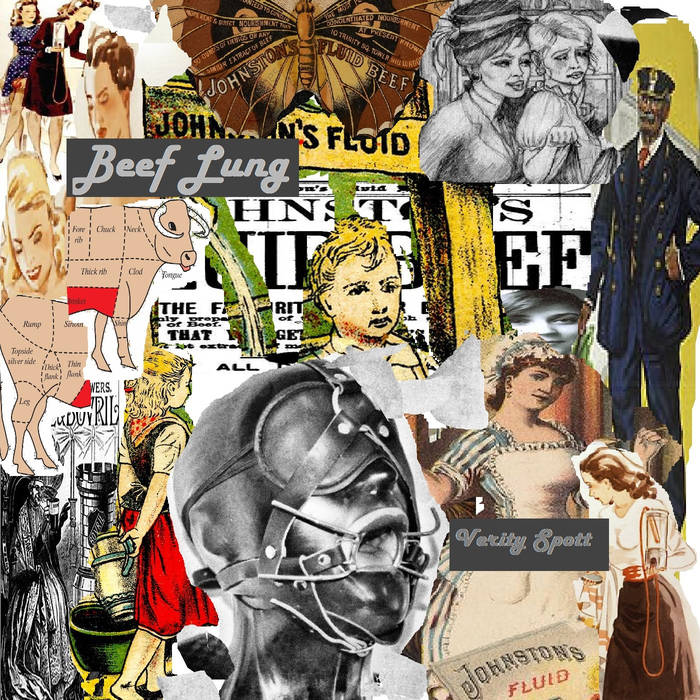 The avant-garade group The Residents’ second album, Not Available, was originally recorded as their follow up to their debut album Meet the Residents. However it was decided to hide it away and release it only when the members of the band had forgotten about its existence. The new album from Verity Spott, Beef Lung, has a similar legend. Originally recorded in 2011, it languished in a hard drive somewhere until Spott re-found it and decided to release it. Probably. Who really knows? Well, probably Spott, but what is apparent is that Beef Lung is as uncompromising album that rewards with repeat listens, but that is down to the listener’s discretion.

After the three minute ‘Beef Lung’ the albums lynchpin kicks in. ‘Beef Lungs’ is everything that you’d want from a harsh noise release. Its long, unyielding with a dogged relentlessness that has to be admired. Throughout Spott musically assaults us with crashing wave after crashing wave of abrasive electronics. But there are breaks in the storm where we can, albeit momentarily, catch our breath before we are hit with another load of viscous voltaics. The final third of is where it all kicks off and Spott just lets loose. Which feels like a remarkable thing to happen given the first 10 minutes. At times it sounds like the final level of the Acorn Electron’s game Arcadians, but really messed up and circuit bent. As the final armada of alien ships arrive the lazer fire is frenetic, and as the fleet speeds up in its descent the almost trance like sound of bleeps and bloops is turned into something slightly terrifying, slightly euphoric, but totally engaging.

To some Beef Lung is just 25 minutes of unrelenting harsh noise, but to others it is filled with rich melodies and complex undulating patterns. Some of the patterns last for a few moments and vanish whereas others appear and reappear throughout. But the album is much more. This is effectively an exercise in endurance. From the opening salvo of ‘Beef Lung’ to the final peels of ‘Beef’s Lung’ we are being pummelled with sheer noise, drones, glitches and everything else that Spott has to throw at us. But it isn’t unpleasant. At the end you get a feeling of accomplishment. You’ve engaged with something rather than just listened to it passively. And Beef Lung is an album to engage with. You meet it on your terms and take from it what you want.