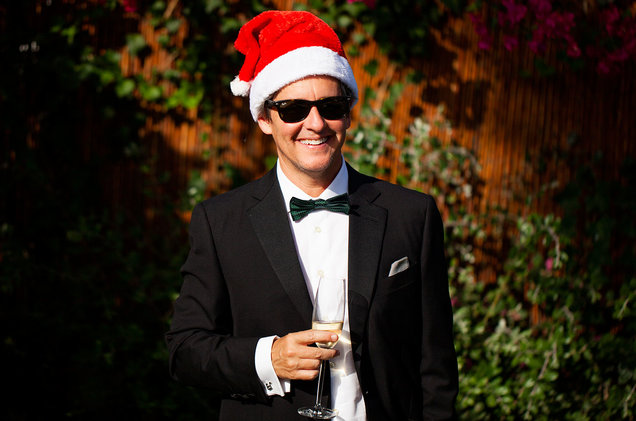 With his excellent new festive album The Holiday Sounds Of Josh Rouse freshly in the shops, Andy Page caught up with Josh Rouse to talk Christmas music, favourites of the year and future plans.

The new album, The Holiday Sounds Of Josh Rouse; I understand that it’s a collection of songs you have been putting together for a while?

Yes, for a long time. I think it was 2009 or 2010 that I started ‘Lights Of Town’, (from the new album), and then every year I just seemed to work on one; I’d have a new idea during Christmas and I’d say “Well, let me do something kind of holiday themed”, and having children and all that, we listen to a lot of stuff. You know, you’re cooking dinner and you put Christmas music on. My wife makes playlists, she likes Sufjan Stevens and the classics, and some of the more indie artists who do records and singles sometimes, and I said “You know, I should do one!” So it’s something you think about doing at Christmas, then Christmas goes away and you forget about it. So basically what happened is, over a span of eight years, I went back through my catalogue, through my ideas, and I thought “I think I’ve got almost an album here”.

And I understand that Nick Lowe was involved?

Actually, it was about three or four years ago, when I toured with Nick Lowe – he put one out in 2013 and I really liked it and that kind of kept my wheels turning. It was really cool that he was not doing the traditionals – he found some rare songs and put in a couple of originals, and made a cool record out of it. It’s something you can listen to any time, I was listening to it in March! So that was the concept, and we share the same manager. But he discouraged me from it – he said “Just do a single, a whole record is a lot of work”, but then he came back around to it last year when I told him I thought I could make a really cool record – he said “OK, let’s do it!” Now we’re regretting it, ha ha! No, it’s really going well – I wasn’t sure how the record was going to turn out, I thought the songs were really good and the music wasn’t really Christmassy, but the lyrics were all kind of centred around the holidays…and I knew that going in with the crew to make the record and doing it live would make this festive thing. Kind of cosy, jazzy, cool Christmas – that was the idea and I think that’s exactly as it turned out. I think people like it – whether they do or not, I’m happy with it.

So you did actually record it at Christmas then – I think it was the Phil Spector Christmas album (A Christmas Gift For You) where it was recorded in July or something!

We did it after Thanksgiving, in the holiday season, I wanted to keep with the spirit and then I think we mixed it in January, so we did it just three days after the holidays. So yes, I definitely wanted to do it around that time of year and the idea was that we would put it out the next year, but the idea was to try to capture the season, yes.

Was there any temptation to throw on ‘White Christmas’ or anything like that?

I did a bonus disc that the label asked me to do, just to have an incentive for people to get a physical vinyl or CD – they asked if I could do a couple of traditionals on a bonus disc – they said “Just you and an acoustic might be cool”, so I did that, I did three or four and (included) a couple of the demos that are four or five years old that I demoed in the studio with some guys here in Valencia, just to get some ideas down, and that’s on the bonus disc as well.

What are the first Christmas songs that you can remember hearing as a child? Is there anything that sticks out? Did you sing carols in the school choir?

Yeah, I was in the school plays and the school choir – I was Tiny Tim in Scrooge! But where I’m from in the mid-West, where I was born, we always had Christmas plays, so I sang in them. So yeah, just the kind of traditional stuff, and then my uncle played music, so every holiday with my family, my uncle would get the guitar out and play Christmas songs.

What is your own favourite Christmas song?

I would probably have to say ‘Linus and Lucy’ by Vince Guaraldli, the instrumental piano piece.

I have to admit I’m not familiar with that!

Yeah, check it out, it’s great! It’s from A Charlie Brown Christmas. That’s definitely my favourite Christmas album. When you hear that, you will think “I hear this stuff in Josh’s records!” You’ll get to the source there!

So away from the Christmas theme now, on your last album Love In The Modern Age, you went in a more synthpop direction – are you working on anything now for your next album?

I’m not – I’ve been touring a lot. I did this one last year and then I put out a couple of singles this year – I do have some songs that I am working on but I don’t really have any big ideas, I guess you could say! So I’m not really in that headspace yet for a new record, I have a busy month ahead and then it’ll die…then I have concerts next year. But sometimes I get too far ahead of myself and I don’t enjoy the actual record I just made and touring as I am thinking about the next one. As I get older I am slowing down and just trying to enjoy it.

How did those singles come about? (‘Trouble’ and ‘I Miss You’)

To make a record and to promote it for a record company and for everyone involved – you put a lot of work into it and spend a lot of money and it lasts for maybe a month. The record company’s hopes are that one or two of those songs catch on and get on a playlist and help everything out. The streaming model is dictating how record labels release music. I mean, I’ll still continue to make records but maybe I will put a single out in the Spring, which is fun; it’s nice for me that I don’t have to think about a whole concept, you know “is this record gonna work?”

And the touring plans for next year, is that just the US at the moment?

Right now yes, but I just thought today that March might be a good time to maybe get back over to the UK, and around Europe as well and do some touring.

Would you throw in any songs from the Christmas album?

No, I think I’ll leave it for the holidays! Unless everyone cheers for New York Holiday or something like that and then I would do it. Next year I might try to do a holiday themed show.

Have you ever considered putting any of the Bedroom Classics stuff out, for instance as a box set?

I’ve had a couple of people in touch – there’s a guy in Spain who used to put out my records here, outside of (current label) Yep Roc – when I first signed to Yep Roc, I said “I’ve got to leave Spain out of it”, but then it ended up becoming Spain too! But he was always trying to get me to put out a compilation – like Elliot Smith had a compilation of all his popular songs, or like An Introduction To Nick Drake; you know, I’m not a huge, famous guy, so something for your casual listener, or someone who hears you in an airplane or hears your music in a commercial – a way for them to get your most immediate songs, maybe 10 or 12 songs would be like ‘A Reintroduction to Josh Rouse’. So a couple of people have talked to me about it, but I’ve just never done it.

Did you have any involvement in the Rykodisc compilation that came out (The Best of The Rykodisc Years)?

I did – my manager put a lot of that together; they wanted to do it, so he said “Well ok, but let us curate it”, so yes. But I haven’t done one since then and that was up to 2005, so nothing covering the past 14 or 15 years! So I actually have five or six records since then, so I could definitely do another one.

Any music that you have been enjoying from other artists this year?

Yes, I went to see a band called Vetiver, they put out a a really good record (Up On High), that just came out. And then there’s a guy named Devendra Banhart – I went to go see him play, and I met him and he was a really cool guy – he put out a record not too long ago too (Ma, released in September). He puts out a record about every three years and he always does a good job with it. Who else…there’s so much great music in Nashville. I went to see Mark Kozelek, I’ve known him for a long time – he just played in Nashville and it was an incredible concert. About half the room left, but the concert for me was great! He had a piano player and a drummer and he never even picked up a guitar, he was just narrative. It was fantastic. Just great.

I’ve been going to a lot of shows lately – you know, for a while when I had kids who were younger, it was hard to get out, but lately I have been enjoying it more and more, just going to watch other artists perform and enjoying the live experience. In the past year I have really gotten into it, probably a couple of times a week I will go to see shows.

I also went to see Bob Dylan a couple of weeks ago and that was pretty good – couldn’t really understand him too much! But I’m a big fan of his. His voice has kind of gone.

Now of course, he has a Christmas album out as well…

Yeah, he did one. (*excellent impression follows*) He sounds like he’s smirking the whole time!

The Holiday Sounds Of Josh Rouse is out now on Yep Roc Records. (The red vinyl version with the bonus 12″ E.P. is particularly recommended!)