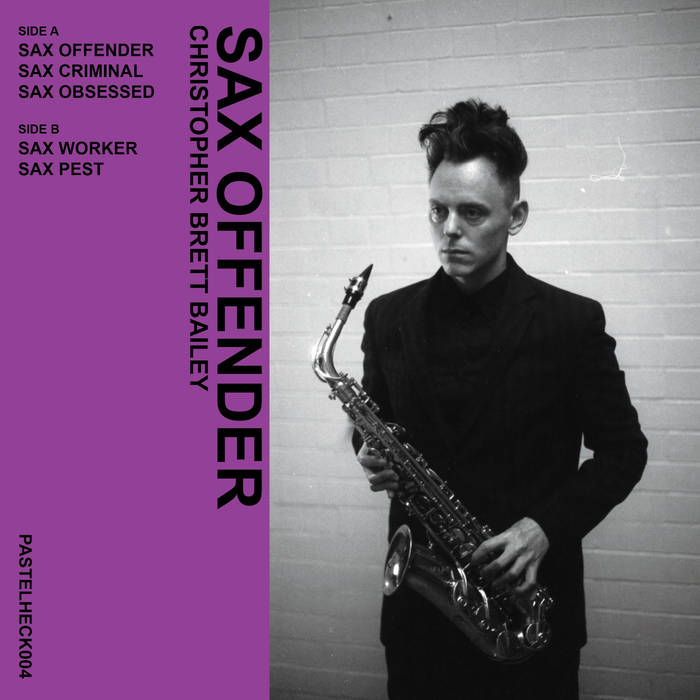 There is something about Christopher Brett Bailey that gets under your skin. Whether it’s his machine-gun spoken word pieces, the neo-classical Moon Ate the Dark, project or his visceral guitar assaults with This Machine Doesn’t Kill Fascists But Might Get You Laid, his work has a way of burrowing into your psyche. Maybe it’s his unflinching look at society coupled with deadpan delivery, or his ability to mix contrasting tones, but he has a knack of making your feel uncomfortable whilst being entertained. His debut solo album, Sax Offender, is no exception.

Sax Offender consists of five instrumental saxophone pieces that all have tongue in cheek titles, ‘Sax Offender’, ‘Sax Criminal’ and Sax Pest’. These range from minimal drones to full blown dissonant bangers. The album opens with the eight-minute beast ‘Sax Offender’. Here CBB lays the groundwork for the album, and shows what can be accomplished from a sax and loop/effects pedals. The main motif is short with haunting overtones. As it solely grows, and expands, you are pulled into a murky, sinister world. If you are reminded of Angelo Badalamenti’s Twin Peaks‘ scores, then you are on the right tracks. ‘Sax Criminal’ is a short affair, a sub 90 seconds romp. If ‘Sax Offender’ was about repetition, repetition, repetition, which most of CBB’s work is, ‘Sax Criminal’ is about space and there is loads of it. CBB’s sax feels like it was recorded in an empty cavernous room where his tones are allowed to roam free. And roam free they do. There is very little else on the track expect mournful sax solos, and it really shows that CBB is capable of delivering something seemingly unfiltered as crushing claustrophobic layered songs such as ‘Sax Offender’ and ‘Sax Obsessed’ can attest.

One of the most surprising things to ‘Sax Offender’ is how romantic it is in places. Instead of stark drones, the saxophone sounds warm with offerings of love. Given Bailey’s previous works this is both surprising and unsurprising in equal measure. Love, and relationships, are generally at the centre of his work, but he’s never been this open and tender before. Does this mean he is finally getting soft in his old age, or that for once he decided to let his guard down. Only time will tell, but one thing is certain Sax Offender is an accomplished album that shows its creator hitting a creative peak and delivering intense, thought provoking work whether it’s instrumental or not.